“It Could Never Happen Here”: The Most Dangerous Misconception in Survival 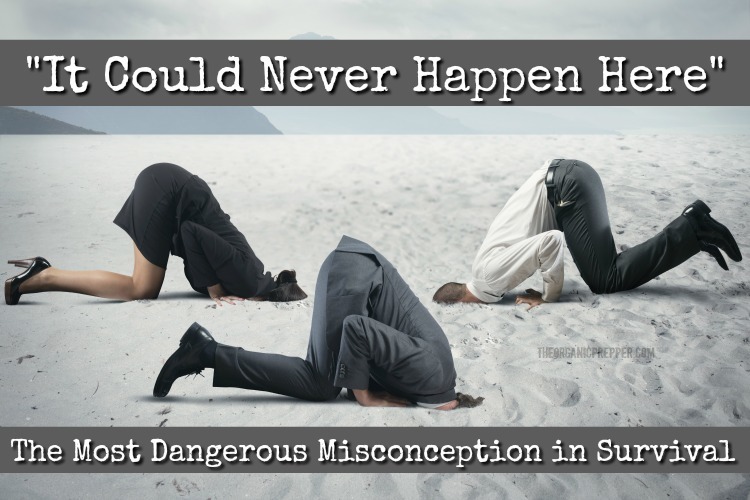 I’ve noticed a trend that is both interesting and troubling recently. It’s the prevalence of the philosophy of many Americans who adamantly believe, “It could never happen here.” This is probably the most dangerous misconception that exists in the survival world.

There is an attitude that the troubles of countries like Venezuela or Sweden or Bosnia or Syria are entirely the fault of every single resident of those places and because of this, we, the citizens of the United States of America, are completely immune to such events.

And that, my friends, is nonsense.

Sure, we may not have a socialist or communist government here. (Yet. But don’t think there aren’t factions who are trying to make that a fact.) Sure, we have guns and many of us are armed to the teeth.

But all of these countries suffering nation-wide misfortune have people who are proud to be of those places too. A sense of nationalism does not vaccinate one against corrupt governments, war, and economic destruction.

I absolutely love living in the United States and am proud to have been born here, but we can’t be irrationally blinded by a sense of American exceptionalism.

American exceptionalism has been historically referred to as the belief that the United States differs qualitatively from other developed nations because of its national credo, historical evolution, or distinctive political and religious institutions. The difference is often expressed in American circles as some categorical superiority, to which is usually attached some alleged proof, rationalization or explanation that may vary greatly depending on the historical period and the political context. (source)

Are we, as Americans, somehow the most exemplary people on the planet, merely because of where we are born? This doesn’t mean I hate America.

I think we have been provided with many opportunities and privileges in this country, but we are only human beings, just like the other human beings on this planet. Bad things can happen to us, too.

I have to wonder, is it fear that causes such an irrational sense of denial?

People are so blinded they refuse to accept advice.

Some people are so blinded by their ideal of American exceptionalism that they flatly refuse to take advice from those who have been through hell and back.

Some of the readers on my website (and others that republish my articles) get downright furious with guest bloggers from other countries. They are overly critical, for example, of my writer from Venezuela, Jose. They like to loudly claim how the things that have happened to Jose and other Venezuelans could never happen to them and are the direct result of personal weakness and cowardice. They condemn Selco, saying his country is a “third world shithole.” They ignore the advice of contributors from South Africa, and when I cite the troubles of European countries, they’re quick to blame the citizens.

It’s a sad and offensive perspective. We should be thanking our lucky stars that these people have the courage to relive their experiences to help us prepare should a similar catastrophe strike here.

Honestly, it makes me think that these folks who read survival websites and criticize those who have actually survived the real SHTF events we all plan for are really just another variety of the “sheeple” they all mocked during the Obama administration.

Sheeple (/ˈʃiːpəl/;[1] a portmanteau of “sheep” and “people”) is a derogatory term that highlights the passive herd behavior of people easily controlled by a governing power which likens them to sheep, a herd animal that is easily led about. The term is used to describe those who voluntarily acquiesce to a suggestion without critical analysis or research in large part because the majority of others possess a similar mindset. (source)

They like to talk about how the general populace is so unaware of things going on behind the scenes of government, or how manipulative and propagandist the media can be. But when they are faced with true stories and first-person accounts, they opt to bury their heads in the sand and say, “It could never happen here.”

It is much wiser, in my opinion, to read the stories of those who have suffered and learn lessons, than it is to smugly play Monday morning quarterback about the collapse of an entire nation.

It CAN happen here.

And maybe “it” is already happening. Before we scoff at the troubles of others and bury our heads in the sand, think about these events that have happened recently or are happening right now in the United States of America.

The list could go on and on, but we must face the fact that our nation is deeply in debt, more divided than we’ve been since the Civil War, and losing our humanity to our device addictions. It CAN happen to us. It IS happening to us.

Selco wrote an article a while back about how to tell when the SHTF was actually here (or near), and if this doesn’t look familiar, then I would suggest that you aren’t paying attention

Here are some of the signs that the SHTF has actually arrived.

Freedoms and rights are disappearing.

You usually feel like your rights and freedoms are something written in stone, and you may be right.

But in terms of signs of a coming huge SHTF, keep in mind that when your freedoms and rights that are really important are taken away from you, the S is going to hit the fan soon.

And again probably it is going to happen gradually enough that the majority of folks will not go out on the street to fight for those rights, and also, it may happen in a way that the majority of people will welcome it, under some new laws that “save lives” or “keep them safe” or similar.

But the result is going to be same. Your rights and freedoms are gonna be taken because you are gonna be easier to manipulate then.

Polarization, hate, and violence are on the rise.

I have mentioned all of that before, more then once, but prior to SHTF it is going to be worse when it comes to hate because again, a lot of stuff you cannot see clearly when you are in a state of hate or fear.

A lot of things can be moving in the background while you are coping with disorder, hate, and violence.

Your free access to independent information will be “shrunk”.

Independent media will be harder and harder to find, or you will be fooled and you will think that actually, you have access to free information while in reality, it is junk, propaganda.

The shutting down of free media and people who hold information will disappear. These are some of the last signs, and again, most people will welcome it. Independent media will be almost “demonized”. (source)

The SHTF is not just something that happens in other countries that are “lesser” than the US. If that’s the case, then why are you wasting your time and money prepping?

“It could never happen here” is the most dangerous misconception in survival.

If you are one of the people who has rudely insulted my writers, I sincerely doubt you’ll read this and recognize the error of your ways.  You’ll probably say, “Daisy is a jerk. I’m not reading her articles anymore.” (Buh-bye, then.)

You’ll probably get mad and wonder who the hell I think I am.

I’ll tell you exactly who I am.

I’m an American who doesn’t think she’s the exception to things that only happen “somewhere else.” I’m a person who looks for the wisdom of others who have been through the very events for which we prep.  I’m a person who offers respect to those who are willing to share the things they wish they’d known before their own life-altering disaster. I’m a person who doesn’t look down my nose at the very individuals who are doing their best to help us just because they happen to be from somewhere besides the US and therefore “deserve it.” I’m a mother who wants to learn and protect my family from the worst things that can happen.

Thank goodness, most of the readers here feel the same way I do and are grateful for contributions from folks who have been to Hell and brought back lessons for us.

There but for good luck and grace go I. 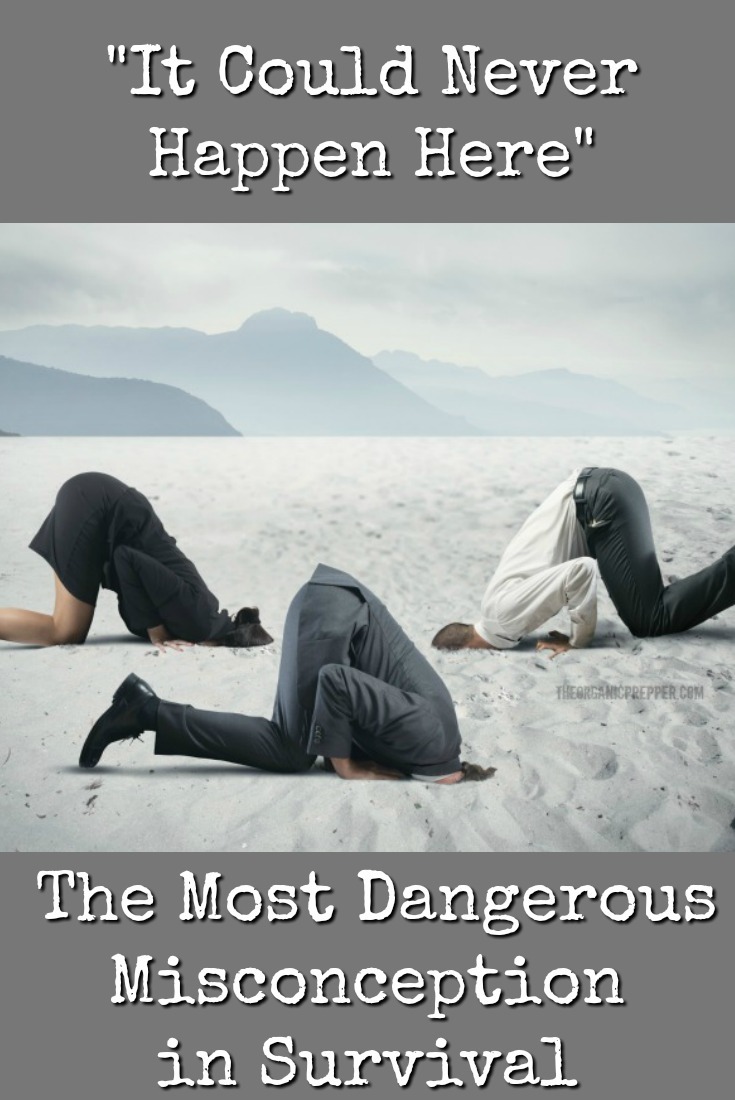