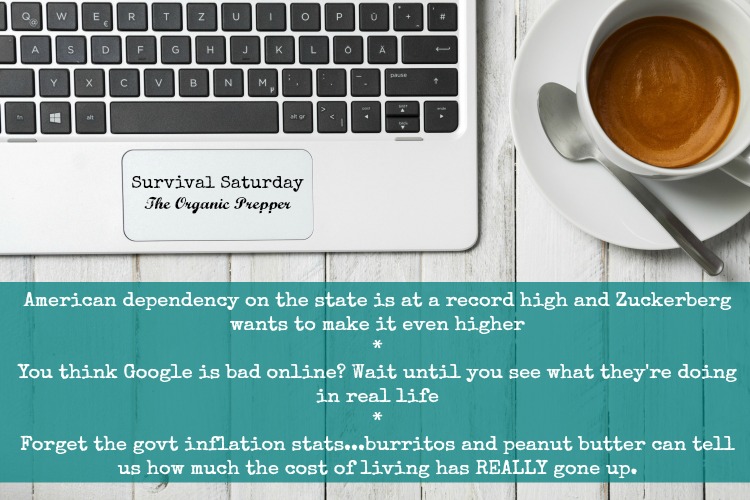 This week on Survival Saturday, what it all adds up to is that the net is closing around us. Freedom isn’t being lost – it’s being swapped for a little bit of money by people who don’t realize that it’s beyond price.

Survival Saturday: Freedom isn't being lost - it's just being swapped by the ignorant for a little bit of money.Click To Tweet

American dependency on the state is at a record high and Zuckerberg wants to make it even higher.

236 million welfare payouts are now made each month in America. (Some people receive more than one type of payment, so that doesn’t mean there are that many individual recipients.) It’s estimated that more than 100 million people are dependent on the state to survive.

How far down this road do we have to go before people start calling it “socialism”?

As I was writing this, I was reminded of one of Benjamin Franklin’s most famous quotes…

“When the people find that they can vote themselves money that will herald the end of the republic.”

In our country today, many politicians have discovered that one of the best ways to win elections is to promise the voters as much free stuff as possible.  This is one of the primary reasons why Bernie Sanders did so well.  Young people loved his socialist policies, and he received more votes from Millennials in the primaries and caucuses than Donald Trump and Hillary Clinton combined.

As older generations of Americans continue to die off, the Millennials will just become even more powerful politically.  And considering the fact that they are far more liberal than other generations, that is a very alarming prospect… (source)

And this is the tip of the iceberg. I’ve written before of my concerns about the Universal Basic Income.

But what would the real result of a Universal Basic Income be?

UBI would fast track us back to the feudalism of the Middle Ages. Sure, we’d be living in slick, modern micro-efficiencies instead of shacks. We’d have some kind of modern job instead of raising sheep for the lord of the manor.

But, in the end, we wouldn’t actually own anything because private property would be abolished for all but the ruling class. We’d no longer have the ability to get ahead in life. Our courses would be set for us and veering off of those courses would be harshly discouraged.

People will be completely dependent on the government and ruling class for every necessity: food, shelter, water, clothing. What better way to assert control than to make compliance necessary for survival? (source)

With that in mind, is anyone at all surprised that Mark Zuckerberg, the founder of Facebook and potential presidential candidate of 2020, is all for it? In his commencement speech to Harvard grads, whom you would think would be ready to get out there and take the world by the tail (okay, probably not with the indoctrination, but in theory), Zuckerberg told them he thought they should all just get a “cushion.”

“Every generation expands its definition of equality. Now it’s time for our generation to define a new social contract,” Zuckerberg said during his speech. “We should have a society that measures progress not by economic metrics like GDP but by how many of us have a role we find meaningful. We should explore ideas like universal basic income to make sure everyone has a cushion to try new ideas.”

Zuckerberg said that, because he knew he had a safety net if projects like Facebook had failed, he was confident enough to continue on without fear of failing. Others, he said, such as children who need to support households instead of poking away on computers learning how to code, don’t have the foundation Zuckerberg had. Universal basic income would provide that sort of cushion, Zuckerberg argued. (source)

American dependency on the state is at a record high & presidential hopeful Zuckerberg wants to make it even higher.Click To Tweet

If you think the entitled mentality is bad now, you ain’t seen nothin’ yet.

You think Google is bad online? Wait until you see what they’re doing in real life.

Anyone who uses Google as a search engine or Chrome as a browser knows that everything they do online is tracked and cataloged and sold to advertisers. But just wait, like the old Ginsu knife commercials, there’s more.

Now they’ll be tracking your in-store credit card purchases, popping them into the brain of their computers, and taking their spying to a whole new level.

Google rolled out the new tool at Google Marketing Next, an annual event geared toward advertisers where the company unveils its newest innovations in marketing. “Store sales management” works by pulling data from Google’s third-party partnerships, which capture approximately 70% of credit card transactions in the United States. The system then streamlines user information in order to generate reports automatically sent to merchants who opt in…

“Google says its computers rely primarily on log-in information, such as email addresses, to identify the people clicking on ads. It then matches that data with other identifying information compiled by merchants and the issuers of credit and debit cards to figure out when digital ads contribute to an offline purchase.”

…Miro Copic, a marketing professor at San Diego State University, told the Associated Press that “the privacy implications of this are pretty massive, so Google needs to tread very carefully.” (source)

Of course, our online privacy has been in its death throes for quite some time, culminating in March when Congress sold us out by overturning and FCC prohibition against selling our browsing and location data. This is really just another nail in the coffin of privacy.

Forget the government inflation statistics…burritos and peanut butter can tell us how much the cost of living has REALLY gone up.

Charles Hugh Smith wrote an absolutely brilliant article about real inflation. Not the ridiculous 1.6% that the government claims prices have gone up, but real numbers from real people.

Let’s face it – we all know that we are spending far more now to pay rent, tuition, and for groceries than ever before. The government says that our costs have only increased a little. “…the official inflation rate reports that what $1 bought in 2001 can supposedly be bought with $1.35 today.” But check out what Smith calls “the burrito index” and you will see that these numbers do NOT hold true for most of us in most situations.

I have my own inflation marker, which I’ll heretofore call the Peanut Butter Index. I absolutely love peanut butter and eat it almost every day. I keep track of food sales in a little price notebook and can go back for years and look at what I scored at specific sales.

About 10 years ago, I bought enough peanut butter to last me for three years of nonstop peanut butter consumption. I got my peanut butter for .99 cents per jar, and it wasn’t the little teeny jars, either. This was the natural, no-stir peanut butter that only has a touch of salt in it.

Now a jar that is a third of the size is $2.99 on sale. Those jars last only 3 weeks, too, which means that my peanut butter addiction has incrementally gotten a whole lot higher. What’s your inflation marker? What is something that you used to purchase that was reasonably priced but is now vastly out of proportion?

When you’re rich, as Smith points out in his article, things like the price of peanut butter increasing nine times over don’t really matter. $2.99 for a jar of peanut butter is the equivalent of throwing a handful of pennies into your kid’s coin bank. But for the rest of us?

That stuff adds up, and it isn’t going to slow down anytime soon.

Forget government inflation statistics...burritos and peanut butter can tell us how much the cost of living has REALLY gone upClick To Tweet

After a week of threats and the awful attacks in Manchester, UK and the Phillippines, be sure to stay alert this weekend. There will be many public gatherings in honor of Memorial Day and these can be targets. Read this article:

How to Survive a Terror Attack

In other preparedness news, my dear friend Gaye Levy of Backdoor Survival is retiring after running her site for 7 years. She has provided so many people with gentle, optimistic guidance during her time at the helm.

Personally, Gaye has served as a friend and a mentor for many years. No one works harder or more fairly than she and her retirement is so well deserved. She will be greatly missed by many of us.

Please go and check out her final article and wish her well on her next adventure.

Other prepping articles you may enjoy: