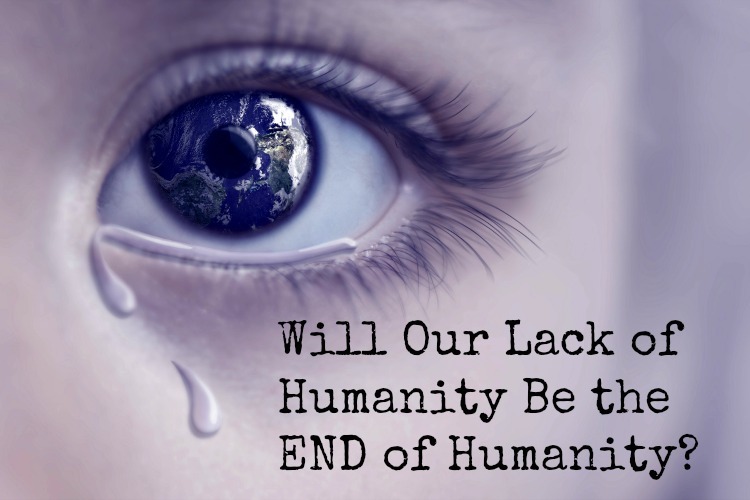 Sometimes I fear for humanity.

Not because I think an asteroid is going to wipe us all out or that Skynet is actually coming to fruition (it is!) or that aliens are going to take over the planet or that a pandemic will kill 99% of us.

But because of the utter lack of ethics, humanity, and compassion that I see every single day. Maybe the end of humanity is just that – we will regress to some animal mentality without that part of the brain that causes us to care for others and will exist only to satiate our need for food, water, and reproduction.

And if that sounds extreme, you haven’t been spending much time on the internet lately.

It seems that I can publish the most heart-wrenching thing and if it doesn’t fall in line with somebody’s political opinion, they can turn it around and say something that makes me doubt they even have a soul.

Or an atrocity is committed and if it’s done by a particular group’s political icon, it’s perfectly okay. It’s justifiable and they’ll provide all sorts of reasons why it isn’t really an atrocity.

But if that same atrocity is committed by “the other side” then suddenly it’s on the cover of Time Magazine.

I’ve received emails asking me how I manage to keep my sense of optimism when I research and write about terrible things every day of the week. Well, here’s the answer. It isn’t those terrible events that get to me.

It’s people’s responses to those events that sometimes shock me to my core.

Generally speaking, the commentary here on my blog isn’t excessively harsh. That’s just not the community we’ve created here, thankfully. You, my dear friends, are wonderful people with big hearts and you make everything I do worthwhile.

And if you aren’t one of those folks with big hearts, you are probably going to sincerely dislike my little rant of the day. There will likely be a surge in unsubscribes from people who think I’ve got a lot of nerve and I’m okay with that because this needs to be said:

BE A DECENT HUMAN BEING. DECENT HUMANS AREN’T HAPPY WHEN BAD THINGS HAPPEN TO OTHER HUMANS.

Sometimes when my work gets republished on other websites, the comments are a brutal, shocking glimpse at how some people think. People on social media LOVE to drop a nasty one-liner that provides me with solid evidence of what makes them tick. And what’s worse, those people are often busy staking their claim on the moral high ground.

It never fails when I write about California, a bunch of yahoos pop up and say, “Oh well, it’s California, I hope they all die.” I lived in that beautiful state for 5 years and loved the friends that I made there. Not everyone is an ultra-liberal from LA but the self-reliant libertarian types are greatly outnumbered. And for goodness sakes, not even the people with whom you most stringently disagree deserve to be burned alive in a wildfire or buried in a mudslide. But still, there are folks who chuckle and make a big joke about it. (This is a topic I wrote about previously.)

Or when I write about the misfortunes of someone who has found themselves suffering due to a socialist government in their nation, there are always people who gloat, “I don’t feel one bit sorry for that starving family. They got what they voted for.”

First of all, I’ve never in my life heard of a unanimous election anywhere. To suggest every person suffering under the rule of a bad leader voted for that leader is an assumption so broad as to be idiotic.  Secondly, does anyone ever actually “deserve” to watch their children die of starvation? ANYONE?  I’m not saying you must immediately dig out your wallet and send aid, but would it kill you to have a moment of empathy?

Or when I write about a woman who is a single parent (like me), there never fails to be a chorus of happily married women or smug men who criticize those single moms. They say that we shouldn’t have had children, we should have chosen better spouses, we need to find new husbands, or assume all our children have different fathers. They don’t consider that the children’s fathers may have died (like mine) or that things may have changed at some point in the marriage or that there are dozens of ways for a woman (or man) to have become a single parent and that none of those ways reflects on what that person or those children “deserve.” (This article I wrote about single parent preppers has some of the lovely comments I’m referring to on it.)

When a natural disaster strikes any area, there are always some people who roll their eyes and say, “Well, don’t live near the ocean if you don’t want to die in a tsunami/hurricane/shark attack.” Or they say, “I hope it was nice living there until the wildfire came and destroyed your home. If you live where there are wildfires, don’t complain when you get burned out.” Or, “That’s what you get when you live in a low-lying area. Insurance shouldn’t have to replace your home that was destroyed by a flood.” And on and on, never considering perhaps the person grew up in that area, has elderly family members who don’t wish to leave, or has a job that keeps them there in an economy in which good jobs are increasingly hard to find.

I was absolutely sickened when I read comments on other websites about Jose’s recent article about the mom with diabetes. They ran the gamut from criticizing her for feeding her diabetic son grains (it isn’t like she can just pop over to Whole Foods) to criticizing her for engaging in her pre-collapse profession to suggesting she never run an air conditioner to admonishing her to eat the family pet to proposing she engage in prostitution for some extra money.

I could go on and on about the things that I see here in Internetland but it really all just leads to one question.

What in the hell is wrong with people?

How did we get to this place of ugliness?

Is it just the internet that allows anyone to anonymously air their hateful points of view? Or is it that our society has devolved into something hideous and dark?  We can’t blame this on religion or lack thereof because many of the worst culprits in the examples I listed above consider themselves pious individuals who attend church regularly.

I believe that we have reached this point because we’ve been set up to hate one another. No longer do people just exchange pleasantries with the neighbors. And certainly not if that neighbor had a sign in their yard during the last election that makes you roll your eyes. The fires of moral outrage are stoked every single day on network news and on social media and on websites. And yet the responses are anything but moral.

How is it that at the same time we’ve reached peak absurdity with regard to political correctness we’ve also lost our sense of humanity? How is it that we see people who think differently as “the enemy” and that so many people revel in the misfortunes of others?

Some rules of engagement

Here are some new rules of engagement on social media to consider.

It’s quite simple. Ethics are standard and are not relative based on the political party performing the action.

If you can’t be a decent human being who cares about other human beings, you should realize that YOU are part of this crumbling society you like to complain about.