Is the Media Deliberately Trying to Spawn Civil War 2.0? 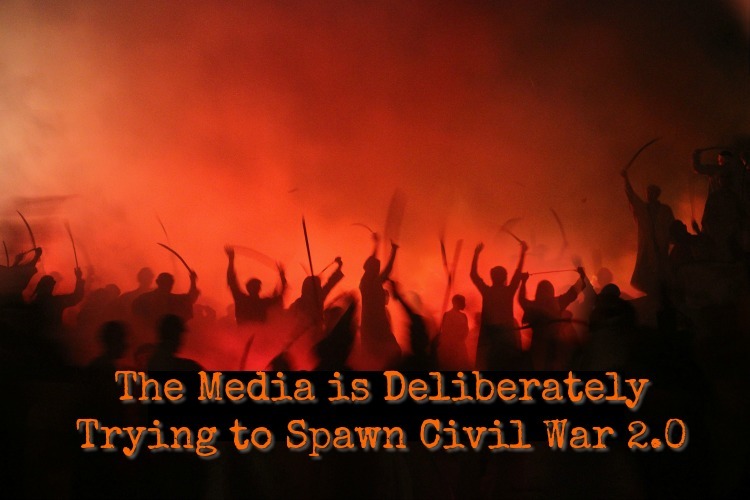 Everyone is talking about a looming civil war on American soil, but they’re all blaming the “other” side. The media is deliberately trying to stir things up with breathless headlines about how awful the “other” side is. And it’s working so well it could lead us right to Civil War 2.0. (Here’s what you need to know to be prepared for widespread civil unrest.)

The fact is, both the Left and the Right are to blame, threatening those who don’t have the same worldview. What it’s essential for us to keep in mind is that these are the opinions of the extremes of both sides. We in America have had conservative and liberal points of view along with everything in between for decades without the constant, looming threat of violence.

For example, Wendy Wolfe Herd, CEO of the dating app Bumble and a member of Forbes Magazine’s 30 Under 30, was the victim of a cyber attack launched by a “neo-Nazi organization” that posted Herd’s personal details online, as well as the contact information of her staff.

The cyber attack occurred a couple of weeks after the Charlottesville rally last August, in which a man was with charged with a federal hate crime after driving into the crowd of counter-protesters. Herd released a statement saying that her company was “joining forces to ban all forms of hate from Bumble including racism, hate speech, and bigotry.” She believes this is why she and her employees were targeted. Herd now travels with bodyguards.

At the same time, the Far Left is also stirring the pot and threatening dissenters with violence. Some guy named Hamilton Nolan recently posted an article on the “progressive” website Splinter that seemed to have referenced the politically-motivated bombings that took place during Richard Nixon and Gerald Ford’s administrations in response to the Vietnam War.  While some of his points about the warmongers in Congress are legitimate, he goes way, wayyyy off into the ether in his calls to action. Here are some excerpts from his essay, entitled “This Is Just the Beginning.”

This is all going to get more extreme. And it should. We are living in extreme times. The harm that is being done to all of us by the people in the American government is extreme.

… I do not believe that Trump administration officials should be able to live their lives in peace and affluence while they inflict serious harms on large portions of the American population. Not being able to go to restaurants and attend parties and be celebrated is just the minimum baseline here. These people, who are pushing America merrily down the road to fascism and white nationalism, are delusional if they do not think that the backlash is going to get much worse.

…Read a fucking history book. Read a recent history book. The U.S. had thousands of domestic bombings per year in the early 1970s. This is what happens when citizens decide en masse that their political system is corrupt, racist, and unresponsive. The people out of power have only just begun to flex their dissatisfaction. The day will come, sooner that you all think, when Trump administration officials will look back fondly on the time when all they had to worry about was getting hollered at at a Mexican restaurant. When you aggressively fuck with people’s lives, you should not be surprised when they decide to fuck with yours. (source)

Who even is this guy and why does he have such a platform? Literally, nobody I know has ever heard of him before this essay that is getting so much press, although apparently, he used to work for Gawker. He even got to post a follow-up essay with some of the familiar hatred from people who were outraged by his first essay. (And while I wholeheartedly disagree with Nolan, I can completely relate to the hate mail – the internet breeds some craziness and people think nothing of threatening your life and the lives of your loved ones.)

There was also an NYU professor who was proclaimed a “hero” by AntiFa for doxxing employees of ICE. I don’t like ICE anymore than these folks but posting their personal information and addresses online is nothing but a call for violence.

And after the Red Hen restaurant in Lexington, Virginia asked Press Secretary Sarah Huckabee Sanders to leave, some guy from West Virginia vandalized the place, allegedly throwing animal poop at the establishment.

“I can’t wait for the vigilante squads to start gunning journalists down on sight,” the right-wing nationalist told Observer over text message, in response to a longer feature in development about an Upper East Side restaurant he is said to frequent.

When asked to elaborate on who specifically had upset him, Yiannopoulos explained that the statement was his “standard response to a request for comment.” (source)

Today, in a horrifying attack on the Capital Gazette newsroom in Annapolis, Maryland, a gunman opened fire on journalists. There are multiple fatalities, the gunman has been identified as a white man in his 20s, and no further details are known at this time. (source)

Politicians are getting in on the hate-mongering too.

Politicians are getting media attention from the hullabaloo as well.

Most notably, Congresswoman Maxine Waters, who I swear is only famous for her sh*t-disturbing ways, has said that anyone who disagrees with her should be treated horribly, particularly those who work for the current administration.

If you see anybody from that Cabinet in a restaurant, in a department store, at a gasoline station, you get out and you create a crowd and you push back on them, and you tell them they’re not welcome anymore, anywhere.” (source)

Threats against Republican politicians have skyrocketed, leading to speculation that this is the impetus behind quite a number of sudden early retirements.

I’m not really a fan of Democrat OR Republican politics, but the pattern here seems to lean toward the threatening behavior coming from the Left side of the aisle. If anyone has some credible links about Republican members of Congress recently making calls for incivility against the Democrats, please post them in the comments and I’ll update the article.

And big surprise, the media is pushing this narrative.

It’s essential to note that the threats and anger have been going on for quite some time now. But it seems like there is a whole lot more of it because it’s the topic du jour in the mainstream of late. Just like Selco warned us in his recent article, the media has an agenda and they are playing us like a violin. If there is a Civil War, you can be sure that those in the MSM are every bit as responsible for stirring up the hatred and division as the people who hacked Herd’s website and the dude who wrote the essay I cited.

In no way am I saying that anyone should target members of the media, as happened today in Annapolis, Maryland. Violence only begets more violence. What I’m saying is that you need to be aware of what is happening.

Look how neatly they are making us hate and fear one another.

I guess my question is, are you going to let yourself be manipulated?

If we are directly threatened, we absolutely must defend ourselves. It’s our natural human right to do so. But politics? Bumper stickers? Don’t be a snowflake. You don’t have to engage in the hate.

We need to look at the individual people and we need to ignore the media that tells us they’re the enemy. Maybe they want to drum up a war, but we can be the majority who stops it. We can refuse to participate and take the bait.