If You Think the Water Restrictions in California Are Tough, Check Out Cape Town 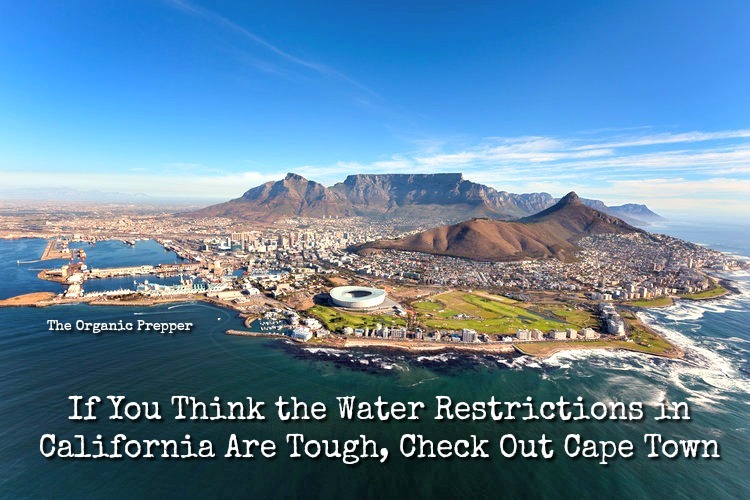 Remember earlier in the year when the news was abuzz about Day Zero in Cape Town, South Africa?  According to the press at the time, the day was looming when the city of 3.74 million people would run completely out of water. First, the date of Day Zero was heralded as April 16th, then May 11th, then June 4th.

Calculating Day Zero took into account maximum evaporation (based on temperature and wind) and existing patterns in agricultural and urban use—an equation that considered both natural and man-made conditions. (source)

Now, they’re saying the disaster has been averted for now, but that it could happen in 2019. And if you think the water restrictions in California are tough, wait until you see what they’re doing in Cape Town.

So how did Cape Town avoid Day Zero?

Day Zero was delayed by a combination of things. Fortunately, there was some rainfall, and citizens went to great effort to reduce their water usage.  There was a public campaign to basically scare Capetonians into compliance with conservation efforts.

Late last year, as the South African government faced the prospect of its largest city running out of water, they took an unprecedented gamble.

The government announced “day zero” – a moment when dam levels would be so low that they would turn off the taps in Cape Town and send people to communal water collection points.

This apocalyptic notion prompted water stockpiling and panic, caused a drop in tourism bookings, and raised the spectre of civil unrest.

It also worked. After years of trying to convince residents to conserve, the aggressive campaign jolted people into action. Water use was (and still is) restricted to 50 litres per person per day. (In 2016, average daily per capita use in California was 321 litres.) Households that exceed the limit face hefty fines, or having a meter installed in their home that shuts off their water once they go over. (source)

Oh, and then there was the public shaming.

…The city publicly shamed water offenders, with the now former mayor visiting the homes of water wasters and her office publishing a list of the top 100 offenders. (source)

There’s even a website where you can check the levels of the water supply.

How people in Cape Town are cutting their water usage

Welcome to the new norm.  🙂

Here in Cape Town, we came VERY close to running dry. We are still not out of the woods by any means, the city can still run out of water in 2019 onwards unless we stop relying on just the rain.

You can use more water, but then these things happen:

1) You get billed some serious money for the extra water.

2) If you continue, your flow can be limited with a device to just 50l pppd.

3) And if you keep on ignoring the above, they can take legal action.

There are some seriously clever things we were forced to do.

I now realise the amount of water we, as a city, wasted before.

So, obviously, I was dying to know the clever things they were forced to do. There are some fantastic lessons for preppers in all this because if you one day live in a world in which all the water you have has to be procured and carried to your home, you’ll want to conserve or you’ll be hauling water non-stop at our current rates of usage.

Jaco from Cape Town continued with some comparisons to the restrictions recently launched in California:

To give you an idea:

– An 8-minute shower uses about 17 gallons of water

o We are on 90 second showers if you have to shower per day. People are not showering per day anymore.  🙂

o Catch all the shower water, use if for the toilet.

– A load of laundry uses about 40 gallons of water

o Changed the soap, so we don’t have to use the rinse cycle – that is another 50l.

o ALL the water is pumped into a drum, used for toilets. Use pool HTH to keep the smell at bay.

o Some people have changed their washing machines, to use <40l per wash with rinsing.

o Those days are gone, no really, forget a bath.

o If you have to bath, better have a sponge bath.

o Catch the water for the toilets.

– A dishwasher uses 6 gallons of water

o Nope, 2.5-5l per wash. Better swap the dishwasher for a German model that saves water.

o Or, use rainwater.

And a lot of things are now completely illegal. For example:

Illegal to water the gardens. Have had to let plants die, rather get local fauna and flora that can grow In the area.

Illegal to wash your car.

Illegal to top up your pool. Pool must have a cover. Use rainwater or order grey water from the council.

The cost of water has gone up dramatically:

Because the municipality is now earning substantially less due to less water purchased, the rates per kilolitre went up substantially.

The key is the reuse of gray water, something that very few places in the United States are doing.

We found that ALL the grey water we generate, not kitchen grey water, can be used for the toilets.

That is the biggest saving. Not one drop of clean water goes down toilets, as all the taps feeding the toilets are closed off.

The trick is, ALL greywater must be used for toilets.

Without toilets flushing, sickness will enter the equation.

Do not flush clean water down a toilet, ever.

Invest in portable pools or water tanks, and use that water for like washing clothes, then to toilets.

Jaco’s excellent suggestions and information could be very valuable for those facing shortages now or in the future.

Unsurprisingly there was government mismanagement involved.

When I asked about the postponement of Day Zero, the answer was something we can all relate to. Some corrupt person or persons had mismanaged the utility and all but bankrupted it. And with all the hubbub about Day Zero, tourists were staying away from Cape Town, making a bad problem even worse. Jaco wrote:

#DAyZero went away because it costed the local economy too much due to less tourist.

AND, it turns out, the National Department of Water and Sanitation, was mismanaged to the tune of millions of Rands, effectively bankrupt, which was THE biggest problem, bar all missing the warning signs the last few years…

So instead of losing more income and making the ANC look even worse, the politicians “agreed” to suspend DayZero – for now.

The problem however, is still very real.

Dam levels are slowly rising, but if the dams are not full by end of the year, DAYZero is looming in 2019.

Some schemes are online, but in the end, they will not be enough. Need bigger desalination plants.

And, we have not reached the set 450mil of water per day for the city as a whole.

So the 50 gallons, yes, you are barking up the wrong tree – it is going to get much worse.

People HAVE to change, not only preppers.

A global water crisis isn’t that far of a stretch of the imagination.  Michael Snyder of The Economic Collapse Blog has been warning about it for years.

For generations, we have been able to take our seemingly endless supplies of fresh water completely for granted, but things have now changed.

We are heading into a horrendous water crisis unlike anything that the world has ever experienced before, and right now there do not seem to be any large scale solutions capable of addressing this crisis.

Hundreds of millions of people living in North Africa, the Middle East, India and parts of China already deal with severe water shortages as part of their daily lives.

But this is just the beginning.

If nothing is done, the lack of fresh water will eventually be deeply felt by nearly everyone on the entire planet. (source)

The use of water has quadrupled over the past century and with our growing population, shows no sign of slowing down.

How do you prepare for a global water shortage?

This will affect us not only with forced restrictions like we’re seeing in California but with escalating water bills. Obviously, that will be much more of a deterrent to the poor, since the wealthy won’t have a problem paying the high prices. Some projections on a government webpage that is no longer available suggested that we could see our water bills as much as triple over the next 25 years.

Meanwhile, one must ask whether companies like Nestle will be able to drain our lakes for pennies and sell the water back to us for dollars.

So what can you do to be better prepared for a situation like this? Not only must you worry about hygiene and personal consumption, but if you have gardens, orchards, and livestock, you’ll need more water for producing food.

A few things to look into:

Do you feel that we’re on the edge of a much bigger water crisis than just the one in California? If not, why not? If so, what are your ideas for prepping for it?