Are We Overdosing on “Hopium?” 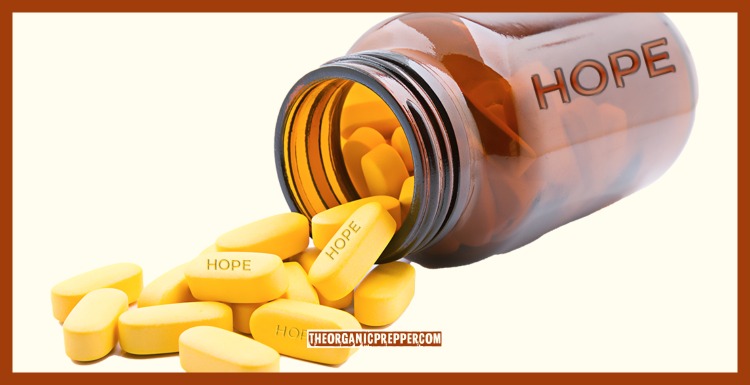 I am a prepper. I became a prepper in large part because I am a “dangerous conspiracy extremist.” Why? Because I am one of those people who listens to what the power elite tell us they’re going to do, then take them at their word and prepare for it. Many people have been exposing this longer than I. However, I still put 13-plus years of my life into researching and exposing the globalist agenda.

Almost none of what happens today is a surprise to me because it’s been bragged about for generations. After many years of learning about their agendas and conspiracies, this is the world as I see it. So take it with as many grains of salt as you wish.

As a prepper, a stoic view of reality is necessary to see reality for what it is at present. And it is essential to learn how it got to this point and predict what direction it will take in the future. We can then be adequately reactive and proactive in adapting and overcoming what is and what will happen.

Overdosing on “hopium” or succumbing to normalcy bias can be detrimental to the point of suicide.

Naturally, it would benefit us if rosy assessments of the current reality were accurate or confirmed in the end. No one, least of all me, wants to live on a giant slave planet where the masses of humanity are so inured, so helplessly dependent on the system, that they willfully submit to enslavement. Nor passively stand by while the population is culled by elites who believe they have the right to determine we are unworthy of life itself and all the inherent rights that come with it.

Social media’s echo chambers magnify a statistically insignificant portion of the population speaking up and resisting. We comfort ourselves that this will all end soon if we expose the agenda to enough people.

Strike now, while the iron is hot

Many, such as the ordinarily great Larken Rose, claim the warp speed advancement of the globalist agenda signifies their panicking that humanity is awakening. Quite frankly, those claims are delusional and indicative of too much time spent inside social media’s echo chambers. Or, a cynical desire to make as much money as possible while the gettin’s still good.

Those claims are also indicative of a steadfast refusal to believe the Establishment can carry out such conspiracies even though they’ve had a monopoly on creating and distributing fiat currency for over 100 years. And have, during that time, literally bought the entirety of society. If you want an ironclad example of that fact, consider how they just stole a general election. The Establishment (the courts, Congress, state legislatures, media, and everything in between) destroyed any attempt to expose the fraud or prosecute those responsible.

The fact of the matter is, they’re moving quickly now because they’ve previously underestimated how firm their grasp is on the minds of humanity.

All across America and the developed world, businesses were ordered to close

I’m not sure if anyone can say what percentage or how many tens or even hundreds of thousands of small businesses shuttered under government orders and never opened again. Anyone who had to work, who didn’t have the luxury of sitting on their couch soaking up 24/7 news coverage while raking in far more in unemployment than they earned working, saw the hypocrisy of being forced to shut down. At the same time, Walmart and the big corporations were declared “essential” and remained open, yet they closed down anyway.

We all knew if they and their customers had each others’ backs and said “NO” en masse, there would be nothing the government could do except pound sand.

The heroes who did say no were quickly singled out to be viciously harassed, fined, and often destroyed. Whether the people believe the current scam du jour, their belief in authority, their identity as a “law-abiding citizen” is a yoke that will cripple them every time. Disobeying even the most vicious and unlawful edict is unthinkable to them.

People will say no…until they don’t

Government officials are coming under increased scrutiny for continuously moving the goalposts.

When does this end? Why must this go on? They cannot and will not answer because this is not about a virus. Yet when we are told we must lockdown again, especially when the triple mutant variants arise (which they’ve repeatedly bragged is coming – they’re such sages!), people will bend the knee. Again.

As for the vaccine, it’s coming out in the mainstream that vaccine resistance is rampant. That would be good news on its face if not for what’s coming down the pipeline – vaccine passports and tracking. It is part of the agenda that you’ll be completely locked out of the Great Reset if you refuse the vaccine.

They won’t be “mandatory” in that SWAT teams will accompany a doctor to your house to force you at gunpoint. You won’t have access to the new digital currency that is being developed. And, like a social security number, birth certificate, or driver’s license, employers will not hire you without up-to-date proof of vaccination.

People will say no to the vaccine right up until they look around at everything they own, at their children, and see no alternative but to take the shots. At that point, it will be too late for counter-economic solutions like agorism and prepping.

Your thoughts are not your own

Let me assure you: if you think you’re not mind-controlled, you definitely are.

The globalists are not moving forward because they’re scared. They’re moving forward because the initial reaction to the scam was perfect. I believe COVID-19 was a test run. But it went so flawlessly, so swimmingly for them, that they decided to fast-track their plans. For example, the pandemic wargame known as SPARS 25-28 mirrors the present situation perfectly in all aspects. And, as its title suggests has been moved up five years (watch 2023!) Because why put off for tomorrow what you can accomplish today?

Now is not the time to give up or give in

What I witnessed in my hometown gave me no reason to hope that there is an awakening. On my social media accounts? Sure. Lots of people refusing masks, refusing vaccines, opposing the scam. But in the real world, mind control, as epitomized by Hitler’s maxim, repeat a lie often enough, and it becomes the truth, eventually broke them down. The peer pressure got to them. Even today, several weeks after the mask mandate was lifted in my state, probably two-thirds of people still voluntarily wear masks. They’re a fashion statement, after all, found on the end-shelves of every aisle of every store.

The lesson here, as I see it, is this: do not give in to hope.

There isn’t time. This is the endgame, the finish line, and many are acting as if the starting gun just went off. Fall on your sword for your friends and family if you wish. But you are almost certainly doomed to get sucked into the same black hole.

The Reset button has been pushed, hell on earth has been unleashed

And no one can un-push the button.

Even if they are aware of the scam, most people think they’ll say “no” and carry on with their lives. Those people have not been paying attention to what globalists have been saying for many decades now, much less this last year. (Follow the World Economic Forum’s tweets, and you can predict the future – they have that kind of control). Their words are now a reality – here, now.

We had one final chance to stop it last year. But the mass closure of small businesses for months on end, which, again, we could have prevented if we all refused, along with one-third of all the money created by the Federal Reserve in its 108 year history made in the last year, was a crippling, deadly blow.

As preppers, what must we do?

If we do not succumb to delusion, we must adapt ourselves to the agenda. We must create our own Reset. The old world, that old life we knew, is gone. It’s been stolen from us. We miss the opportunity to “build back better” in our own lives if we cling to that which is dead and gone. If we are steadfast and resist the globalist reset, we must understand our actions’ consequences if we are ready to die on that hill.

Those who refuse and resist face two choices: be forced off-grid when the new currency becomes unavailable because we will need vaccines to work, bank, and shop. You will not be able to pay your mortgage and will lose your home. Not all of us are lucky in our family and friends. Especially post-Reset, when they may be facing the same struggles you are, or, worse, buy into the Reset and disavow you.

Or we unplug from the technocratic slave matrix on our terms. I don’t know about you, but being at the mercy of others is not a place I want to be, and so obviously, I have chosen the latter. That is a subject for another time.

As Eomer tells Aragorn in The Two Towers, “Look for your friends, but do not trust to hope. It has forsaken these lands.” It is a dark place to be, for sure. But many of us as preppers have long predicted these days, and they are here.

They are here. Act accordingly.

How are YOU unplugging from the system?

Are you taking steps to get out of the system before there’s no way out? What steps are you taking to increase your resiliency and reduce the ability of others to coerce you? How are you becoming more self-reliant? Let’s talk about it in the comments.

Kratos has been prepping for civilizational collapse of various types since the 2007-08 economic crash, when, studying its economic causes, came to the horrifying conclusion that the next collapse was not only inevitable but would be final. He implements and integrates survival, prepping, homesteading, agorism, and VONU to increase resiliency, build networks of interdependency, decrease vulnerability to coercion, and, as Camus said, “become so absolutely free that [his] very existence is an act of rebellion.” Connect with him on MeWe and on Bitchute