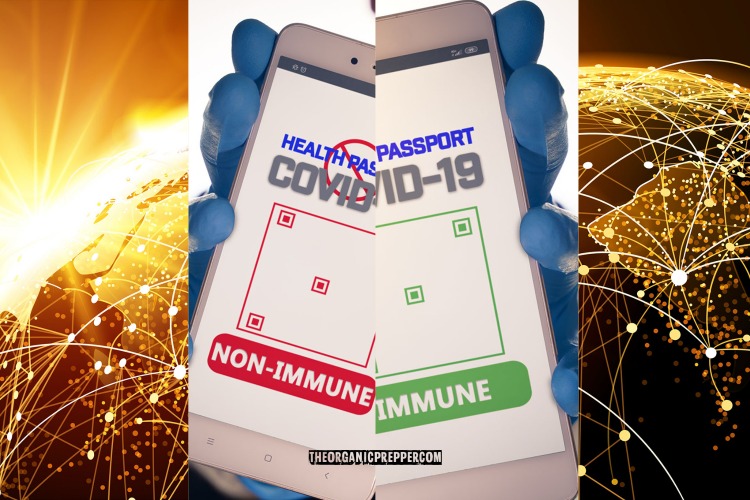 For those of you who thought the pandemic hysteria and the totalitarian results from it would magically disappear after Joe Biden’s inauguration, you were, well…

As I wrote about in this article, there are currently two existing vaccine passports options, one being operational in the United States right now:

If you’ve ever left a pet at a kennel while you travel, you may be familiar with the process of proving your animals have had their shots against things like rabies and kennel cough. Now, it appears that humans, too, will have to prove they’ve “gotten their shots.”

While we’re certainly not objecting to anyone who wants the vaccine being able to get it, this push to make it essential to live a somewhat normal life is concerning for a number of reasons.

New York has begun a pilot program for their vaccine passport.

Always the first to pounce on a new opportunity to protect people from Covid (unless they happen to be nursing home residents), New York has begun a trial of a vaccine passport app.

New York officials are testing a new mobile app that could be your ticket into places like Madison Square Garden and Barclays Center as the state slowly reopens venues for sports, concerts and other events.

The Excelsior Pass works much like a so-called “vaccine passport.” The app, developed in partnership with IBM, uses encrypted smartphone wallet technology to prove a person’s recent negative COVID-19 test or confirm they are fully vaccinated against the virus.

Gov. Andrew Cuomo touted the app as a way to fast-track the safe reopening of theaters, stadiums and other businesses that operate in densely populated settings.

“As we begin reopening the valves on different sectors of our economy, we are putting guidelines in place to ensure individuals attending events involving larger gatherings have tested negative for COVID or have been vaccinated to avoid an outbreak of the virus,” Cuomo said in a statement Tuesday. “The Excelsior Pass will play a critical role in getting information to venues and sites in a secure and streamlined way, allowing us to fast-track the reopening of these businesses and getting us one step closer to reaching a new normal.” (source)

Thus far the app was tested at Brooklyn Nets game at Barclays Center on Feb. 27 and again on Tuesday during the New York Rangers game at Madison Square Garden.

Of course, your personal health data will be perfectly secure.

The global pandemic crackdown is continuing apace, particularly in the areas of travel

Denmark and Sweden are already announcing they are developing systems for “digital vaccine certification,” aka “vaccine passports.” These digital certifications allow travelers to prove they have received the COVID vaccine. The plan is to create and maintain a record of anyone who wants to travel both domestically and internationally to countries that require proof of vaccination.

Claims are the plan is to accelerate air travel and assist in the “revival of national economies.” Morten Bodskov, Denmark’s acting Finance Minister, has stated that an online registry will be operational by the end of February, and it should be fully in place by around June.

Thomas Bustrup of the Confederation of Danish Industry told CGTN Europe he saw the registry taking the form of a phone app. The app would include the following three pieces of information:

Sweden is also looking at a similar plan and timeframe to Denmark. Sweden’s Digital Development Minister, Anders Ygeman, stated, “With a digital vaccine certificate, it will be quick and easy to prove a completed vaccination.”

Both Sweden and Denmark stated the system’s scope could eventually be widened to include attendance at sporting events and “cultural events.”

As is typical when long-planned agendas unfold, other European nations are looking at rolling out the same system. Cyprus, Czech Republic, Estonia, Greece, Hungary, Iceland, Italy, Poland, Portugal, Slovakia, and Spain have all announced plans to unveil a similar vaccine passport system.

The European Council has also taken note of the system. However, it has yet to make any official decision, saying in a statement that: “Leaders agreed to work on a standardized and interoperable form of proof of vaccination for medical purposes. Leaders will determine at a later stage in what circumstances these certificates could be used.”

The British government is also considering a vaccine passport system

As The Evening Standard has reported, vaccine passports for travel are on the way.

A Covid vaccination certificate that could unlock holidays abroad is on the way, the Transport Secretary disclosed today.

Grant Shapps revealed that talks are under way with governments, including the United States and Singapore, and the United Nations aviation body about an international system to help people who have had the Covid-19 jab to fly.
“Just as we have things like the yellow fever card… I imagine that in the future there’ll be an international system where countries will want to know that you’ve been potentially vaccinated or had tests taken before flying, before you come in,” he told the BBC Radio Four Today programme.

But the Cabinet minister warned the public it is “too soon” to book summer holidays yet — and he even suggested that staycations in the UK could be in doubt.

“The truth is we just don’t know how the virus will respond to the vaccines,” he told Sky News.

Indeed, the British government has taken contradictory stances on vaccine passports in the past several weeks.

However, CBS Travel Editor Peter Greenberg does not doubt that vaccine passports will be required to travel. “It will be required,” he said. “The real question is what technology will be available to create a universally acceptable and universally readable document that can’t be forged.”

“Some governments are doing it,” he added. “Denmark is creating a digital passport for citizens that will contain all your current medical information that can be updatable on that digital card.”

CNN has been promoting the idea as well. For instance, in a bizarrely written article where the author labels the concept of “vaccine passports” as “reassuring,” the article shows that documentation requiring vaccination to travel is something that is coming down the pike. CNN writes,

The words “vaccine passport” have a reassuring ring to them, perhaps conjuring up the image of a sleek, embossed document with watermarked pages and official stamps of approval. Flourished at border controls, it would open travel doors that, for so many of us, have been closed by Covid-19.

Some destinations — including the Seychelles, Cyprus, and Romania — have already lifted quarantine requirements to visitors able to prove they’re vaccinated. Others, such as Iceland and Hungary, have opened up to people who’ve recovered from Covid-19.

This raises the prospect that proof of inoculation or immunity could be the golden ticket to rebooting travel and seems good news for people eager to book summer vacations after months of lockdown, particularly as vaccine rollouts gather pace.

They could open up the restaurants, bars, cinemas, and other leisure and entertainment facilities whose closure over the past year have left many teetering on the edge of — or already victim to — financial ruin.

Required vaccines and other procedures are just the beginning

Requiring vaccines, biological manipulations, and medical procedures before allowing access to essential services, entertainment, or travel has been a long-held idea. In fact, conspiracy theorists tried to warn us about mandated vaccines. (See Brandon Turbeville’s previous article on the Social Credit System).

As early as May 2020, “Contact Tracer” and “Disease Investigator”  jobs opened up across the United States, to track those who may have been exposed to COVID-19. Weekly COVID tests were reportedly in the works for the UK offering a “Passport to Freedom.”

Now we finally see a vaccine passport system being rolled out, and, for many, it is surreal. As costs and difficulty mount for “proving” that you’re healthy, it’s a concern of many that only those with money will find their lives returning to some type of “normal.”

At this point, all I can say is to hold on to your hats

What are your thoughts on required vaccines for travel? What about sporting events? Have you been vaccinated? If not, do you feel pressure or plan to do so?