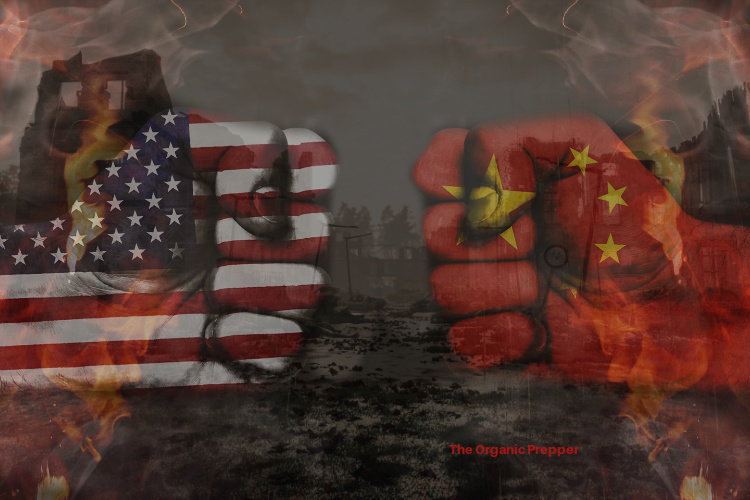 October 14, Chinese President Xi Jinping appeared in Chaozhou City on a visit to the Marine Corps in the Southern province of Guangdong. He addressed the soldiers there and urged them to “maintain a state of high alert” and “put all [their] minds and energy on preparing for war.”

He urged soldiers to be “absolutely loyal” and “reliable” in these times. Jinping did not elaborate on why he needed to voice those words now. He has also recently made and delivered more aggressive and direct statements by CCP members and even Chinese military members.

Why would Chinese President Xi urge soldiers to prepare for war?

It may surprise many readers that the Chinese President would be so bold as to suggest that war is on the horizon. After all, it’s undeniable that the United States, Western Europe, and the United Nations built China from the blood-soaked nation of Communist horror that it was into the industrial powerhouse that it is today.

Western nations, particularly the United States, did so by sending essential manufacturing jobs to China. The U.N. allowed China to join the WTO as a “developing” nation. That description still maintains today. Despite all the international assistance China has received in building itself up to today’s powerhouse, China has always preferred to play the long game. Preparing to become the leader of the world’s affairs and eventually even dominate the United States.

Is China on the verge of becoming the world’s superpower?

After the United States squandered its credibility, economy, and manpower in wars overseas, it seems even more likely China will do just that. The United States’ struggles may be just the opening China needs to advance the Made in China 2025 strategy, an attempt to become the world’s superpower in technology, manufacturing, and cybertechnology. Part of their strategy is to buy up Western businesses.

While the West has been shipping jobs overseas, even manufacturing sectors that are important to national security like medical supplies, China is poised to assume its global standard-bearer role. China has been preparing to take the United States down for at least twenty years.

Since ancient times, China has been known for its military philosophies.

“Unrestricted Warfare,” the book written by two Chinese colonels, Qiao Liang and Wang Xiangsui, focuses on how China can defeat an opponent seen as technologically superior, such as the United States.

Keep in mind Unrestricted Warfare was written in 1999, before China’s leap forward in technological and military development. Still, the book does not focus on direct military vs. military war doctrine but a victory with the absence of military involvement. Keep in mind this book and its description of these tactics was written twenty years ago. (An updated version was made available in 2017, but is only available on Kindle in the United States. in Europe, however, you can also buy the updated version in paperback or hardcover.)

What are some of these 20-year-old methods mentioned?

Trade War – “Some of the means used include: the use of domestic trade law on the international stage; the arbitrary erection and dismantling of tariff barriers; the use of hastily written trade sanctions; the imposition of embargoes on exports of critical technologies; the use of the Special Section 301 law; and the application of most-favored-nation (MFN) treatment, etc., etc. Anyone of these means can have a destructive effect that is equal to that of a military operation.”

Notice that the authors mention trade wars, which are taking place today between China and the U.S. A “trade war” became a necessity if one wanted to claw back the jobs sent to China decades ago since China would not let them go back willingly. It also points out how removing tariffs and “Most-Favored-Nation” trade status used as weapons.

Financial War – What is more, such a defeat on the economic front precipitates a near-collapse of the social and political order. The casualties resulting from the constant chaos are no less than those resulting from a regional war, and the injury done to the living social organism even exceeds the injury inflicted by a regional war.

Many have suggested that WWIII would be an economic one. China was clearly paying attention to the Western tactics used worldwide then (and currently still being used) to destroy sovereign governments who refused to follow Washington’s dictates. Today’s China has been hard at work with the same tactics, creating its version of the book’s foundations.

This characteristic invariably puts national forces in an extremely unfavorable position even before War breaks out, since national forces must always conduct themselves according to certain rules and therefore are only able to use their unlimited resources to fight a limited war.

Many terrorist organizations and attacks, such as the simultaneous attacks on the U.S. embassies in Nairobi and Dar es Salaam are mentioned in this portion of the book. Also mentioned are terrorists using new high technologies combined with their other methods. The authors even said these new technologies would evolve into superweapons.

Terrorism and urban warfare described in these paragraphs may have seemed impossible to create on a massive scale in the United States before and even after 9/11. However, decades of economic decay, destruction of the family unit, degradation of the education system, mainstream media, and social media outlets have combined to create the perfect storm for violence. One need only look as far as the recent battles in most major American cities’ streets to see that such urban warfare and abject chaos are beginning to take hold in the United States.

Ecological War – Ecological War refers to a new type of non-military warfare in which modern technology is employed to influence the natural state of rivers, oceans, the crust of the earth, the polar ice sheets, the air circulating in the atmosphere, and the ozone layer. By methods such as causing earthquakes and altering precipitation patterns, the atmospheric temperature, the composition of the atmosphere, sea level height, and sunshine patterns, the earth’s physical environment is damaged or an alternate local ecology is created. Perhaps before very long, a man-made El Nino or La Nina effect will become yet another kind of superweapon in the hands of certain nations and/or non-state organizations.

This one is interesting. The Chinese military knows and is willing to speak openly about a human-made superweapon used to damage the earth. Meanwhile, Western governments continue to claim this is “conspiracy theory” nearly twenty years on.

Are there any other tactics mentioned?

China is contributing and benefiting from America’s chaos

Brandon Turbeville warned of these strategies in his articles, where he pointed out the Chinese long game. Like the United States, it is a game of empire, but it is the tortoise instead of the hare.

China has finally seen the finish line. America is burning its credibility overseas with each bombed dropped, and it is wasting its valuable resources in the process. It is drumming up hatred and driving developing nations into the arms of China as it threatens and proceeds to overthrow sovereign governments.

Though improving under the Trump administration’s meager implementation of Americanist policies, its economy is a shell of its former self. The American people are more divided than ever, thanks to the insidious mainstream corporate media.

Has a war started without a shot being fired?

China did not cause any of this, but we have to be smart enough to realize that it is and will continue to benefit them and they will take advantage of it.

As an American, watch nearly every aspect of the tactics listed in the “Unrestricted Warfare” book take shape before your eyes and ask yourself, “Has the potential war with China already quietly started without the shooting?”