Will China Use Economic Insecurity to Buy Up Stakes in the US and Europe? 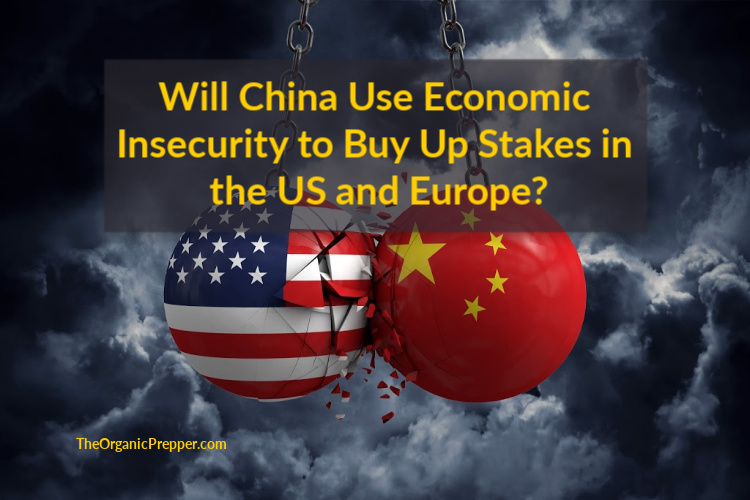 It’s no secret that the Western World is dealing with an economic crisis of epic proportions right now due to the COVID-19 pandemic that is believed to have begun in Wuhan, China. Here in the US, businesses and families both are struggling to remain afloat, even as the government doles out trillions of dollars.

Our struggles may be just the opening China needs to advance the Made in China 2025 strategy, an attempt to become the world’s superpower in technology, manufacturing, and cybertechnology. Part of their strategy is to buy up Western businesses.

Foreign Policy reports that over the past few years, China has invested billions of dollars in Europe and North America, with most of that money going into mergers and acquisitions as opposed to starting new business ventures themselves.

And now our economic woes may give them the opportunity to snap up more businesses at bargain-basement prices.

This, of course, is a national security issue.

Our vulnerability was made all too clear recently when China suggested on state-run media that they could easily halt the export of medications and medical supplies to the United States as we were on the cusp of dealing with the COVID-19 pandemic.

Also according to the US CDC officials, most of the drugs in the United States are imported, and some drugs are imported from Europe. However, Europe also places the production base of these drugs in China, so more than 90% of the US imported drugs are Related to China. The implication is that at this time, as long as China announces that its drugs are as domestic as possible and banned exports, the United States will fall into the hell of the new crown pneumonia epidemic. (source)

The jist of the article was that the US, if not the entire world, owed China an apology due to our media coverage of the outbreak in Wuhan and comments made about the outbreak by government officials. In fact, not only did the Chinese government feel the world should apologize to China but that they should thank China because they “made huge sacrifices, paid huge economic costs, and cut off the new crown virus.”

We rely heavily on China for not only medical imports but also food, electronics, mechanical parts, and many more essential products. You can see a more thorough list of what we currently import from China here.

Think about how reliant we are on a country with whom we have enmity. Who thought that was a good idea? At least the US has finally begun taking steps to put a halt to the discreet takeover.

In the United States, the government has woken up to the national security implications of losing sensitive capabilities to China; the Committee on Foreign Investment in the United States (CFIUS) now plays a very active role in screening potential takeovers on national security grounds. (Last year, it famously forced a Chinese company to reverse its acquisition of the gay dating app Grindr.) (source)

But now, due to the pandemic, the United States is currently facing shortages of many of the goods we used to regularly get from China. Meanwhile, we’re also on the verge of an economic collapse.

So, will China take advantage of their head start on recovering from the virus? There’s little doubt that they will. In fact, there’s evidence they’ve already begun to do so.

Europe does not have a program like CFIUS, but they’re quickly seeing the need for one.

Bloomberg reports that China-based banks are already seeing a spike in requests from Chinese outfits interested in acquiring European companies.

Many Western governments have already passed business aid packages to make sure companies don’t go under. But that’s not enough. Margrethe Vestager, the European commissioner for competition, has just proposed that governments buy stakes in vital companies to prevent Chinese takeovers. They will also need to screen Chinese raiders taking advantage of the coronavirus.

As for the EU, Sven-Christer Nilsson, a former CEO of the Swedish telecommunications giant Ericsson, told Foreign Policy that “it absolutely has to establish a CFIUS, as do the individual member states. We can’t wait, or we will see the Chinese giving offers companies can’t refuse.” (source)

China is said to be particularly targeting Northern Europe, where many innovation-heavy smaller businesses are located.

We need to reconsider what industries are matters of national security.

Ruth Smeeth, who was until last November a member of the British Parliament’s Defense Committee, says we need to redefine what constitutes national security.

“If we have learned anything from the current crisis, it should be that the definition we have been using of national security has been insufficient…Our world has changed beyond recognition, and by default so have our core industries. Our mergers and acquisitions policies need to reflect that.” (source)

Even with CFIUS, Foreign Policy suggests that the US is not safe from Chinese investors.

The American CFIUS, in turn, needs to rethink what constitutes national security—ventilators clearly do. They must also ask if national security is the only criterion for rejection. Indeed, takeovers should be screened too for the damage they could do to the economy. (source)

It isn’t a stretch of the imagination to think that companies who are desperate to stay afloat would be willing – or even eager – to take Chinese investments to do so and it’s important to note that China has been buying up American tollways, ports, and property since the 2008 crash. In allowing that to happen, we could be opening the gates to an enemy that will take over from within, a bloodless coup that is only recognized when it’s too late. We absolutely can’t allow such a thing to happen.

If you think we’ve got problems now, just imagine what things would be like if China owned more of our economy than we do.

You have to wonder if striking while times are difficult was the plan all along.