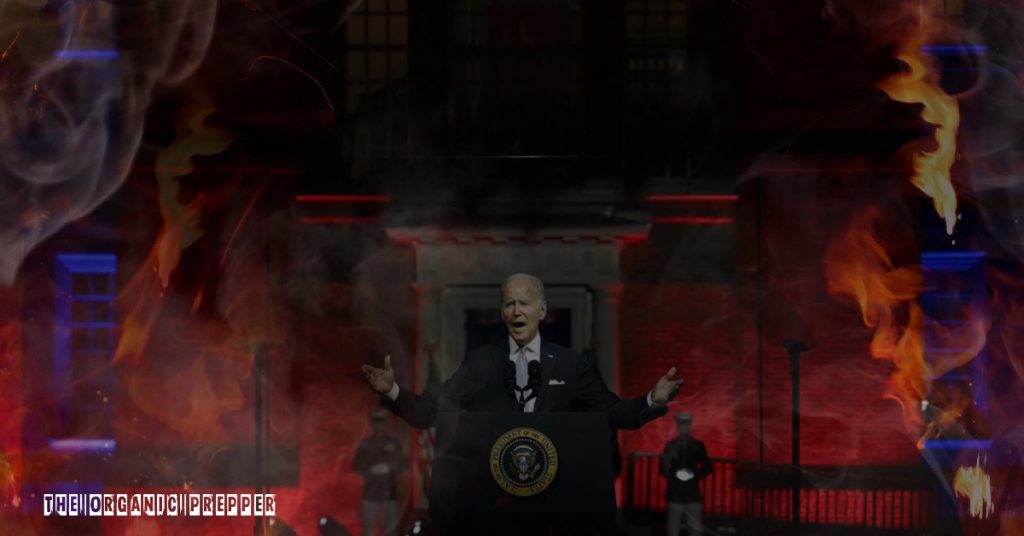 On Thursday, September 1, President Biden gave a speech urging patriotic Americans to unite against the MAGA forces bent on destroying the nation. I’m not being hyperbolic; watch the speech here. Set against a red backdrop, flanked by Marines, the drama of the scene would have been kind of funny if it wasn’t so serious.

But I’d like to offer some food for thought regarding this spectacle. We’ve talked about Professor Mattias Desmet’s theory of mass formation psychosis a few times here at the OP, but I’d like to revisit it in light of Biden’s ominous speech. Situational awareness is vital to prepping, and we need to understand the attempts being put forth by our government and corporate leaders to guide our thoughts and actions. If we’re not aware that we’re being handled, we can’t think rationally about what’s in our own best interest.

If you’ll recall, Prof. Desmet cites four pillars as necessary for a society to move into mass formation. They are:

4. Free-floating aggression and frustration without options

Once those four pillars are present, mass formation is present.

How susceptible are Americans?

So, have there been any major improvements in any of these areas in the last six months, rendering us less susceptible to mass formation?

Not really. Outside of China, there are no big lockdowns right now, but the lockdowns in 2020 and 2021 permanently changed the way people live and do business. Work, school, and churches have all changed, and not in ways that bring people together.

Many people still work remotely, and it’s looking like the full return to 2019 office life will never happen.

Schools across the country have reopened, and most of us live in areas that have dropped mask mandates and testing requirements. I’m in a blue state, and even here, most parents are just over it. However, ongoing disagreements in some districts over shot requirements and masks reveal that the tension has not completely disappeared.

Church attendance may also never return to pre-2020 levels. Church has always been a great way for people to socialize, but things like mask mandates and safety concerns regarding food have sparked countless disagreements within the churches that have managed to stay open.

While the appearance of normal life has returned for many of us, issues that arose during 2020 have not gone away. This new, seemingly endless source of arguments is still keeping us divided and isolated.

How about Desmet’s second pillar of mass formation: meaning in life?

Most people find meaning through some combination of work and family relationships. How’s the workforce right now? You could write books on this, but let’s just focus on quiet-quitting.

Quiet-quitting is the antithesis to hustle culture, where your workplace persona is the foundation of your identity.    For a long time, workplaces tried to foster a sense of teamwork and camaraderie, but the lockdowns broke a lot of that. Some people wondered why they should bust their tails when a sizeable portion of the population collected paychecks and was touted as “heroes” for couch-surfing and watching Tiger King. Others decided to reevaluate their priorities and put their kids at the top of the list rather than their boss.

Now, for the last two points, the free-floating anxiety and the feeling of having no options. The prospect of recession probably says all we need to know about our collective states of anxiety.

While there has been debate over whether or not we’re already in a recession, even optimistic mainstream sources are admitting we’ll probably slide into one in 2023. Other credible economists are predicting financial catastrophe in the next year. Regardless of where you fall on the optimism spectrum, it takes either strength of will or deliberate ignorance to avoid some level of financial anxiety right now.

So, what does this all have to do with Biden’s fear-mongering spectacle of a speech we saw last week?

Totalitarian states need scapegoats. In 2021, we saw this with the Othering of the unvaccinated, as Daisy wrote about last year.

Early in 2022, worldwide frustration with various Covid edicts mounted, and governments began to quickly drop mandates. However, almost as if on cue, the Russians invaded Ukraine, giving our leaders a new villain to point fingers at.

Why are gas prices so high? Putin.

Why are there so many supply chain issues? Putin.

The OP discussed this, as well.

Now, six months into Russia’s invasion, Westerners are burning out.

The U.S. has pledged over $54 billion in various forms of aid to Ukraine, as we watch our own prices for food and rent increase month after month. People are emotionally and financially exhausted.

The elites need a new bad guy, and now Biden is trying to sell us on hating the “MAGA Republicans.”

I tried finding an exact definition of MAGA Republican, and other than some vague blathering about “semi-fascists” by the new press secretary, I couldn’t find anything specific.

I think that’s probably the point. When you keep your villain vague and in the shadows, you don’t give the opponent something clear to stand against. You just spread this unease vaguely associated with Republicans.

This is a classic straw man argument and another attempt to get the American people into a state of mass formation.

Biden’s calling these people MAGA Republicans but he, or the people pulling his strings, really have any dissidents in their crosshairs. Look at the way independent journalism has been targeted. We’ve had our share of problems at the OP. So have Matt Taibbi and Glen Greenwald, who used to be darlings of the political left. In some ways, this targeting of dissident leftists is most disturbing because it reveals that this isn’t just Red vs. Blue politics as usual.

In Boris Pasternak’s classic novel about life during the Bolshevik Revolution, Dr. Zhivago, one of the characters, Strelnikov, is a fantastically committed and successful military leader for the Communist cause. And yet, near the end of the book, he commits suicide rather than be executed by the Bolsheviks.

Why would the Bolsheviks execute one of their best military leaders?

Because he was loyal to the ideals for which he thought the Party stood, not the Party itself.

We can look at the currently disgraced left-leaning journalists the same way. Regardless of whether or not you stand with them on certain issues, we cannot ignore that people who try to tell the truth as they see it are being punished, no matter where they are on the political spectrum.

This is not politics as usual.

Continue to monitor your own emotions. Are you getting so angry about politics that you’re beginning to lump people into “other” categories yourself? Make a point of talking to people so that you can continue to see them as individuals rather than as members of a group that may or may not be really pissing you off at the moment.

If you really want more insight into the process by which totalitarians take over society, I strongly recommend the book The Psychology of Totalitarianism by Mattias Desmet. It gives a lot of insight into the political theater currently taking place.

And above all, don’t let yourself get sucked into hate and anger. There have always been good books, friends, and healthy schools of thought to help people navigate difficult times. If we can understand what’s going on around us, we can plan not only for our physical well-being but for our mental, spiritual, and emotional health as well.

What are your thoughts? Do you have an opinion on the speech? Did you find it divisive? Do you feel that even more enmity is forthcoming between Americans? Let’s discuss it in the comments.

A lover of novels and cultivator of superb apple pie recipes, Marie spends her free time writing about the world around her