Are Lockdowns Saving Lives? Or Are They Destroying Them? 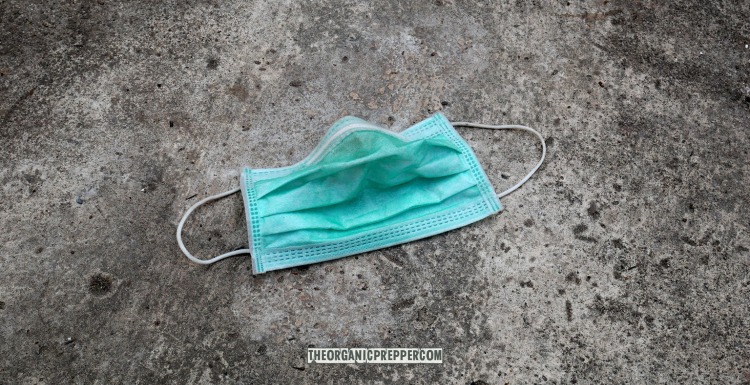 Most people would agree the pandemic and oppressive government lockdowns caused a dramatic escalation in mental health issues. A healthy person, confined to their home, with limited to no human contact, is likely to experience severe strain on their mental health.

While the virus itself has a low fatality rate for most demographics, lockdowns can push people of all ages over the brink. This article is not meant to criticize anyone who has chosen to isolate themselves or mask up. It merely explores the effects of mandates on the general population and is based on peer-reviewed studies and publicly available statistics.

Is America headed for another lockdown?

After the CDC recently revised its guidelines for vaccinated people, many local and state governments nationwide brought back mask mandates and restrictions for many Americans. Will lockdowns soon follow?

Politician Mitch McConnel warned, “These shots need to get in everybody’s arms as rapidly as possible, or we’re going to be back in a situation in the fall that we don’t yearn for – that we went through last year.” [source]

And what was that situation? For many, it was a state of lockdown. If the lockdowns worked so well the first time, why are we returning to such policies? A policy of lockdown is a blatant violation of human freedom, the U.S. Constitution, and what it means to be an American.

If lockdowns and masks are effective why is there a need for these mandates?

We have large meta-analyses to show us that masks don’t work and that diagnosed cases rise in many locations after mask mandates. Here are a few facts on masks:

UPDATE: To see a list of studies that say masks both DO and DO NOT work, see the end of this article.

On September 11, 2020, the CDC’s Morbidity and Mortality Weekly Report showed 85% of those who contracted COVID during July either:

The report went on to show that over 70% of those infected reported consistently wearing masks, while only 3.9% of those testing positive for COVID reported never wearing a mask.

Furthermore, for the sake of consistency, shouldn’t cars be banned as well?

According to the CDC, as of July 14, 2021, there were 288 alleged deaths due to COVID that week. Yet within the four days of May 28-31, the National Safety Council predicted that 415 people would die due to car accidents.

Why do we care more about one cohort than we do the other? Following COVID logic, massive roadblocks set up nationwide, a ban on all vehicles, drastic speed limit reductions, and mileage restrictions would make perfect sense. Wouldn’t it?

Confused? So is everyone else.

Now you have counties such as Los Angeles becoming the first major county in the US to reinstitute mask mandates. LA already has a history of backtracking on its COVID decisions, and here again, we have county officials toying with the confidence of their constituents.

People, vaccinated or not, must now wear masks in all indoor public spaces. Many business owners are asking customers to comply, and many aren’t. It seems as if the non-compliers have the edge here, however. Sheriff Alex Villaneuva has publicly stated he will not have his officers enforce mask mandates, pointing towards such mandates not being backed by science and a waste of police resources.

If you don’t have enforcers, what do you have?

Australia’s citizens forced back into lockdown with even harsher restrictions.

Though Australia’s infections and deaths are well below other developed nations, as of July 20, nearly half the population of Australia is back in lockdown. Now under extended lockdown, Sydney continues to see cases rise, and Melbourne is currently in the second week of its 5th lockdown. The recent highly policed lockdowns have fueled anger and given rise to anti-lockdown demonstrations.

Although the lockdowns do not seem to reduce infections, New South Wales Police recruited 300 military personnel to enforce the lockdowns. Australian authorities recently imposed harsher restrictions in Sydney, forcing people to wear masks outdoors and go no further than 3 miles from their homes.

In Queensland, citizens aren’t even allowed to go out on their balconies, and that they need to tape them shut in the fight against COVID. Chief health officer of Queensland, Jeanette Young, issued an order requiring photographic proof of one’s having done so. Now, residents have been acting as grassroots Gestapo, photographing and turning in citizens who refuse to comply.

Two hundred fourteen people were recently forced into quarantine simply because one individual ended up sick in a hospital. The forced quarantine happened in Adelaide, Australia, where a grand total of 4 people have died who have had a COVID diagnosis since last year.

PwC’s recent Return on Action Report 2021 reveals one in four Australians now struggles with mental health issues. The survey used for the report, conducted in February 2021, showed concerns over mental health have now surpassed those of the tough economic conditions.

Overall, the findings of these and other reports reveal that one in five Australians is experiencing high levels of anxiety and stress directly linked to the pandemic. As Covid continues to take its toll on the mental health of Australia’s citizens, the government announced a $17m Health Package to support those most affected.

For those who aren’t sure…

If perhaps anyone reading this is still unsure of whether the pandemic and its lockdowns are causing severe mental health problems and possibly damaging lives irreparably, please watch the following video for a real-life synopsis of how this has affected small business owners. [source]

Carly’s heart-wrenching video has since been removed from Facebook.

A summary of various studies exploring the effects of the pandemic and its impact on mental health states:

Since its initial outbreak in late 2019, the COVID-19 pandemic has profoundly affected the global community. In addition to the negative health consequences of contracting COVID-19, the implementation of strict quarantine and lockdown measures has also disrupted social networks and devastated the global economy. As a result, there is rising concern that the pandemic has taken a toll on the general population’s mental health. [source]

Many of the studies reviewed also showed there has been an increased prevalence of depression and anxiety disorders, suicide risk, post-traumatic stress symptoms (PTSS), and insomnia.

What are the main causes of stress and anxiety during lockdown?

And of course, don’t forget the fact that while the lockdowns bolstered giant corporations, they destroyed multitudes of small businesses and devastated the personal finances of many Americans.

What are we doing to our children?

Further alarming is when you realize five times more children committed suicide within the U.K. than died from diagnosed COVID last year.

After over a year and a half, the CDC finally dropped the PCR protocol

For over a year and a half, top virologists, doctors, and healthcare workers worldwide stated the PCR test is inaccurate, too sensitive, and did not measure what it was supposed to. Many were labeled conspiracy theorists for doing so, facing professional admonitions, disgrace, and even job loss.

After all that, the CDC finally dropped the PCR protocol.

A large number of public policies directly impacted many as a result of PCR tests. Perhaps someone lost their job or was forced into unemployment. Another person’s children were not permitted to go to school. Someone’s father lay dying in the hospital, and no one was allowed to see him.

Why? Because cases were skyrocketing? No. The reality is faulty PCR tests resulted in elevated numbers. Don’t believe me? Three datasets analyzed out of New York, Massachusetts, and Nevada concluded: “Up to 90% of the people who tested positive did not carry a virus.” [source]

Children could not go to school nationwide. Reports said kids had to stay home for their safety and the safety of others because they are sources of infection. Then, John Hopkins conducted a study of 48,000 children.

As COVID-19 cases in the U.S. rise, deaths have remained relatively flat.

Updated daily, the CDC’s Covid Data Tracker is where you can access maps and charts tracking cases, deaths, and trends of COVID-19 in the United States. There is also a Weekly Review summarizing the weeks findings. As of July 23, 2021 the data shows:

You can access data charts for each individual state here. 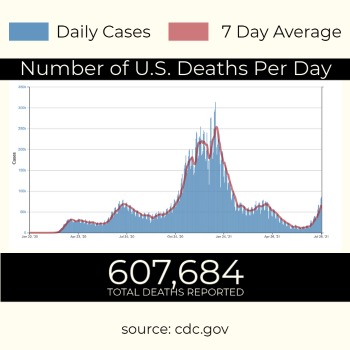 Are the new mask mandates and lockdowns necessary? Were they ever? Have you lost anyone to Covid, and if so, did it change your opinion of these mandates? Let’s discuss this (civilly, please) in the comments below.

Mask Studies – they do work: 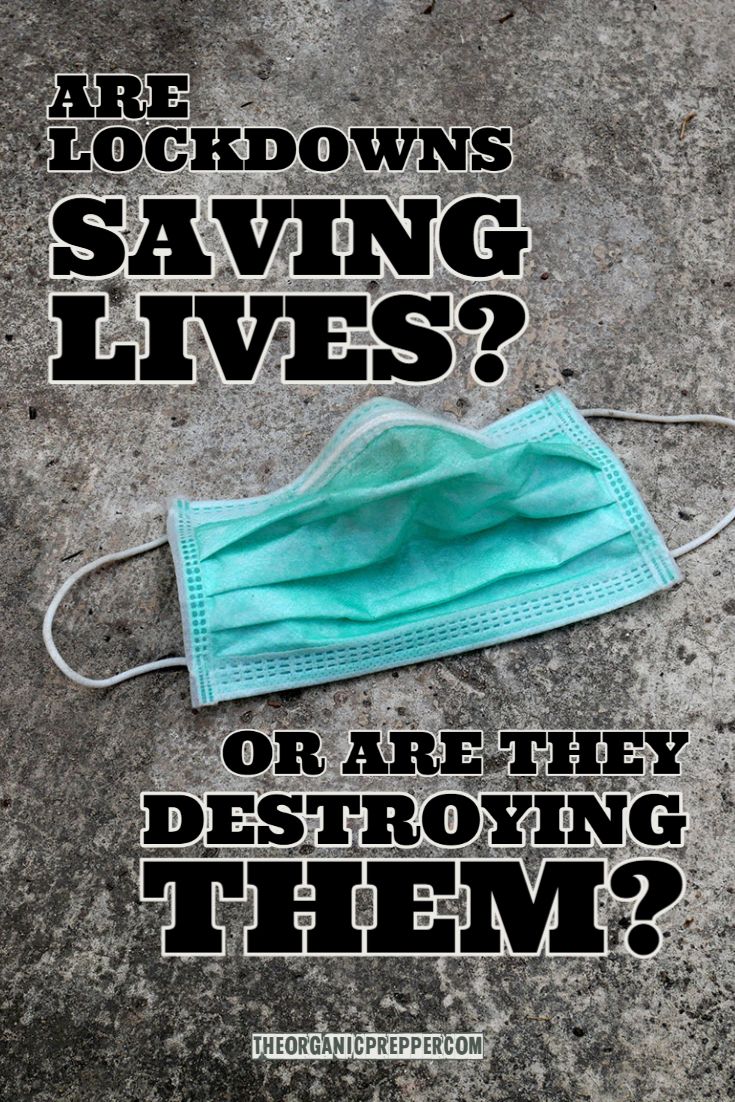