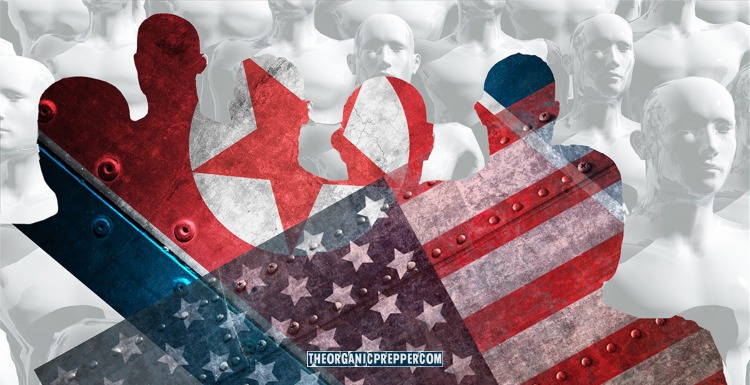 We interrupt your regularly scheduled brainwashing for a dose of reality for a brave young woman who defected from North Korea in a brutal journey so she could be free. Eventually, she made it to the US to attend an Ivy League American school.

Yeonmi Park has seen firsthand where the United States is headed….and it’s straight to North Korea if we don’t make changes soon.

Anyone who saw the movie “The Interview” recognized that under the farce there was a lot of truth. Kim Jong Un is a brutal dictator who will not allow citizens to access the internet or learn anything about critical thinking. The propaganda in North Korea is rampant – both anti-American and pro-North Korea.

For example, there’s a long-running cartoon shown to schoolchildren called “A Squirrel and Hedgehog.”

Yet we should not forget that films and cartoons in North Korea send an ideological message. Usually it is very simple: all the army, the party, and the people follow the unsurpassed leaders of Mount Paektu in their march from victory to victory against the mortal enemies of the Korean people willing that the wicked American imperialists, the evil Japanese claimants of territory, and their south Korean puppets suffer defeat-after-defeat, bringing ever closer the day when they will be erased from the face of the planet.

The least ideological material on North Korean TV happens to be children’s cartoon series, the most well-known which is called “A Squirrel and Hedgehog”.

The story is quite simple. There is a community of good animals who live on Flower Hill, but they are attacked by an evil Weasel Legion. The Flower Hill animals respond by sending a brave squirrel named Goldie agent to infiltrate the Legion. Goldie becomes close to the evil overlord – the Weasel General – yet soon sabotages his plans, helping his allies from Flower Hill. And when the Weasel Legion is defeated in episode 26, a new enemy rises: a Jackal Legion…

…The morality presented in the series is utterly black and white alike those usually in North Korean fiction. Goldie and the other Flower Hill animals are smart, noble, witty and ready to self-sacrifice. Weasels, jackals and their allies, on the other hand, are mean and treacherous cowards, longing to betray everyone they see…

…Finally, and this is perhaps the saddest part of all, “A Squirrel and a Hedgehog” is actually a cruel cartoon.

Here I am not merely talking about the Jackal General, who suffers a nervous breakdown in almost every episode. The cruelty is actually more associated with Goldie and his allies, who constantly call their enemies “bastards” and “scum,” using violence against a defeated enemy on a regular basis…

…Outside of North Korea, most cartoons and films about wars talk about a show of compassion towards the defeated enemy and civilians, in which when the hero is forced to kill, it is not an easy thing. In North Korea, however, the mentality seems to be “We are right. The enemy is not. Kill the enemy and make him suffer.” (source)

In North Korea, there is no internet, all media is state-run, and there’s only one television channel. Only one point of view is allowed to exist. From the time they start school, children in North Korea are inundated with propaganda to the point that they’re completely brainwashed. Sound familiar?

Back to Yeonmi Park’s interview

Yeonmi, now 27, escaped from North Korea with her mother when she was 13 years old. The journey was treacherous. She and her mother were sold to sex traffickers, then rescued by missionaries, they walked across the Gobi Desert to reach freedom. Eventually, they reached safe haven in South Korea. She wrote about her fight to live free in her 2015 memoir, In Order to Live.

We’ve talked here before about a Marxist agenda in the US education system and Park agrees. When she transferred to Columbia University, she says she was deeply disturbed by what she saw.

“I expected that I was paying this fortune, all this time and energy, to learn how to think. But they are forcing you to think the way they want you to think,” Park said in an interview with Fox News. “I realized, wow, this is insane. I thought America was different but I saw so many similarities to what I saw in North Korea that I started worrying.”

Yeonmi saw red flags immediately upon arriving at the school…

…It only got worse from there as Yeonmi realized that every one of her classes at the Ivy League school was infected with what she saw as anti-American propaganda, reminiscent to the sort she had grown up with. (source)

Yeonmi was baffled by what American students considered oppression.

“Because I have seen oppression, I know what it looks like,” said Yeonmi, who by the age of 13 had witnessed people drop dead of starvation right before her eyes.

“These kids keep saying how they’re oppressed, how much injustice they’ve experienced. They don’t know how hard it is to be free,” she admonished…

….”The people here are just dying to give their rights and power to the government. That is what scares me the most.” (source)

This is something we’ve witnessed to a shocking degree during the Covid pandemic, which has been used as an opportunity to change the world forever. People have given up their livelihoods, their lives, their very freedom to walk their dogs.

The United States of America was not what she expected.

Yeonmi had always dreamed of coming to the United States.

Having come to America with high hopes and expectations, Yeonmi expressed her disappointment.

“You guys have lost common sense to degree that I as a North Korean cannot even comprehend,” she said.

She thought she was going to come here and learn to think critically.

“In North Korea I literally believed that my Dear Leader [Kim Jong-un] was starving,” she recalled. “He’s the fattest guy – how can anyone believe that? And then somebody showed me a photo and said ‘Look at him, he’s the fattest guy. Other people are all thin.’ And I was like, ‘Oh my God, why did I not notice that he was fat?’ Because I never learned how to think critically.”

“That is what is happening in America,” she continued. “People see things but they’ve just completely lost the ability to think critically.” (source)

Critical thinking is indeed becoming a lost art, particularly as anyone thinking outside the status quo gets “canceled” or “defunded.” Our country is rapidly turning into the kind of place in which only one opinion can be held. To hold a different viewpoint is practically criminalized.

The worst part is that people here have chosen their path.

Yeonmi is watching America go down a totalitarian path.

Witnessing the depth of American’s ignorance up close has made Yeonmi question everything about humanity.

“North Koreans, we don’t have Internet, we don’t have access to any of these great thinkers, we don’t know anything. But here, while having everything, people choose to be brainwashed. And they deny it.” (source)

We’re seeing changes though, that take us further and further toward that kind of world. Alternative news sites are shut down in a wave of virtual book-burning. Social media purges any dissenting point of view. TikTok brainwashes young people in 15-60 second intervals. University professors promote violence against those who think differently.

Have things gone too far?

Is it fixable? Yeonmi questions where our country goes at this point.

“Where are we going from here?” she wondered. “There’s no rule of law, no morality, nothing is good or bad anymore, it’s complete chaos.”

“I guess that’s what they want, to destroy every single thing and rebuild into a Communist paradise.” (source)

There’s a playbook, we wrote it, and it’s being used to turn our once-proud nation into a parody of itself. Our very education is brainwashing students into hating our country and being ashamed of our race if we’re white. Social media inspires paroxysms of self-induced guilt over the possibility one may have accidentally micro-aggressed or not been 100% inclusive to everyone on the planet, thinking ahead of any potential handicap or mental illness that might have caused someone discomfort. Americans have become offended over practically everything and the butthurt is real. Some of it would be funny if it wasn’t so damned tragic.

Critical thinking is frowned upon, canceled, and defunded. Why?

Because we’re being set up for a communist takeover and the brainwashed masses will applaud. With jazz hands, of course, so they don’t “trigger” those who are bothered by loud noises. And definitely no memos will be sent announcing the changes using “frightening” all-caps.

Do you see the similarities between us and the most restrictive country on the planet? Do you think we’re headed that way? How do we stop it?

Daisy Luther is a coffee-swigging, globe-trotting blogger. She publishes content about current events, preparedness, and the pursuit of liberty on her website, The Organic Prepper. On her new website, The Frugalite, she shares thrifty tips and solutions to help people get a handle on their personal finances. She is widely republished across alternative media and she curates all the most important news links on her aggregate site, PreppersDailyNews.com. Daisy is the best-selling author of 5 traditionally published books and runs a small digital publishing company. You can find her on Facebook, Pinterest, Gab, MeWe, Parler, Instagram, and Twitter.