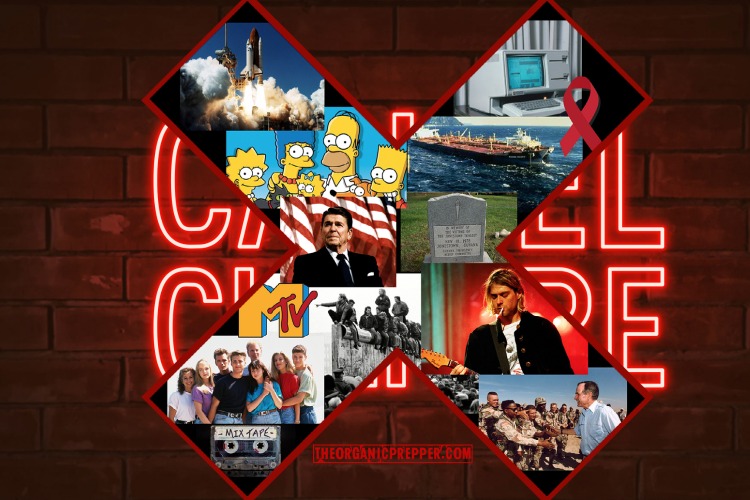 A recent article railing against “Cancel Culture” by Matthew Hennessey is a reasonably decent piece about how the vicious virtue signaling of woke leftists destroys the country and culture itself. In Hennessey’s article, he argues that Generation X is the only thing that can stop it. He offers a rallying cry to other members of his generation to stand up against the Army of the Offended to save free speech and expression.

We grew up in a country that didn’t ban books. We all agreed that witch hunts and blacklists were bad. Censorship was an outrage. The 1980s were not that long ago. Don’t act like you don’t know what I’m talking about.

So obviously we’ve got a problem here. Everybody can see it. Everybody knows where it’s heading. What we don’t have — yet — is a group of people who are willing to do something about it.

The generation that fought for its right to party should be leading the charge against these millennial Maoists terrorizing the culture via social media. Why aren’t we?

Generation X is generally defined as the demographic of people born between 1965 and 1980.

Fair enough. But, Millennials did NOT invent Cancel Culture

Hennessey’s article is worth the read, particularly if you’re a member of Generation X. However, he, unfortunately, misses the point of what’s happening and who is responsible.

Laying the blame for cancel culture at the feet of millennials is incredibly short-sighted. The millennial generation inherited an America offering service jobs instead of high-wage skilled employment, a higher education system staffed with radical Marxist activists, and an entertainment industry designed to promote the destruction of traditional American culture.

It wasn’t millennials who allowed government programs to destroy the traditional family structure and promote separation or allowed the government to shred the Constitution and initiate unprovoked foreign wars. Most of that was accomplished before millennials were old enough to read, let alone vote. As a result, most millennials are too busy working three jobs to survive while being blamed for every ill of society before or after their birth.

What is it that makes Generation X so unique?

Hennessey tries to lay it out when he writes:

I’m not saying that the 1980s were some kind of paradise. Tipper Gore launched a censorious crusade against popular music. On the list of “filthy” songs compiled by her Parents Music Resource Center was “We’re Not Gonna Take It” by Twisted Sister and “She Bop” by Cyndi Lauper. Believe me when I tell you that every teenager in America was horrified. All the cool kids protested and jeered — not at Twisted Sister and Cyndi Lauper, as they might do today if the woke mob called for it, but at Mrs. Al Gore, who was obviously sticking her nose where it didn’t belong.

What’s more, the artists who were targeted by the PMRC fought back and just about everybody agreed they were right to do so. Dee Snider didn’t apologize for having given offense and slink away like a pathetic, spineless slug. He waltzed into a Capitol Hill conference room, looked ’em straight in the eye and, in not so many words, told them to back the f–k up.

He’s right. But what he fails to mention is that “just about everybody” agrees the same today. Like in the ’80s, it is a dominant, loud minority that clamors for canceling and erasing anything they disagree with. The difference is that today, that dominant minority is winning. He’s right to point out that it’s the young people – the generation that typically wants edgy, entertaining, and racy things to be drawn to the forefront – that is now racing everyone, including each other, into the Gulags.

Hennessey should remember, Dee Snider, who rightly made Tipper Gore look like a fool, has become a facilitator of that culture unwittingly by lending credence to the claims that anyone who questions the narrative of COVID is a “COVID denier,” questions COVID restrictions is a “moron,” and supports Trump is an “idiot.”

To be fair, he’s firing the gun to have anyone canceled, but he hands the shooters ammunition. Keep in mind Snider did personally cancel Trump when he publicly declared Trump’s policies and statements so horrible that the two could no longer be friends. If only Dee found things like the bombing of Syria or the deindustrialization of his own country as abhorrent.

Snider was a rebel when depravity needed revolutionaries to push the bounds of morality to the brink. Now, when the insurgents are those questioning mass hysteria or neoliberal trade policies, he can sit back and relax in complete virtue, his signal beaming to the rest of the world.

American culture has been manipulated and transformed since the late 1800s and into the roaring twenties. That manipulation began full swing in the 1960s and every generation since. A growing indoctrination in the schools and entertainment industry has brought Americans from a culture where free speech and expression were paramount to one where words are literal violence.

In other words, out of the death of the old comes the new

JK Rowling and Margaret Atwood, creators of Harry Potter and The Handmaid’s Tale respectively, are trying to cancel “cancel culture.” They are among 150 signators in an open letter published in Harper’s Magazine.

Generation X can indeed Cancel Cancel Culture, but not by simply saying they disagree with it. They have first to understand that they are not dealing with a bunch of whiny 20 something brats who want everything their way. After all, who raised that generation? They might start asking themselves how masses of children came to see the world so much differently from their parents. Did masses of parents make a mistake at the same time? Or were there forces at play that influenced the younger generations to pursue a different course?

The truth is that these institutions – colleges, universities, public schools, the television and music industries, social media – have indeed all conspired to manipulate entire generations into the next phase of indoctrination. The generation currently allowing all things to be canceled will be assuming power in a few years. It is a generation that has been trained to see all interactions as a power struggle and all functions of society fundamentally based on power.

How do we stop cancel culture?

Many of us abhor the cancel culture we see occurring all around us. How do we stop it? Or do you think it has gone too far to be stopped? Share your thoughts in the comments.

Robert Wheeler has been quietly researching world events for two decades. After witnessing the global network of NGOs and several ‘Revolutions’ they engineered in a number of different countries, Wheeler began analyzing current events through this lens.