Professors Warned NOT TO FRIGHTEN UNIVERSITY STUDENTS By Using All-Caps 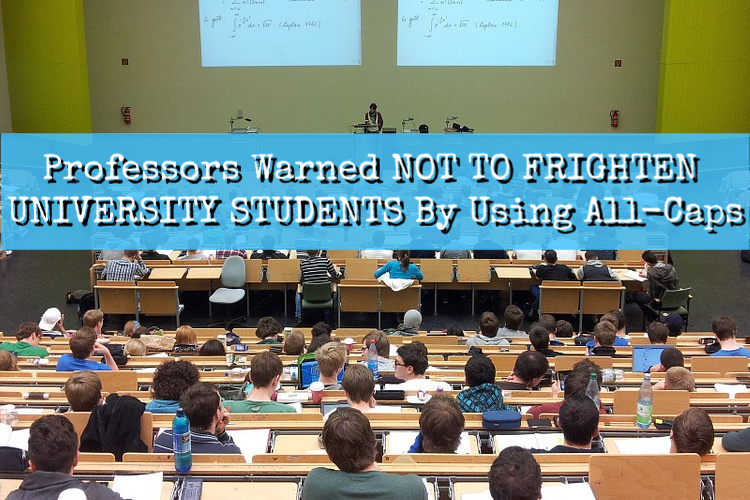 DOES THIS SCARE YOU? According to “leading research” in the UK, using all-caps in university instructions could “frighten students into failure.”

The staff at Leeds’ Trinity School was given a handful of instructions to help the future journalists of the United Kingdom succeed. Do keep in mind that these suggestions are no more outrageous than the ones here in the United States of Safe Spaces.

A few highlights of the internal document obtained by Express UK follow. (Don’t worry. The document does not contain any frightening all-caps)

Staff at Leeds Trinity’s school of journalism have also been told to “write in a helpful, warm tone, avoiding officious language and negative instructions”. Some blasted the move as “more academic mollycoddling” of the snowflake generation. An “enhancing student understanding, engagement, and achievement” memo lists dos and don’ts – with “do” and “don’t” among words frowned upon.

Course leaders say capitalising a word could emphasise “the difficulty or high-stakes nature of the task”.

The memo says: “Despite our best attempts to explain assessment tasks, any lack of clarity can generate anxiety and even discourage students from attempting the assessment at all…

And it warns that when students are unsure of an assessment, “they often talk to each other and any misconceptions or misunderstandings quickly spread throughout the group (usually aided and abetted by Facebook).

The university said the guidance was sharing “best practice from the latest teaching research”, adding: “We take pride in supporting our students to be the very best they can be. (source)

It would be difficult to be surprised by this.

We live in a world in which anything that goes against the official rhetoric of the Big Tech gods is immediately censored out.

All of this coddling comes at a high price for mental health.

The mental health of young people is truly suffering and it isn’t because of words written in all-caps.

Greg Lukianoff and Jonathan Haidt of The Atlantic wrote about harm being caused by the politcal correctness epidemic:

…it presumes an extraordinary fragility of the collegiate psyche, and therefore elevates the goal of protecting students from psychological harm. The ultimate aim, it seems, is to turn campuses into “safe spaces” where young adults are shielded from words and ideas that make some uncomfortable. And more than the last, this movement seeks to punish anyone who interferes with that aim, even accidentally. You might call this impulse vindictive protectiveness. It is creating a culture in which everyone must think twice before speaking up, lest they face charges of insensitivity, aggression, or worse…

…What are the effects of this new protectiveness on the students themselves? Does it benefit the people it is supposed to help? What exactly are students learning when they spend four years or more in a community that polices unintentional slights, places warning labels on works of classic literature, and in many other ways conveys the sense that words can be forms of violence that require strict control by campus authorities, who are expected to act as both protectors and prosecutors?

…vindictive protectiveness teaches students to think in a very different way. It prepares them poorly for professional life, which often demands intellectual engagement with people and ideas one might find uncongenial or wrong. The harm may be more immediate, too. A campus culture devoted to policing speech and punishing speakers is likely to engender patterns of thought that are surprisingly similar to those long identified by cognitive behavioral therapists as causes of depression and anxiety. The new protectiveness may be teaching students to think pathologically. (source)

And it’s so true. If you can’t withstand words you don’t like, how will you withstand the cold, hard world of the workforce? How will you deal with financial problems, divorce, or even sassy offspring?

Now imagine an SHTF event with these kids in the starring roles.

If you will, take a moment to imagine the kind of thing for which we are all preparing. Some sort of societal breakdown. Now add to the chaos these young people who have been coddled, nurtured, and inoculated with viral political correctness.

How will they possibly deal with the chaos that Selco describes in his shocking book about the reality of an SHTF environment? Will they demand their human right to food while shrouded in a weighted, anxiety-reducing blanket? Will they color while the building they are in is being shelled? How would they muster up the wherewithal to fight back and protect themselves if they’ve never dealt with even a modicum of violence in their sheltered lives?

It would be utter chaos. Bloody mayhem. They’ll be fodder for the psychopaths who are not so politically correct. It’s a terrible disservice that has been done to these young people.

If you think I’m exaggerating, please remember, I’m talking about kids who are scared of words typed in all-caps. Heaven forbid we ever face an invading force of young adults who have not been babied into incapability.