Let’s Talk About “Super-Covid” and Other Mutations 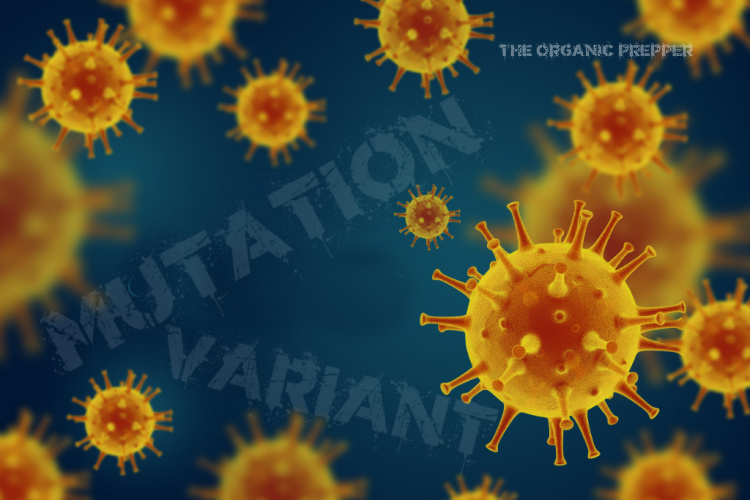 There have been a lot of scary headlines out there about new strains of Covid and even “super-Covid.” This is causing a lot of people to freak out because they’re thinking, “Holy cow, is this thing getting even worse?”

Keep in mind I am not a virologist or a medical professional. Neither are the politicians taking advantage of this crisis, the folks pimping Big Pharma drugs, or the journalists writing breathless headlines. I’m just another writer out there reading stuff and trying to figure this out, the same as everyone else.

“Mutation” is a scary word. It brings to mind every sci-fi nightmare brought to life on the big screen of some lab-born creature that gets totally out of control. It makes you think of rats so big you could saddle them and ride them. Crazy, terrifying stuff.

But viruses mutate. It’s the nature of a virus.

To survive: unlike plants, animals and other organisms, the only way a virus can reproduce is through a host cell, which it does by attaching its surface proteins to the cell’s membrane and injecting its genetic material into the cell. This genetic material, either DNA or RNA, then carries with it the instructions to the cell’s machinery to make more viruses. These new viruses then leave the cell and spread to other parts of the host organism.

But host organisms are not passive observers to this process, and over time a human’s or pig’s immune system can learn from these encounters and develop strategies to prevent reinfection. The next time the same virus comes to a host cell, it may find that it is no longer able to attach to the cell’s surface membrane. So to survive, viruses must adapt or evolve, changing its surface proteins enough to trick the host cell into allowing it to attach. (source)

So while the headlines are scary – and meant to be – it’s perfectly natural that this virus has changed.

This isn’t always a bad thing.

All mutations aren’t “bad” mutations. The fact that a virus mutates doesn’t mean that the virus is “worse.” I know when a virus mutates in a movie or book, it’s always the bane of humanity but in reality a mutation isn’t always a bad thing.

What about this Super-Covid business?

Again – it’s a mutation – a change, but not necessarily more deadly.

A preliminary study published May 5 at bioRxiv.org, for instance, found a mutation in the SARS-CoV-2 spike, a protein on the outside of the coronavirus that allows it to break into cells. This new variant is now found more often in places like Europe and the United States than the original form of the coronavirus. That may mean the change makes the virus more transmissible, the authors concluded. But the study lacked laboratory experiments to support the claim.

Other explanations could also explain the pattern. The SARS-CoV-2 variant with the mutation could have ended up in certain regions thanks to random chance — a person infected with a virus that had the new mutation just happened to hop on a plane — and might have nothing to do with the virus itself. The study didn’t provide enough evidence to distinguish among the possibilities.

“What I think has been potentially confusing to people is that we’re watching this very normal process of [viral] transmission and mutation happen in real time,” says Louise Moncla, an evolutionary epidemiologist at the Fred Hutchinson Cancer Research Center in Seattle. “And there’s this real desire to understand whether these mutations have any functional difference.” (source)

The new strain that the media has nicknamed “Super Covid” may not be as scary as it sounds. What researchers have discovered so far is that it’s more contagious than the former less-than-super Covid – although they’re not absolutely positive this is true. (Emphasis mine)

After initial caution last week, scientists are becoming more convinced that the VUI-202012/01 variant of coronavirus is more transmissible. On Monday, experts from the U.K.’s New and Emerging Respiratory Virus Threats Advisory Group (NERVTAG) told journalists that the group now has “high confidence” that the strain has a transmission advantage compared with other variants. This compares with the “moderate confidence” that the committee said it had in a meeting on Dec. 18.

That might seem obvious given how quickly the strain appears to be spreading, but it can be hard to exclude other explanations such as a super-spreader event giving the variant a boost — particularly since scientists don’t know what might be making the viral strain more infectious. However, scientists from NERVTAG said that looking at the genetic data of the virus alongside the epidemiological situation had convinced them of its higher rate of transmission. They noted that the strain was able to keep spreading during the November lockdown in England, even while rates of infections for non-variant coronavirus fell. (source)

The new variant was first discovered in the UK, so more research on it has been done there than anywhere else. According to UK Minister of Health Matt Hancock, there’s no evidence to suggest this mutation is deadlier than the one with which we’ve been dealing.

Addressing the House of Commons, Hancock said scientists had pinpointed more than a thousand cases involving the new variant that “may be associated with the faster spread” in regions including London.

“There is currently nothing to suggest that this variant is more likely to cause serious disease and the latest clinical advice is that it is highly unlikely that this mutation would fail to respond to a vaccine,” he told MPs. (source)

It’s even possible that the higher transmissibility could be a positive thing. Sometimes mutations like this make the disease less virulent and if that were the case – we don’t know if it is or not – then we’d be closer to seeing the virus burn out naturally as more people develop T-cell immunity from having had the virus (or having been exposed and fought it off.)

Having a robust cellular immunity for at least for six months after even mild or asymptomatic SARS-CoV-2 infection, is good news.

“This data is reassuring,” lead study author Paul Moss, from the University of Birmingham, told a Science Media Centre briefing. As in any other study, further research is recommended to show whether or not such level of immunity can fight off re-infection, or how long the protection lasts. “We need to have much larger population studies to show that,” Moss told journalists. (source)

This is how a virus “burns out.”

There’s a lot we don’t know.

I’ve had Covid (even though 50% of the comments on my article about it said I didn’t) and it was a miserable experience. Bloodwork afterward showed I have antibodies against the virus for now, which provides me with some natural protection – for how long, nobody seems to know.

From a preparedness standpoint, there’s nothing you need to be doing differently now than you were doing before. Remember that there are all sorts of knock-on effects (personal economy, mental health, supply chain issues, medical freedom) we should be preparing for and the emergence of new strains has not changed any of that.

Focus on what you can control, not on media-driven hysteria.

The new strain is something with a lot of unknowns, but the few things we currently do know point to it not being a major escalation of our situation. If more people get it and get a milder case, then it stands to reason that more people will have some natural immunity.

Again – we don’t know this for sure – but don’t let the headlines about “super-covid” and mutations freak you out. Nobody really knows if this will be worse, and the current evidence isn’t pointing to anything apocalyptic.

Please share your thoughts about this in the comments. Do you think the new strain is something to worry about? Or do you think it’s being overblown?