Whatever the Outcome of the Election, We CAN Revolt Against the Politicians and the Media and the String-Pullers by UNITING 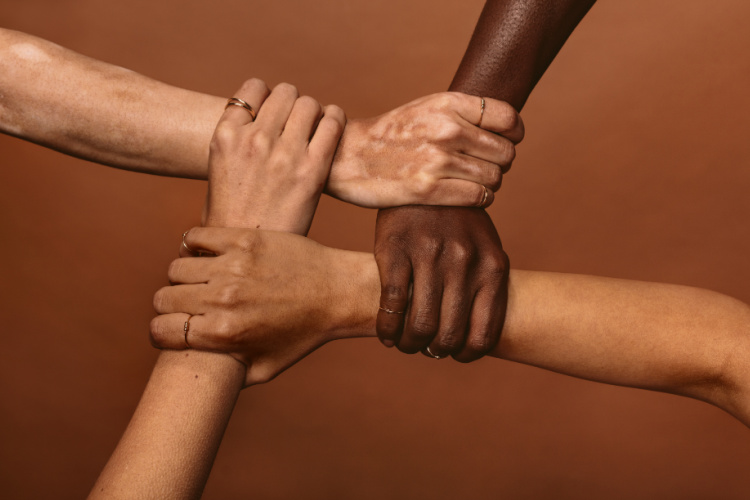 We’re living in a nation divided. You need only look at social media or the comments section of nearly any website to see the rage and animosity between people who hold opposing opinions. Violence has broken out in the streets of many of our cities and it’s all the media really wants to talk about.

Some people will call me naive, but I still believe in unity, the goodness of people, and the possibility of peace.

I’m writing this piece before the election. I have no idea how it’s going to turn out. This is my opinion regardless of which candidate is declared the winner and it is not based on politics. It’s based on my belief that Americans can still unite if we choose to do so.

People are giving politicians control over their relationships.

What I don’t understand is how people can allow politicians – people who are in it for power, not for you and me – to divide them from the people they once loved. How can you look at your son, daughter, parent, cousin, or friend and say, “You voted for X and therefore I no longer love you?” How can you put this politician and what he or she stands for ahead of your own people?

Do you think those politicians care about you enough to divide their own families? To disinvite someone to Christmas dinner? To “unfriend” somebody on social media and in real life? Of course not. All they want is your vote. They want your verbal support. They don’t give a tinker’s damn whether or not your family is destroyed because of them and their causes.

And yet, I see it all the time. I saw a woman proudly declaring she got her dying father to go vote against a candidate as if that was the most important way to spend her last few days with a loved one. It made me sick. When my father was dying, all I wanted was to hear his voice, hold his hand, listen to his stories, and tell him my own. He told me a dozen times on his last day, “You know I love you, right?”And I replied, “Yes, I know because you showed me every single day. I love you too.” Politics was the last thing on my mind. It would be the last thing on any rational human being’s mind at a time like that.

This is not a unique case, either. Families are fractured forever for people who don’t even know who they are, and people feel good about it.

There are still people who have their humanity.

There are still plenty of Americans who are in full possession of their humanity. They’ll feed a hungry person without asking where that person stands on Joe Biden. They’ll help a lost child at Walmart get reunited with her mother without wondering whether Mom is a Trump voter. They’ll help a person in a wheelchair get something off a high shelf at the store, and they’ll check on their elderly neighbor, all with no questions asked.

The United States of America is full of people like this. But they don’t make the headlines.

Nobody cares about small acts of service and kindness. They only want to see Molotov cocktails thrown through the windows of rich peoples’ homes or brutal crackdowns on rioters. That’s the hunger our media is feeding. That’s what people believe the real USA is all about right now. My friends outside the US are under the impression that the entire country is burning and we’re living through a 3-D movie-level apocalypse.

But it’s not like that everywhere. My 20-year-old daughter lives in an apartment building where her best friend is a 61-year-old lady. They have coffee together every day. They take walks weather and safety permitting. They don’t discuss politics – they discuss plants and the little patio gardens both of them are growing. They discuss their day and their family and the little odds and ends of life.

I’m friends with a group of women in which we have many widely different beliefs, both religious and political. We are a tight-knit group and we can discuss anything – including politics and religion – without hard feelings and then get right back to a conversation on home security or food preservation. That’s because we put our humanity and our similarities first, not some politicians that – I repeat – do not care about us personally.

This isn’t some utopian fantasy.

Before the advent of social media and an incredibly biased press, nobody used to throw the Thanksgiving turkey in the trash when they discovered they were hosting a table full of *insert other political party here* because that wasn’t made the center of our universe. Our children didn’t come home ready to snitch on us for having guns because they were indoctrinated at school that guns were bad, Marxism was good, and anyone who thought differently deserved at best scorn, and at worst legal punishment.

Dial things back 30 years or so and the country was not like this.

But the level to which this beautiful idealism has been perverted and used to further a dark agenda is itself criminal. The reason we have so many young people prepared to wreak violence and destruction in the name of their ideals is that they’ve been deeply manipulated. They’ve been manipulated by the school curriculum, by the teachers, by the professors at universities, by the media, and by social media – all of these purport things to be just and true with only a portion of the real story given. They play on empathy and forsake logic in order to activate young visionaries and to radicalize them. That’s right – these kids from good families who are out there behaving violently have been radicalized just as certainly as any child raised to be a Jihadist.

The solution lies with us.

I know I’m just an idealistic, middle-aged hippie chick, and that doesn’t always mesh with some of the most vocal parts of the prepper crowd. I know that I don’t have a tactical background or a bad-ass gun collection. I’m unlikely to lead anybody into battle.

But I have some strong beliefs about a different type of revolution. We can revolt against the media and the politicians and the string pullers by uniting.

Fixing this mess that our country is in starts small. It starts with families, neighbors, and communities. What YOU do matters. How YOU respond to the results of the election matters. How YOU react to those with whom you disagree matters.

Please understand that I’m not suggesting we don’t defend ourselves or that we allow others to ride roughshod over our safety and property rights. Not at all. We are all born with those inherent rights and I, like you, will do whatever I must to defend my loved ones.

Whoever is named the next president of the United States will play political games that are far above our pay grades. There are things you can control and things you cannot. If you’ve gone out and cast your vote, or if you’ve withheld your vote because you don’t stand behind either of the candidates, then you’ve done what you feel is right for the big circle. The rest of it is out of our hands.

Turn off the “news” and connect with the people around you. Look at your similarities, not your differences. Steer the conversation there when it goes astray and into controversial topics. Cement your friendships.

I hope that we can collectively take a deep breath and focus on our small circles. Because as things get worse in our country in terms of the economy, supply chain issues, and the unrest that is almost certain to occur, all we can do is focus our positive efforts on those closest to us.

This essay about how we can do better this election probably won’t be as widely spread as if I’d written something gloomy and terrifying, but I believe that all of our quiet voices calling for peace are important. Maybe share it with your friends if you, like me, want to see peace.

Let’s talk about common ground and our similarities. Not about politicians. How can we help keep Election Day peaceful in our necks of the woods?

I wish you all safety, kindness, and peace.