Why Do All These Food Facilities Keep Catching Fire? 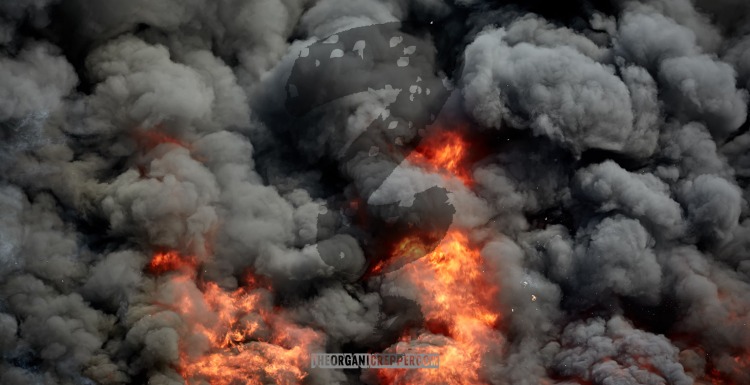 Fire seems to be the buzzword of the day as America continues to witness fire after fire within its food production facilities. This comes right on the heels of a ban on the exportation of Russian fertilizer, numerous fertilizer plant fires within America, and a chicken problem we’re facing in the US.

But fire? Why do they keep popping up within American food infrastructure? What are we seeing there?

(To the best of our ability, these dates are accurate. They may be within 1-2 days of the actual event due to differences in reporting.)

February 3 – In Clovis, New Mexico, the Gavilon Grain Elevator suffered an explosion. While it was said that the “cause of the fire at this time is unknown and will be under investigation,” it is thought that this was caused by grain dust accumulating in a part of the welding of some ductwork and catching fire.

February 4 – A fire decimated a portion of Wisconsin River Meats, a plant that specializes in sausages. It was later said that “the old portion of the plant is a total loss.”

Wisconsin River Meats lost all of their processing equipment in a fire on Thursday: pic.twitter.com/nP67KAURTQ

February 18 – In Claypool, Indiana, the Louis Dreyfus Co. soy processing and biodiesel plant caught fire. There was no known cause of the fire at the time.

As of 8:45 Tuesday evening, 9 fire departments and over 50 fire trucks were on site at Louis Dreyfus Company in Claypool, Indiana. HAT will continue to monitor this developing story and provide updates as more details emerge via https://t.co/U9KtD3i4e4.https://t.co/xdpgDdN5zD pic.twitter.com/4haB0VERa0

February 22 – The Shearer’s Foods potato chip plant in Hermiston, Oregon, caught fire after a portable boiler fueled by natural gas exploded. As of February 25, there were fears that the plant could be shut down permanently. This plant supplied much of the West Coast with potato chip products, was Shearer’s only operation on the West Coast, and the fire caused the nearby Union Pacific railroad to be forced to shut down for a number of hours.

March 15 – Pilgrim’s Pride – a chicken processing facility – was shut down after a dangerous ammonia leak was detected. This apparently isn’t the first time this particular facility has had problems with ammonia gas leaks, however.

March 16 – The Hot Pockets production line at a Nestle facility in Jonesboro, Arkansas, experienced a fire (somebody must’ve bitten into one). It’s reported that a production line cooler caught fire in an area that wasn’t easily accessible.

March 17 – The Conagra Grocery Products plant in Waterloo, Iowa, had a section of its conveying equipment catch fire. The fire was contained.

(Probably a good idea to start putting some extra food away, don’t you think? Check out our free QUICKSTART Guide to building a 3-layer food storage plan for advice.)

March 23 – The main Pepsi Co. distribution center in the Tri-State Area (the plant was in New Jersey) caught fire. The fire was caused externally, and nobody knows why it started, but there are reportedly no signs of arson.

According to local mayor Brian C. Wahler, “Let’s put it this way, if you see Mountain Dew on the shelf, my advice is buy it now. Because until the PepsiCo facility is able to redistribute nationally, this facility won’t be operational for a while because of smoke damage on the inside.”

April 8 – Milk Specialties Global in Fond Du Lac, Wisconsin, suffered a chlorine gas leak after chemicals were mixed that caused nearby railway traffic to be stopped for several hours. (Okay, not a fire, but still worth noting.)

April 11 – The Western Sugar Cooperative in Scottsbluff, Nebraska, suffered a turbine-caused fire. There are differing reports on whether it was started by an explosion or not. According to one of the executives of the company, however, “It was not an explosion, but a small fire that was extinguished quickly.”

It was also said that “quite a bit of damage” was caused, and the cause of the fire is still being investigated.

Thoughts and prayers go out in NH https://t.co/1XQ4GL7PXw

April 14 – The Ainsworth Pet Nutrition facility in Vernon Township, Pennsylvania, caught fire after product clogged a section of steel pipes attached to the milling equipment and started a fire.

April 14 – Taylor Farms, a Salina, California food processing plant, caught fire. Over 35,000 people within the surrounding area (a key agricultural region of California) were ordered to shelter in their homes as there were fears that a deadly ammonia cloud could be released by the fire.

April 20 – In Leoti, Kansas, a fertilizer plant caught fire. There’s not a lot of detail out on this as of yet.

What’s the deal with all these fires?

America is a big nation. Are these just typical events that we’re now hyper-focusing on? You find what you’re looking for, after all. But with everything going on at the moment – with all the warnings of a global famine on the way and the constant threat of America conventionally entering World War 3 – this all seems as if something apparent is going on.

What are your thoughts on the matter? Is this just business as usual, or is there something more afoot (for at least some of these)? Let us know what you’re thinking in the comments below.