If You Can’t Defuse Heated Situations, You Won’t Make It. 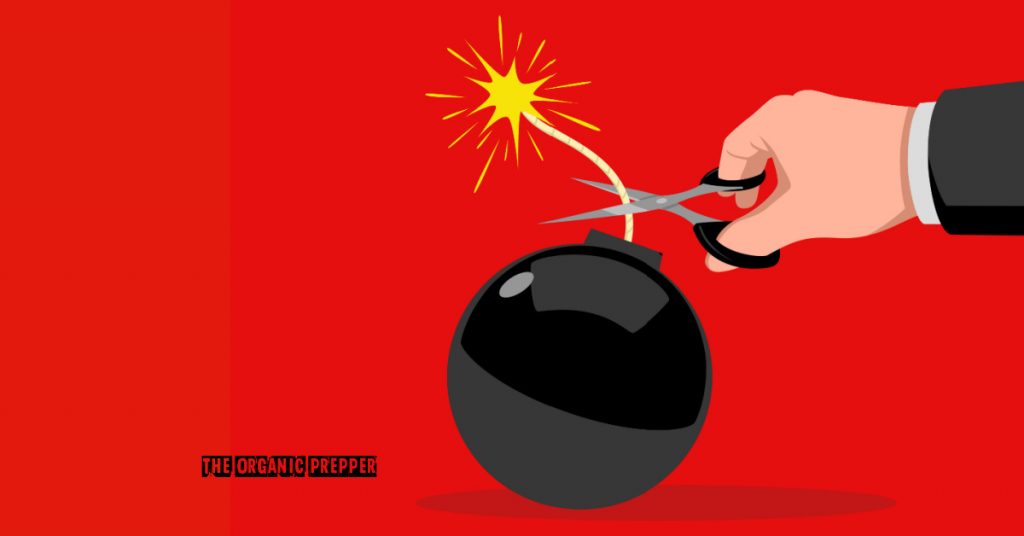 By the author of What School Should Have Taught You and The Faithful Prepper.

There’s a lot of talk within the Preppersphere about how you’re to interact with other people who are “outsiders” in a collapse type of environment. It’s the Golden Horde discussion. I want to give a bit of my two cents on some of that, particularly when it comes to diffusing heated situations. And let’s put off some of the big ticket items like an EMP or nuclear war this time and instead think about a hurricane, two-week power outage, dam rupture, or something of the like.

Let’s say one of those types of situations has happened – some type of massive natural disaster – and it has led to there being a lot of angry, hungry, desperate people around you. I don’t think this is too hard to imagine.

I don’t know if you remember this or not, but there’s a scene in James Wesley Rawles’ Patriots where two groups of people are meeting each other under these types of circumstances. Neither group knows anything about the other, they’ve both been through a lot, and neither really has much reason to trust the other.

I think this is a perfect example of what people see in disaster situations.

Consider being trapped on the interstate overnight during winter conditions. Rachel detailed how people began to get out and talk with each other. They were hungry, cold, scared, and desperate. When you combine all of this together, you have a powder keg that’s ready to explode.

People already get into fist fights on Black Friday (traditionally) because of a shortage of TVs. How will things be when there’s a shortage of food?

Because of all this, I think that one of the best things you can do is to understand a thing or two about how to resolve conflict and defuse heated situations.

I can remember once watching an older friend of mine defuse what was about to become a fist fight between two other friends when I was younger. That, I think, was the defining moment when I realized, “Wow, you can actually use words to make tense situations better.”

It’s not only a vital skill in daily life, but it’s most certainly one when you’re living in an area that’s getting pummeled by looters, is filled with hungry kids and scared dads, and where there’s a lot of pent-up anger.

One of the best resources I’ve found that I think could help the prepper in this regard is a book called Crucial Conversations: Tools for Talking When Stakes Are High.

While it doesn’t sound as cool of a book as Lights Out, Nuclear War Survival Skills, or the essential  Zombie Choices, I would argue that the lessons that are contained within Crucial Conversations would easily prove to be some of the best information you could have for navigating a world filled with angry humans.

(Want to learn about the four stages of disaster? Check out our free QUICKSTART Guide.)

Think about this: have you ever unintentionally done something to somebody that made them mad and they responded by escalation? You appeared to have too many items in your cart for the fast checkout lane, and so the lady behind you decided this was a fine time to loudly question your character. You tried to complement your coworker and they burst into hysterics. You honked your horn at somebody who was sitting at a green light and then they got out of their car. Did you ever get into a verbal (or more) fight with somebody since 2020 while out in a store?

The point I’m trying to drive home here is that there are a lot of people out there who have a lot in common with a territorial dog without a fence: they’re quick to bite and soon make things worse for all involved parties.

Admittedly, there are a lot of evil and crazy people out there too.

An older relative of mine had a complete stranger walk into his secluded business office, shove him down onto the ground, and kept shoving him down every time he tried to get up because he “didn’t wear a mask.”

You’re not going to talk your way out of an altercation with a guy like that. Some confrontations and their consequences cannot be avoided.

While there are evil and crazy people out there, there are also a lot of stupid people.

These people ultimately want the same thing that you do, but they’re too dumb to see it. If you have teenage kids, you likely understand what I’m talking about.

You want them to be happy, and they want to be happy, but their pride and ignorance are in the way of their actually realizing that. And so, you both end up in a yelling match over something trivial.

A guy who wants to feed his hungry kids back at home wants to end up there in one piece. He doesn’t want to be injured, arrested, or worse. But in the heat of the moment, when he’s trying to cut in front of you at the barter fair (I think that’s what Rawles called it, right?) line, he forgets that it may be possible to get his food for his kids and get home in one piece. He maneuvers into thinking it’s a one-lane highway when it’s actually not. He ticks off a man three times his size, calls him a name, and ends up pummeled and laying unconscious on the floor.

You have to know how to navigate with others.

May I add as well, that it’s repeatedly stressed that no man is an island. The “lone wolf” dies. You need other people. If that indeed is the case (and it is), then isn’t it worth learning the skills to keep all of your people that are in your little hamlet from wanting to part ways because of an argument that started over farm chores?

After 2020, I came across a lot of stories of people who had their family life torn apart because all of the stress of the lockdowns and all that entailed proved to be too much. Confined circumstances, economic loss, human dignity trampled – it all proved to be too much for many, and their homes dissolved in the process.

Now, think about life in confined circumstances after a hurricane, flood, or what have you. Are we to magically believe that those circumstances would magically give us the skills to defuse heated conversations? Or, instead, would we find that this was an area where we could have prepped, but didn’t?

Crucial Conversations will help you to learn how to defuse potentially explosive situations.

Even if you think to yourself, as I did, “Why on earth do I need to learn how to hold a conversation? I’ve been doing it my whole life,” I can assure you that you’ll still learns something from this book that could very easily end up saving your life.

I realize it’s something of a bizarre prep/skill to talk about, and the only instance I can really think of where anybody has covered it is in Patriots, but it is worth talking about.

What are your thoughts? Is de-escalation a skill you’ve worked on? Do you have any tips for the rest of us? Let’s discuss it in the comments. 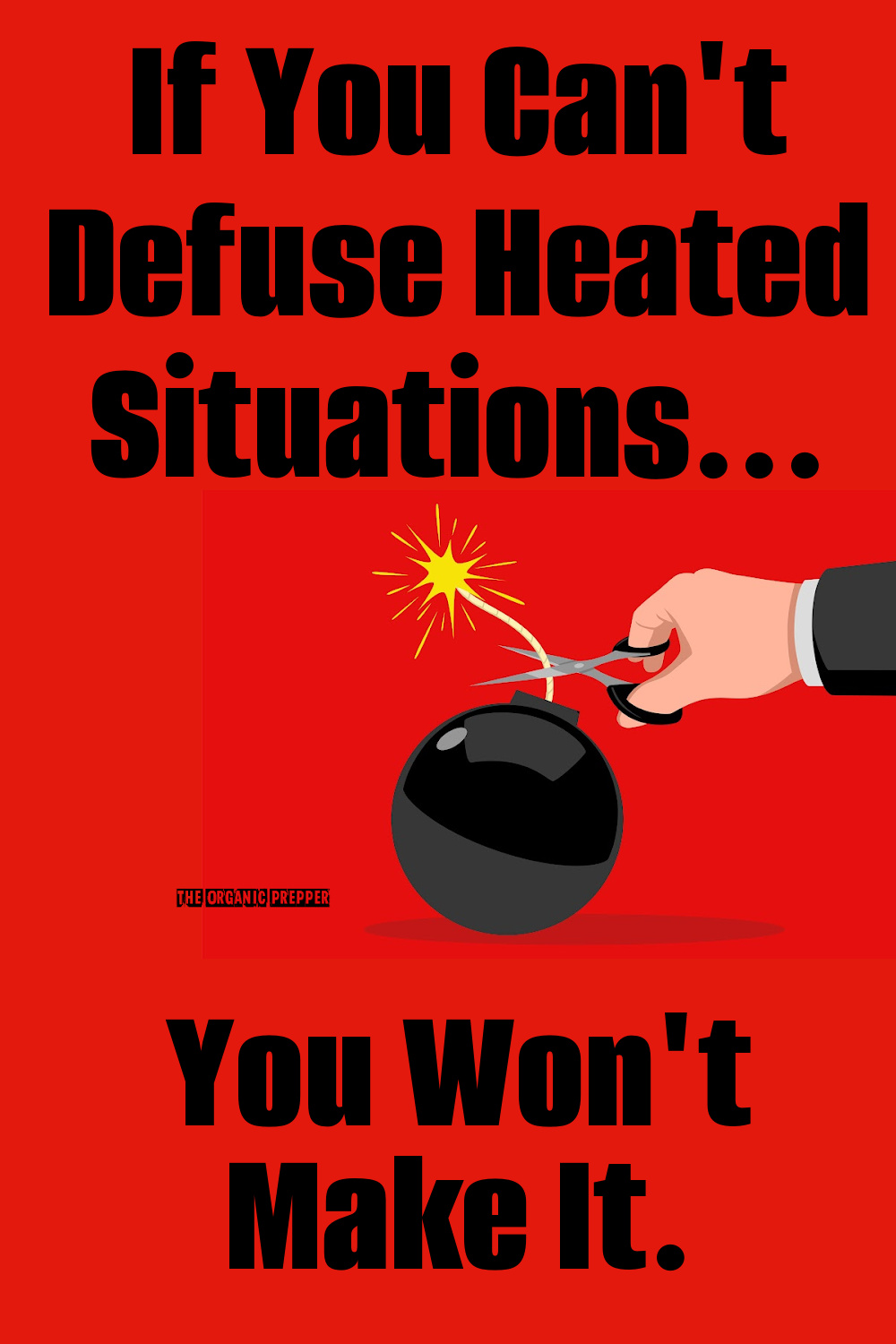