Shocking Video Simulation Shows the Devastation Nuclear War Would Cause 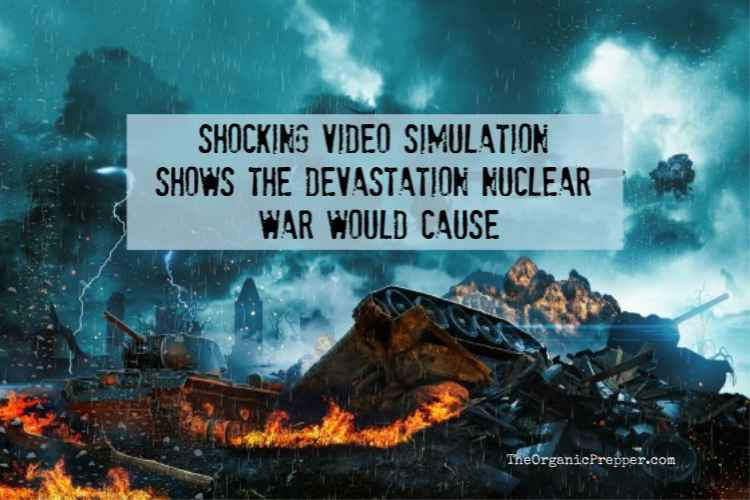 The United States and Russia have quite the bumpy relationship. Talk of war between the two powerful countries isn’t anything new, and anyone who is paying attention knows that such a war would be devastating for much of the world.

Two recent research projects show just how bad things would be if the US and Russia unleashed their nuclear arsenals on each other.

A war between the US and Russia would cause a global nuclear winter.

Several months ago, researchers from Rutgers University, the University of Colorado Boulder, and the National Center for Atmospheric Research ran a simulation to see what a nuclear war between the US and Russia would do, and the findings were not pretty: Such a war would plunge the planet into a nuclear winter, with clouds of soot and smoke covering the planet. The study, published in the Journal of Geophysical Research: Atmospheres, found that the nuclear detonations would inject about 147 million tons of soot into the atmosphere. That soot would then spread around the stratosphere, blanketing the Earth in darkness.

Not only would explosions, fires, and radiation exposure kill millions in targeted cities, but the resulting nuclear winter – which could last many years- would drastically alter the Earth’s climate. The growing season would be slashed by nearly 90 percent in some areas, and death by famine would threaten nearly all of the Earth’s 7.7 billion people.

According to the model, the soot would not visibly clear for around seven years. Temperatures would drop by an average of 9 degrees Celsius (16 degrees Fahrenheit) across the globe, the researchers wrote, and it would take around three years for surface light to return to 40 percent of its pre-attack level.

Researchers at Princeton University created a simulation to see just how bad a nuclear war between the US and Russia would be for humanity, and the picture they paint is terrifying. The team used the Pentagon’s own plans (which were recently leaked) to “highlight the potentially catastrophic consequences of current US and Russian nuclear war plans,” a press release states.

The risk of nuclear war has increased dramatically in the past two years as the United States and Russia have abandoned long-standing nuclear arms control treaties, started to develop new kinds of nuclear weapons and expanded the circumstances in which they might use nuclear weapons. (source)

Researchers at Princeton’s Science and Global Security Lab created this video, which shows just how widespread the devastation from a nuclear war would be.

Does that simulation remind anyone else of the 1983 movie War Games? In that film, a young hacker accidentally accesses a US military supercomputer system called War Operation Plan Response (WOPR). Believing it is a video game, the hacker gets WOPR to run a nuclear war simulation – and the computer nearly starts World War III.

At the end of the movie, the computer tells Professor Falken, who is attempting to stop the WOPR from launching war, that nuclear war is “a strange game” in which “the only winning move is not to play.”

How many nuclear weapons are there?

Nine countries together possess nearly 14,000 nuclear weapons. The US and Russia have the most (6185 and 6500, respectively).

According to ICAN, “The United States and Russia maintain roughly 1,800 of their nuclear weapons on high-alert status – ready to be launched within minutes of a warning. Most are many times more powerful than the atomic bombs dropped on Japan in 1945.”

If all of the nuclear weapons in the world were detonated at once, what would happen? The YouTube channel Kurzgesagt – In a Nutshell attempts to demonstrate the aftermath in this video.

Is nuclear war between the US and Russia inevitable?

Such a war would be suicide for both countries, so why either would resort to such a thing baffles the mind. Earlier today, CNBC reported that Russia is conducting massive military drills with China, India, and Pakistan, in what experts say could be Moscow “sending a powerful message to the West.” Some sources report that tensions between the US and Russia are escalating to “new Cold War” levels. Others believe that the ousting of war hawk John Bolton might be a sign of the potential for a Russia-China-US alliance.

Do you think nuclear war is inevitable, or that it will never happen? What do you think of these simulations? Are they likely accurate, or are they fearmongering? Please share your thoughts in the comments.