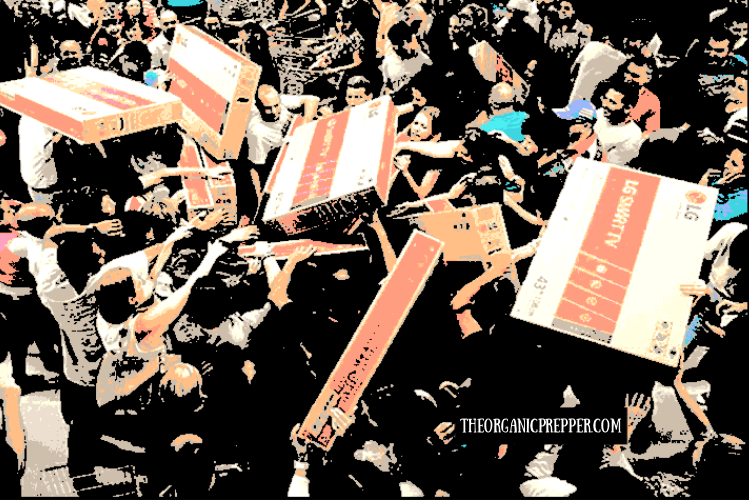 by Daisy and Dagny

American shoppers continued to embarrass themselves in the eyes of the world during this year’s shopping extravaganza. While smart shoppers stayed home and avoided the insanity by ordering gifts online, the melees were alive and well in malls and big-box stores across the country.

As people battled it out for the best-priced bath towels, preppers should take a quick moment to ponder how these same folks would behave if they were hungry. (You might want to review this article, Why Prepper’s Need Guns.)

Black Friday violence is so common that there is at least one website dedicated to tracking deaths and injuries associated with shopping on that day. Take a look here:  Black Friday Death Count

Here are some of our previous Black Friday Video Hall of Shame posts.

WARNING: In the videos below, there is violence, harsh language, and all-around bad behavior. Don’t click on the videos then blow up our email complaining that someone was cussing on the website.

My (Daisy’s) daughter worked at Target at opening time and I said, “For the love of cats, please stay away from the door!” She said that at her particular store in Virginia it was chaotic but not violent.

This cannot be said for some of the shoppers in our first clip. We’ll start off with a motivational speech to Target employees and watch the situation devolve from there.

This Twitter user went to an undisclosed Walmart and took selfies with fights breaking out behind him.

The folks 3 and a half minutes in literally took down the doors to stampede into the store. Don’t think your flimsy hollow core apartment door will do the trick if things get bad.

This crowd was light-hearted, almost festive. Until the doors opened. And then it was GAME. ON.

And we have action #BlackFriday https://t.co/WRNREebVdR

Speaking of what people will do for food..,

Five seconds into the clip below you can hear someone scream like she’s in mortal terror. 17 seconds in, there’s a narrowly averted throw-down.

Watch these guys egg on the two women fighting over a vacuum – right beside a huge display of identical vacuums. As you get further into this video, some of the clips look like they may have come from previous years.

Four cops and a taser couldn’t take this guy down.

You’re going to love the narrator of this video, apparently shot in Charlotte, North Carolina.

One Minute #BREAKDOWN: MAYHEM on #BlackFriday!!

Gina vs Trish. This is how we #BINK in #NorthCarolina.

We’re not sure if this should console us or not, but it’s not just in the United States, either. Let’s just say that in South Africa, Black Friday shoppers do NOT mess around.

The moral of the story, this and every Black Friday, is to never underestimate the capacity of people to lose their dang minds and act uncivilized, and even become violent. And always know that one day, when people are hungry but you are prepared, you might find yourself feeling like a Walmart on Black Friday.