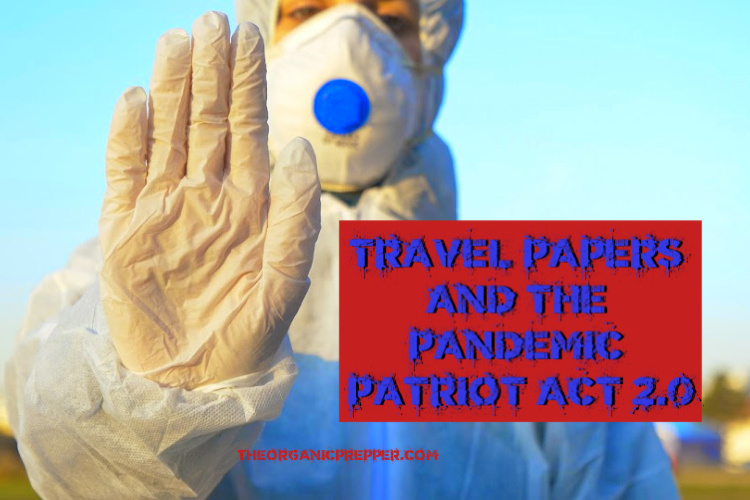 Did you ever think we’d reach the point in the United States where you had to have papers to freely travel from one place to another? It appears we’re at the point.

The MTA issued “travel papers” to their workers

On March 17th, a few days before New York issued a shelter in place order, the Metropolitan Transportation Authority issued “travel papers” to their employees to prepare for a potential coronavirus curfew. The NY Daily News reports:

If non-emergency travel is restricted, workers can show law enforcement officials the letter if they’re stopped on the way to work.

“This letter along with current New York CIty Transit identification identifies this individual as an essential employee who is required to travel during the curfew imposed due to the Coronavirus emergency,” states the letter, which is signed by the Metropolitan Transportation Authority’s Police Department’s acting chief Joseph McGrann. “Please give this individual due consideration during this crisis.”

MTA spokeswoman Abbey Collins said the letter was distributed on Monday to a “limited number of NYCT bus employees living in New Jersey” because the state’s Gov. Murphy suggested imposing a statewide curfew between 8 p.m. and 5 a.m. (source)

Clearly, the wheels have been in motion for several days. And it’s not just the MTA.

For everyone who thought the article about the Lockdown of America was a “hysterical overstatement” and that they could still do whatever they wanted because it wasn’t really being enforced, what are you thinking now that “travel papers” are being handed out? To me, this sounds like the lockdowns I wrote of yesterday were just the first incremental step toward a society that nobody hopes to see.

Yesterday, readers sent me photos of “travel papers” provided to them by employers so they could get to and from work. These are employees who work in industries like healthcare, pharmacies, and foodservice, as well as those who work in the production, transport, and sales of essential supplies.

One reader wrote, “We were told to show these if we got stopped on the way to or from work and that if the authorities gave us any trouble, to not argue and just go back home.”

Here are some of the papers that people sent. Identifying information has been redacted. 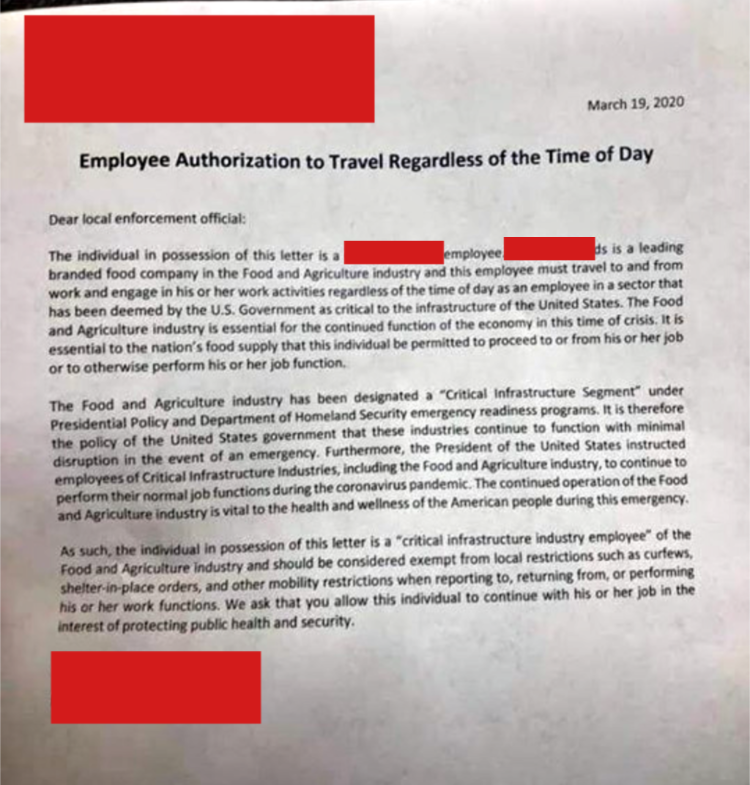 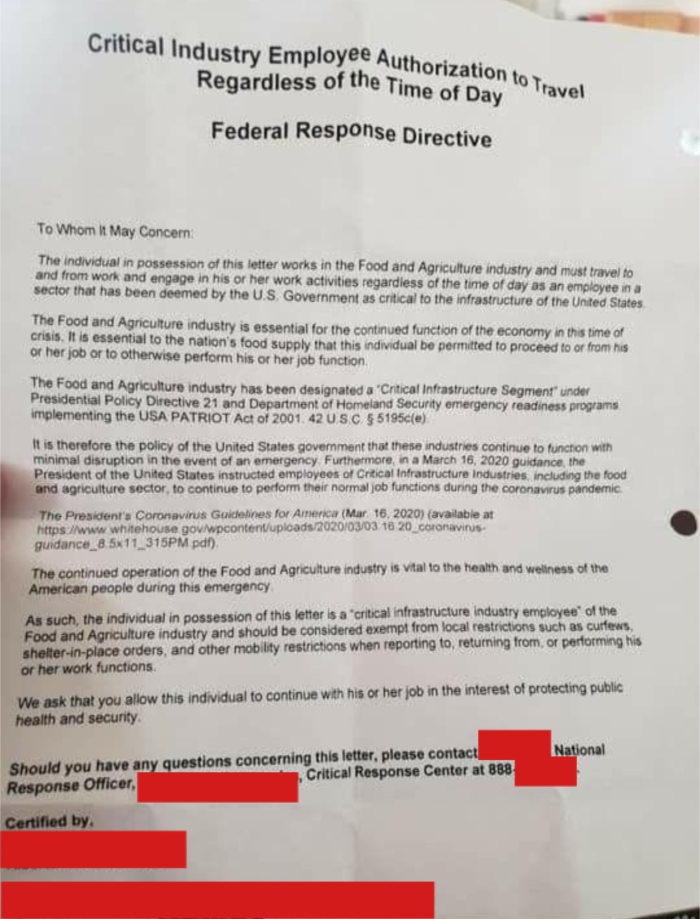 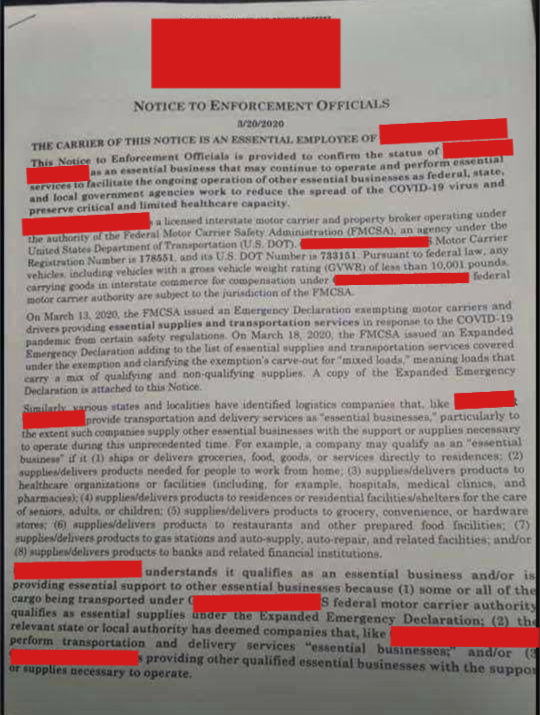 Most people were given their papers on Friday or Saturday and told they’d need them to get to and from work starting the week ahead.

I wonder who’s going to be checking your “travel papers.”  Will it be the local PD? The National Guard? The military? Maybe it’ll be all those TSA agents who are currently out of work but already accustomed to molesting innocent travelers.

What does this mean for those told they’d be able to go to the store?

We’ve been repeatedly told during task force press conferences that nobody needs to worry about buying extra supplies because the stores will remain open. We were chastised about stocking up and “hoarding” supplies. But if you need travel papers just to get to work, how will a person get to the store when they need to pick up some groceries? Will these papers only be required during certain hours?

It’s easy to prove you just went to the store when you have a bag of groceries in hand, but how do you prove you are going to the store? Will they just begin distributing the food to us as opposed to allowing people to shop for their own food?

A little clarity and less subterfuge would go a lot further toward preventing concern that we’re about to go full Wuhan here in America.

If I didn’t have supplies already, I would head to the store today and get enough for a couple of extra weeks at the very least. Here are some ideas for finding supplies amidst the picked-over inventory that remains.

So, what happens if you get caught without your papers? I’m glad you asked.

It seems like the DoJ is itching to suspend the Constitution.

At this point, the “Department of Justice” sounds like one of those other phrases the government uses to mean the complete opposite. Like the “Patriot Act” which is as far from patriotic as it gets.

And speaking of the Patriot Act, the government is now introducing what I’d like to dub the Pandemic Patriot Act 2.0.

The DoJ has secretly asked Congress to draft legislation allowing them to indefinitely detain people without due process during the coronavirus pandemic. Because who doesn’t want to add a little spice to our economic crisis with the added threat of indefinite detention?

Documents reviewed by POLITICO detail the department’s requests to lawmakers on a host of topics, including the statute of limitations, asylum and the way court hearings are conducted. POLITICO also reviewed and previously reported on documents seeking the authority to extend deadlines on merger reviews and prosecutions…

…In one of the documents, the department proposed that Congress grant the attorney general power to ask the chief judge of any district court to pause court proceedings “whenever the district court is fully or partially closed by virtue of any natural disaster, civil disobedience, or other emergency situation.”

The proposal would also grant those top judges broad authority to pause court proceedings during emergencies. It would apply to “any statutes or rules of procedure otherwise affecting pre-arrest, post-arrest, pre-trial, trial, and post-trial procedures in criminal and juvenile proceedings and all civil process and proceedings,” according to draft legislative language the department shared with Congress. In making the case for the change, the DOJ document wrote that individual judges can currently pause proceedings during emergencies, but that their proposal would make sure all judges in any particular district could handle emergencies “in a consistent manner.” (source)

What the heck are “pre-arrest” procedures, anyway? Is that the part where government investigators go and set someone up to commit a crime like all those “bombing plots” the FBI keeps saving us from?

I wouldn’t be surprised to see another 300-page legislation like the original Patriot Act that was rolled out just weeks after 911, giving us the TSA, indefinite detention, and all sorts of other dystopian nonsense.

In the infamous words of Rahm Emmanuel, the former mayor of Chicago, “You never let a serious crisis go to waste. And what I mean by that it’s an opportunity to do things you think you could not do before.”

It looks like the government is taking those words to heart with travel papers and new draconian laws.

Since I wrote the article about America locking down yesterday, more states have joined in. Now New York, California, Illinois, Connecticut, and New Jersey are all under restriction.

Is your state coming soon? Are these lockdowns being rolled out incrementally, starting out gently (sure you can walk your dog!) and then moving on to the point where you can’t leave your house without “travel papers?”

So far, 2020 has brought us an out-of-control deadly pandemic, an economic collapse, statewide lockdowns, and now travel papers and a potential new law to eradicate the Fifth Amendment.

I hesitate to ask what’s next.