How to Survive the Civil Unrest That’s Coming to America 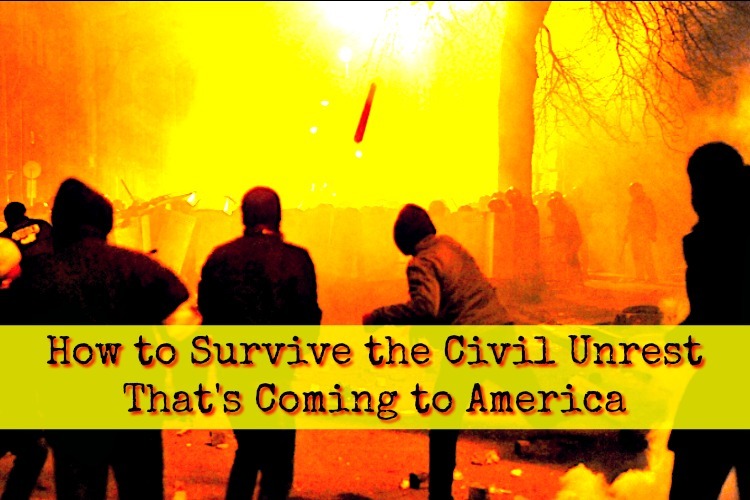 The rhetoric in the United States is heating up and we’re sounding anything but…well…united. It seems to most media pundits like we are too far down the path to Civil War 2.0 to turn back now. Activists are laying siege to government offices. Threats toward people who disagree are growing in ferocity. It’s ugly and getting uglier. It’s a powder keg that is about to erupt. (Here are some thoughts on what a full-fledged Civil War might look like.)

It is only a matter of time before civil unrest begins to escalate and spread throughout the country. Many people are wondering, how do you keep your family safe during widespread unrest? It’s not about being fearful. It’s about being prepared.

My thoughts on this manipulated division are fodder for another article. (You can find it here.) This article is apolitical (to the best of my ability, anyway) and focuses strictly on what you need to know to survive should the unrest come to your neighborhood.

You need to understand how riots unfold.

First things first, you need to understand how this kind of unrest unfolds so that you can see the warning signs earlier. Never underestimate the power, rage, and motivation of a mob.

Tess Pennington wrote about societal breakdowns in more detail – read her excellent article for more information on these predictable scenarios.

Some people are just waiting for the opportunity to behave in this fashion. They’d love to act like that every single day, but they don’t want to spend the rest of their lives in jail. But when a verdict gets rolled out, when a storm takes out the power, when a disaster strikes, they delight in the chance to rob, pillage, loot, and burn.  Who can forget the day before Superstorm Sandy hit the East Coast, when thugs were coordinating looting rampages via Twitter?

I remember learning about “sublimation” in a high school psychology class.

Sublimation is a defense mechanism that allows us to act out unacceptable impulses by converting these behaviors into a more acceptable form. For example, a person experiencing extreme anger might take up kickboxing as a means of venting frustration. Freud believed that sublimation was a sign of maturity that allows people to function normally in socially acceptable ways. (source)

If you believe Freud’s theory, then it’s easy to see that many people look for an excuse to revert to their true natures.  In a situation where “everyone” is doing something, they are able to cast off the normal control of their impulses without much fear of reprisal. The number of looters and thugs far outstrips the number of arrests going on in Baltimore, so there’s a very good chance that someone swept up in that mentality can go burn somebody else’s home or business and completely get away with it.

With situations of civil unrest, it isn’t as clear-cut as disasters like a looming storm or a chemical spill.  It depends on where you live. In a small town, far away from riots and protests, your lockdown area could be much greater than your own home. It could encompass your immediate community, too, and life might go on as it always has for you, aside from the need to stay just a little closer to home than before.

However, if you live in a city or suburb, it may become essential to make a decision quickly. Do you lock your doors and stay home? Or do you get out of Dodge?  It is a question only you can answer. One thing that is very important is this: if you need to go, do NOT miss your window of opportunity to do so safely. If the entire city feels the same way, you’ll most likely be stuck in traffic and trapped in your car. Protesters have shut down the highways more than once in recent years, and you’ll be far safer behind the brick and mortar of your home than you will be in your car.

By the way, there’s always someone who chimes in with a snide remark about how cowardly it is to lockdown with your family in order to stay safe. Blah, blah, blah. If you want to go get involved in a battle to make a political point, that’s certainly your prerogative. However, my priority is the safety of my family, and as such, I hope to avoid engaging altogether.

The first thing you need to do is get home.

If your area is beginning to devolve, the first thing you’re going to want to do is to get everyone in the family home. (Or if your home is in the thick of things, to a safer secondary location.)

The reality is, family members are likely to be at work or school when things start to break down. You need to have a plan laid out in advance to get everyone together and you need to be flexible enough to know when to go on to Plan B.

Be ready for lockdown.

Once you make your way home or to your bug-out location… STAY THERE.

By staying home, you are minimizing your risk of being caught in the midst of an angry mob or of sitting in stalled traffic while looters run amok.  In most scenarios, you will be far safer at home than you will be in any type of shelter or refugee situation. (Obviously, if there is some type of chemical or natural threat in your immediate neighborhood, like a toxic leak, a flood, or a forest fire, the whole situation changes – you must use common sense before hunkering down.)

Staying home is the number one way to keep yourself safer from during a civil unrest situtation. If you find yourself in an area under siege, the odds will be further on your side for every interaction in which you avoid taking part. Every single time you leave the house, you increase your chances of an unpleasant encounter.  Nothing will be accomplished by going out during a chaotic situation.

Try to stay under the radar.

Your best defense is avoiding the fight altogether. You want to stay under the radar and not draw attention to yourself.  The extent to which you strive to do this should be based on the severity of the unrest in your area. Some of the following recommendations are not necessary in an everyday grid-down scenario, but could save your life in a more extreme civil unrest scenario.

Be prepared for defensive action.

If, despite your best efforts, your property draws the attention of people with ill intent, you must be ready to defend your family. Sometimes despite our best intentions, the fight comes to us.  (Have you seen the movie The Purge?)

Many preppers stockpile weapons and ammunition for just such an event.  I know that I certainly do. Firearms are an equalizer. A small woman can defend herself from multiple large intruders with a firearm if she’s had some training and knows how to use it properly. But put a kitchen knife in her hand against those same intruders, and her odds decrease exponentially.

When the door of your home is breached, you can be pretty sure the people coming in are not there to make friendly conversation or borrow a cup of sugar.  Make a plan to greet them with a deterring amount of force.

Again, even if your plan is to bug in, you must be ready to change that plan in the blink of an eye. Plan an escape route.  If the odds are against you, if your house catches on fire, if thugs are kicking in your front door… devise a way to get your family to safety.  Your property is not worth your life. Be wise enough to accept that the situation has changed and move rapidly to Plan B.

You have to remember that civilization is just a veneer.

So many times, when interviewed after a disaster, people talk about being “shocked” at the behavior of others.  Their level of cognitive dissonance has lulled them into thinking that we’re safe and that we live in a civilized country.  They are unwilling to accept that civilization is only a glossy veneer, even when the evidence of that is right in front of them, aiming a gun at their faces, lighting their homes on fire, or raping their daughters.

They refuse to arm themselves and prepare for an uncivilized future.

Accept it now, and you’ll be a lot better off when the SHTF.

Look at what happened during the Ferguson riots. Look at the behavior of the stampeding masses on any given Black Friday shopping extravaganza. Look at the horrifying rhetoric espoused by people angry about the politics of our country.

Then tell me again how “civilized” our country is.