Emergency Lighting: The Importance of Illumination in Your Preps 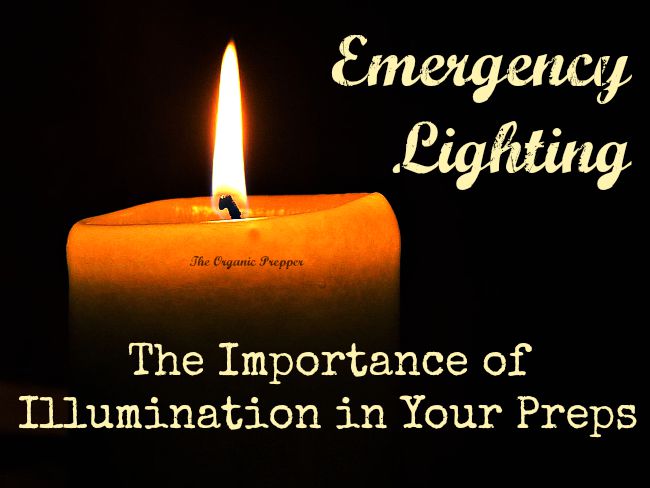 How important is light?  Well, in the Bible, on the  first day, the very first thing God created was light. This signifies exactly how vital a role illumination plays in  any situation.

Any person who has ever moved from the city to the country can agree, there is no darkness quite like that of being in a place where there are no streetlights, no neon signs, no car headlights, and no light from nearby houses.

When we first moved far away from the city to our little cabin in the woods, the darkness there was of an entirely different variety from city darkness. I’ll never forget the first evening when the moon was hiding. It was a cloudy night that also hid the stars and the blackness was almost palpable. I had stepped outside to take the dog out for her last walk of the evening, and even she was disconcerted by the thick darkness. You literally couldn’t see your fingers waving in front of your face. I like the night – the stillness of it, the rustling music of the nocturnal world going about its business – but when you suddenly become essentially blind, it can make you feel a little panicked or afraid. You can’t see, but you wonder what is out there that can see you.

Multiply that feeling greatly if you are in a situation that is already dangerous or unfamiliar, and then you can start to contemplate how vitally important to your psyche a reliable source of emergency lighting will be in a crisis scenario. While fear can be a very important survival mechanism, you don’t want it to overwhelm you to the point that it becomes debilitating.

Complete darkness after a disaster

This was the kind of darkness experienced more than a year ago when Hurricane Sandy took out the power in New York City.  The city that never sleeps was suddenly cast into the same kind of pitch blackness as you would find in the middle of a forest on an overcast night.

The extreme darkness wrought psychological havoc on many people.  Not only were children afraid, but adults found the complete blackness of the nights to be disconcerting, at the very least.  Crime went up when people realized they had the complete cover of a pitch black night.  Instead of being a restful time, night became something to endure until the sun came up.  Small tasks were difficult, if not impossible, to accomplish once the sun went down.  For those who had a few flashlights or candles on hand, those light sources soon ran out as the crisis extended into yet another day without power.  Add the darkness to the lack of power, heat, and sanitation facilities, and it made a terrible situation even harder to endure for many who were not prepared with emergency lighting sources. 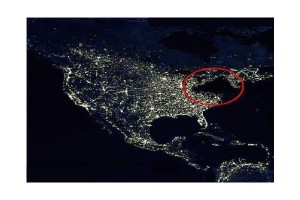 The psychology of why we fear the dark

Psychologically speaking, emergency lighting should be near the top of your list for preps.  Although most adults would be loathe to admit it, nearly everyone is unsettled in complete darkness.

This fear is not necessarily irrational. It may be somewhat ingrained in our DNA, as many predators are nocturnal.

It isn’t always so much a fear of the darkness itself, but more a fear of the unexpected: you can’t see what is out there in the blackness with you.  You have lost one of the senses that you rely on the most to assess impending danger – your vision.

You should have several different sources of light included in your preparedness supplies.  Some of the sources should be easily renewable, in the event that a situation exceeds your supply of replacement batteries.

Here is a list of a few alternative light sources to consider adding to your preps:

Emergency lighting for children can pose some very real concerns. You don’t want to give them a light they might accidentally leave on as they fall asleep, using up valuable battery life, nor would most parents want to leave a child in the room with a candle or oil lamp because of the risk of fire.

Here are a couple of safe options for kids:

Some complimentary supplies to keep on hand along with your alternative lighting sources:

Prepping your home for a power outage

Be sure to keep your supplies where they are easy to find in the dark. We don’t always have a warning before a power outage occurs, although when a bad storm blows up you might want to consider having your alternative light sources at the ready.

When my daughter and I spent a winter in a little cabin in the north woods of Canada, we lost power so frequently that we kept candles and a box of matches out as part of the “decor” in every room in the house. We also had flashlights in the top drawers of our end tables.  It was a quick thing to immediately be able to supply light when the electricity failed. As well, several lovely old kerosene lamps were scattered around the cabin.

Depending on the situation, you might not want your home to be the only one in the neighborhood that is well-lit.  Consider having supplies to cover your windows so that your home is not a beacon to those who are less prepared.  Blackout curtains or heavy duty garbage bags duct taped to the windows can keep most of the light contained.

Don’t sit there in the dark during a crisis

Proper lighting is one of the most psychologically vital preps that you can make.  Being scared of the dark isn’t just for kids.