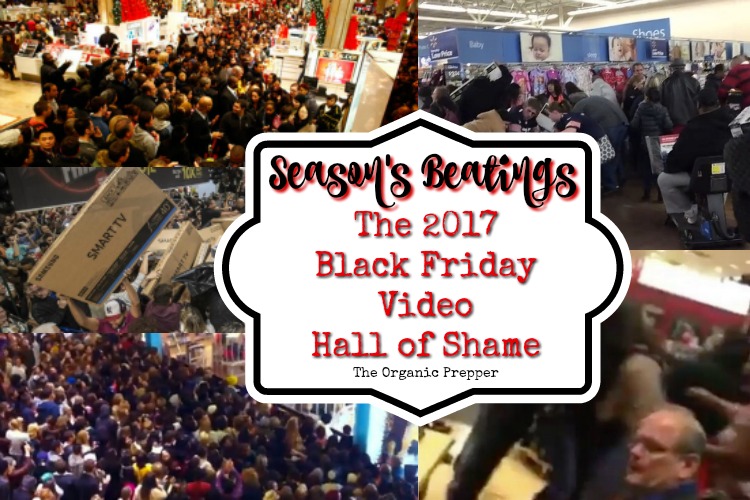 Another year, another humiliating Black Friday in the bag.

American shoppers continued to embarrass themselves in the eyes of the world during this year’s shopping extravaganza. While smart shoppers stayed home and avoided the insanity by ordering gifts online, the melees were alive and well in malls and big box stores across the country. Things started off with a bang – literally – when a guy got shot in Missouri and last night when mall in Alabama had to be closed down due to grownups behaving badly.

When it’s hard to tell the difference between that brutal cornucopia scene in the Hunger Games when everyone is running for a weapon and shoppers on the day after Thanksgiving, it’s pretty evident that we have a serious problem. Let’s warm up with this video. Start at 1:45/

Watch these videos, and just imagine if these people and their children were hungry.  What if you stood between them and the food they felt they should have? Do you really think that they’ll be more civilized when the prize is life-saving food and not a cheap TV?  Is there really any question that preppers should be armed?

Use this as a case study in collapse behavior. Last week, I wrote about a food stampede in Morocco in which 15 people were killed and 40 hospitalized over $16 worth of groceries and compared the two examples:

Every year, on “Black Friday” we get a glimpse of the kind of behavior that causes people to be crushed to death and assaulted. The day after Thanksgiving (ironically) people get up before daylight, stand in line, and shove their way through a crowd to get the best deals. (Stay tuned this weekend for the 2017 Black Friday Hall of Shame.)

And they aren’t even hungry.

People climb all over each other for cheap electronics. Fistfights erupt over vegetable steamers. People are ready to throw down and do battle for sale priced bath towels and televisions. (source)

The madness also spread to the UK and Brazil, where other scenes of frenzied shopping ensued. Well, let’s get started and see what fresh humiliation this year has brought us.

Fist Fight at the OK Coral – oops I mean K-Mart

It’s hard to see what started this fight last night at a K-Mart store somewhere in America, but one guy sure got the worst end of it.

Grown Men Fight over a Toy Car at Wal-Mart

Fisticuffs were also exchanged at this Wal-Mart store. Four “adults” got grounded after fighting over a toy car, when an employee told them “Neither one of you get it.”

A To-Do Over Towels

No violence, but these folks just about lost their fool minds over a great sale on towels.

The Most Touching Black Friday Moments

If by touching, you mean a total feeding frenzy complete with shoving and snatching. Here’s a compilation, with clips of glory from all over the nation.

And we have Black Friday Fights, Episodes 1-4

This guy made the first video and probably thought, “wow, that’s gotta be the worst of the year” and then had to add 3 more episodes to contain all the crazy.

Good grief, people. Get ahold of yourselves. The biggest problem is, most of those folks probably aren’t the slightest bit ashamed, even though we’re embarrassed for them. For more videos, be sure to check out Mac Slavo’s annual “Running of the Sheep” report on SHTFplan.

Things will be crazy all weekend long. I certainly won’t be venturing into any shopping establishments until next week. If you want to stay in (like we did) and do some online shopping, it’ll definitely be more dignified (and safer.)  Here is a list of the top 5 products on sale in my online store, Preppers Market, and a list of the tops deals from Amazon.