SURVIVAL Is Just About Surviving 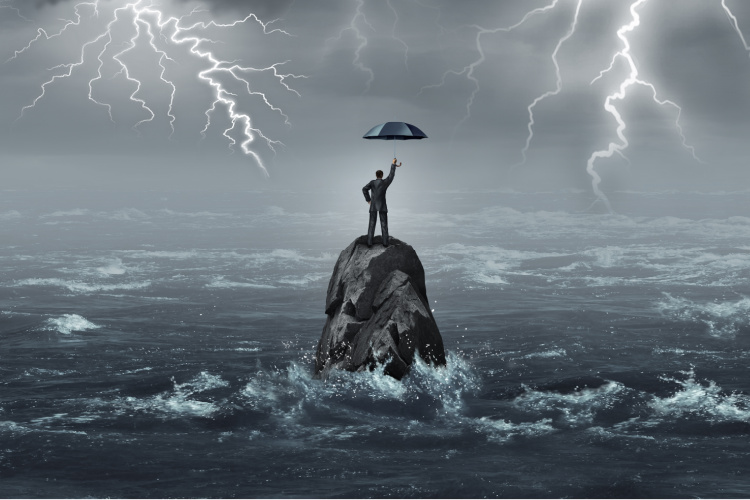 In the world of preparedness and survival, there’s a lot of crossover with things like liberty, patriotism, and a healthy suspicion of anything that smacks of a potential loss of our freedoms. Many people in this arena feel that it’s all one big topic.

But it’s not. While it’s absolutely related to being prepared, the thing that a lot of folks on the internet forget is this:

Survival is just about surviving

Preparedness and survivalism are different and the former is more about thriving in an extended situation. I believe in a two-pronged approach of immediate survival and long-term preparedness and resilience. Today I just want to talk about survival itself. I’m not talking about long-term scenarios during which you’d be constantly on the run using this philosophy, but about immediate threats that you must handle in the moment.

When bloggers like me give advice on dealing with an emergency, we are talking specifically about how to get through it alive, whether it’s a mass shooting, a death-defying wildfire evacuation, or riots at your front door. I want to help you prepare physically – by having the right gear and supplies – and mentally – by knowing what to expect – so that you and your family survive.

But it has become difficult to write an article without filling it with disclaimers, lest the comments section be filled with irate people who want to know, “What about ….(fill in the theory)…?”

I have a simple answer for this that the ones who demand I agree with their specific theory probably aren’t going to like.

Survival is about surviving.

It’s not about politics, false flags, conspiracies, patriotism, your rights, or “how things should be.” If we lived in a perfect world, our rights really would be assured, everyone would play by a predictable set of rules, and things would be “how they should be.” Educating others on how to survive an event is not an endorsement of the event as it’s portrayed by the media. It means the author is using the event as an example that can help others if they find themselves in a similar unfortunate situation. The theory proposed in the comments may well be correct, but if in sharing that theory, you are dismissing the essential survival principles, you’re doing a disservice to those who may one day need the information.

We don’t live in that utopian world

On our side of the Matrix, which is the real world, things are just not ideal. Things aren’t always “as they should be” and rights are not always inherent. They can vanish in a heartbeat given enough opposing firepower. Knowing the truth will not necessarily set you free. While the chaos is occurring, the truth really doesn’t matter. Please note that I love a good conspiracy theory as much as anyone, and I do also don the tinfoil from time to time.

Your immediate focus during a mass shooting should be not dying. It should be figuring out where the gunfire is coming from and getting your family to adequate cover.

That is survival, the other stuff is extraneous

Do you think you’ll suddenly become impervious to bullets or explosives if you say in the midst of the chaos, “AHA! You’re from the government! This isn’t real!” No. You’ll just get shot or blown up knowing who shot you or blew you up. That’s really not very satisfying if you end up dead.

If you are in a neighborhood that is under attack by “protesters”, your immediate focus should not be whether or not George Soros or the politician you most dislike funded this busload of angry people to your city. It shouldn’t be whether or not you have the right to fly an American flag in the midst of a mob of rabid, radicalized anti-Americans. It shouldn’t be about “the Marxists.”

Your immediate focus if you find yourself in a riot zone should be keeping your family alive and uninjured. It should be preparing a defense and hoping you won’t need to enact it. It should be arming yourself with fire extinguishers and putting out a blaze because 911 is not coming.

You can’t chant an incantation to dispatch the influence of the person who paid them and suddenly make the attackers all vanish in a puff of smoke just because YOU KNOW who paid them to do so. You have to face the actual problem which is a bunch of angry people who are coming for you, your family, and your property.

But some people keep missing the point of survival

Every single time, I see in the comments people who have entirely missed the point. The point is how you will get through a situation alive. For some reason, every preparedness article that mentions an event ends up splitting into two different discussions. The two conversations aren’t even apples and oranges because those are both similar enough to be fruits. They’re like apples and pogo sticks. They couldn’t be further apart.

In some ways this is harmless. But in other ways it is delusional and life-threatening. For example, if you don’t bother learning everything you can about surviving a certain type of situation because of a conspiracy theory. You have to stop getting hung up on small details. Like, whether the guy who got shot by the cops deserved it or was a saint. I can write a 4000-word article loaded with research and information. But, there’s always that one who finds one line and says, “Well, clearly you have no idea what you’re talking about because you said the earth is round when it’s obviously flat.”

Then there are the people who say that they shouldn’t have to do a certain thing in order to survive. Of course, you shouldn’t have to. But you have to read the situation. Then decide what you are going to put first, your life or your right to further enflame the angry mob.

Is it really worth it?

You have to decide if your lofty moral imperatives are really worth dying for. And, if they are, then, by all means, get blown away by the cops that want to pry the gun from your cold, dead fingers. As for me, I’ll hand mine over. Then I will go scuba diving in the lake hoping a waterproof container fell out of a boat with someone else’s unregistered firearms.

I intend to live to fight another day and I will choose my battles strategically. I’m not going to be so blinded by my devout belief in a particular conspiracy that I’m unwilling to accept that I’ve got a situation on my hands that I must deal with immediately. And, I’m not going to be so naïve that I refuse to put the safety of my loved ones before the “rights” I wish to stubbornly assert. And friends, I get it. I am stubborn. It stings if I have to take a step back in a confrontation, but it’s probably not going to kill me.

You have to prioritize the thing that is most likely to immediately kill you.

During the event, it doesn’t matter who’s responsible. It doesn’t matter if it was a set-up for some political agenda or if it was paid for by some rich dude who’s up in everyone’s business. Sometimes in this community, people can be so dismissive that those who really want to learn how to survive a violent event feel foolish. There are people who belittle valuable advice because they’re so hung up on their theories about the events.

When bullets are real, it doesn’t matter who is firing them at you or why. What matters during the event is surviving it.