How to Survive a Sniper Attack 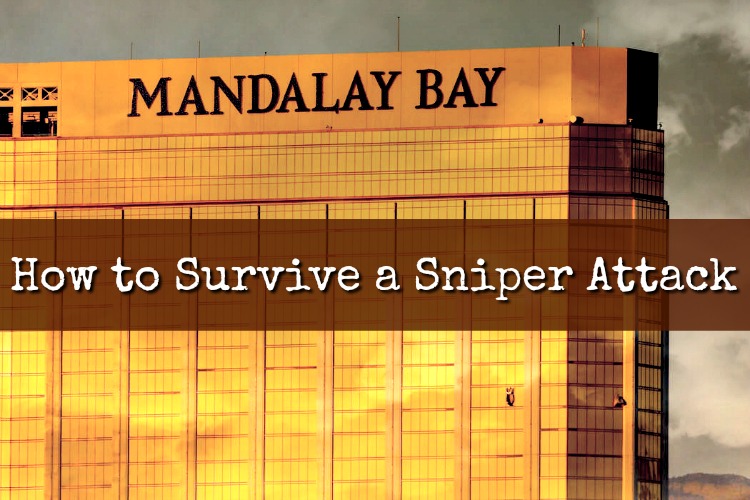 Of a tragic necessity, we’ve all read articles and watched videos about surviving an active shooter terror situation. But an entirely different set of rules apply when it comes to surviving a sniper attack.

The thing with an event like the one in Las Vegas is that a great deal of your survival depends on nothing but luck. If you happen to be in the wrong place at the wrong time, skills won’t necessarily save you.

The Las Vegas shooting was different than many previous mass shootings because the culprit was not right down there in the thick of things, as in the Pulse nightclub shooting. He was a sniper, 400 yards away from his target of 22,000 people attending a concert. 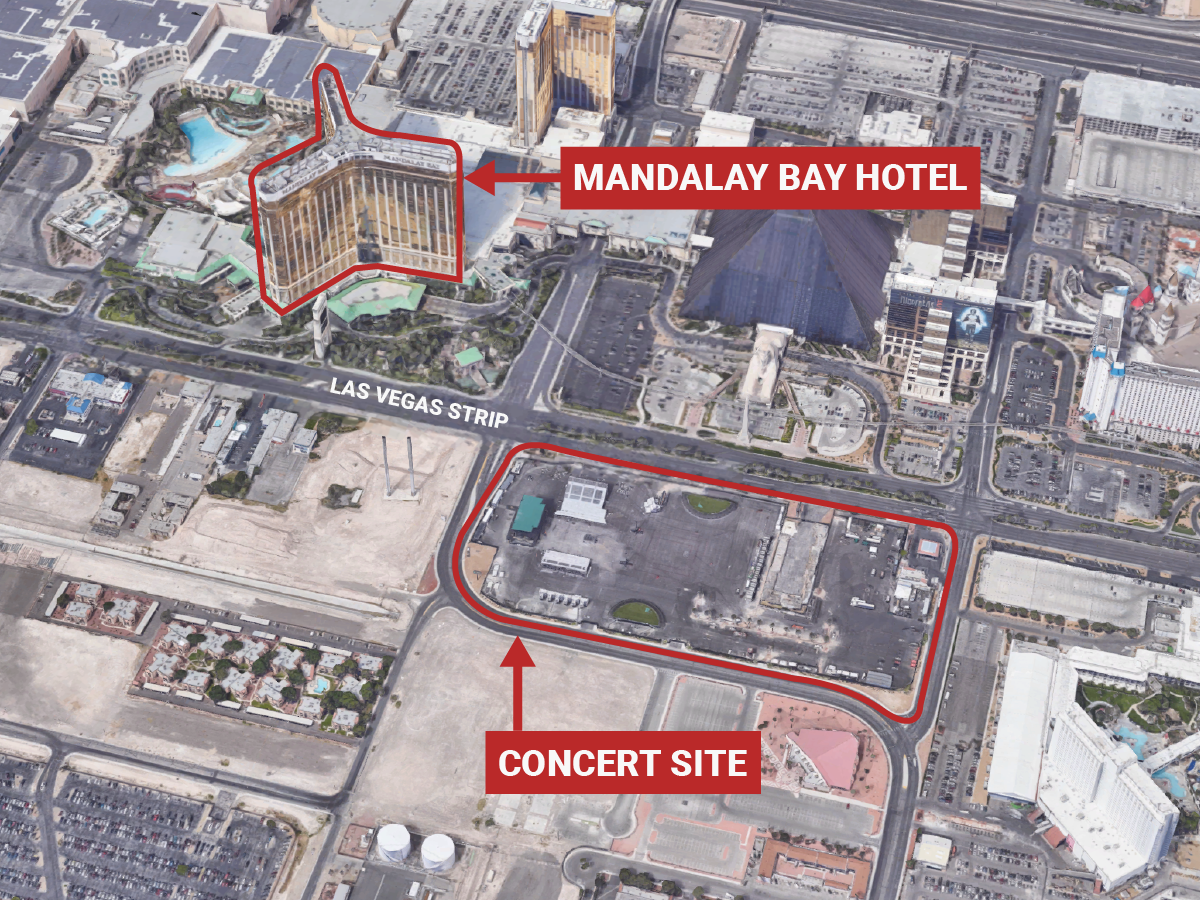 This situation was different from other mass shootings due to the distance. The standard advice of run, hide, or fight was completely useless. People had no idea where the shots were coming from, which meant they didn’t know where to run. Hiding is not easy in a wide open space that is similar to a giant parking lot without the cars. And finally, you can’t fight an enemy that far away – even if you were a concealed carry holder, your carry firearm won’t shoot far enough, and identifying the threat from that distance while everyone is panicking would be all but impossible.

As well, because of this distance, none of the evasion techniques like running in a zig-zag pattern or getting down were likely to make a huge difference to a person so far away whose apparent goal was only to hurt or kill as many people as possible. He was not aiming at specific people from that distance. He was firing at a general area. Here is a photo of the shooter’s view, from the window of his room to the concert area. 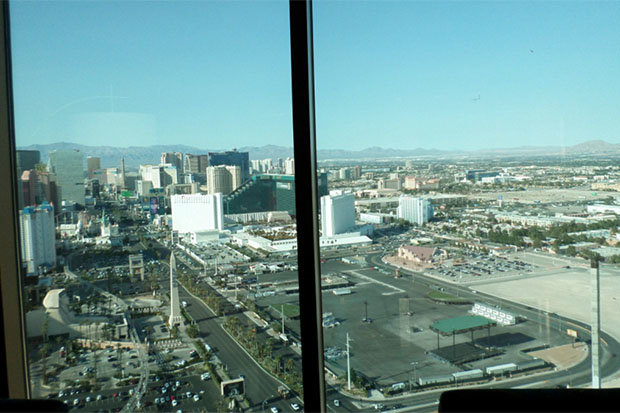 As you can see, the target was a general area, not specific individuals.

This is a report from the Washington Post that quotes people who were there. You’ll see how this information is applicable when you read the tips below.

The typical advice for reacting to an active shooter — ‘run, hide or fight’ — was rendered moot, as many in the packed crowd could not easily run or hide, nor were they able to fight back at someone firing from so far away.”

— “Outside, The Strip, always a blizzard of dazzling lights and honking horns, almost instantly turned into a frenzied hive of pulsing police lights and sirens,” Michael Lyle, Heather Long and Marc Fisher report. “People fled every which way, many taking cellphone video of their run to safety. [Former minor league baseball player Todd Blyleven, who traveled from Dallas for the concert with his wife and friends], helped carry out the lifeless body of a young woman. He saw a police officer who looked like he had taken a bullet in the neck. ‘Young girls and guys, older folks, just people walking out of a country concert with bullet holes,’ Blyleven said.”

— “Aldean was barely five measures into ‘When She Says Baby,’ when the shots started,” Avi Selk and Amy B Wang report. “’Is that gunfire?’ [Singer Jason] Owen remembered thinking[.] The gunfire continued, steady against the beat of the song … Shot after shot, faster and faster. Aldean sprinted off the stage. Owen ran, too. So did other singers, workers and all the thousands of spectators — fleeing and screaming, falling and dying.”

— A fire alarm triggered by gun smoke let first responders zero in on the shooter’s location. SWAT team members then used explosives to get inside, where they found [Paddock] dead from a self-inflicted gunshot wound. “We believe the individual killed himself prior to our entry,” the sheriff said. (Cleve R. Wootson Jr.)

— “I realized people were dying”: Photographer David Becker spoke to The Post’s photo editor MaryAnne Golon about witnessing the attack and capturing some of the most haunting images from the night: “ It had been so dark outside I couldn’t see the details. I just saw a lot of people laying on the ground thinking they were playing possum, but now I could see people covered in blood and I thought, this is real. When I saw the image of the woman lying on the ground covered in blood, that was when the impact of what I was experiencing hit — when I realized people were dying.”

How do you survive a sniper attack?

A sniper attack is very different from any other kind of mass shooting, so the rules for surviving those attacks don’t apply here. This is what I learned when researching a horror scenario like the Las Vegas massacre.

A lot of people who were interviewed said that when they first heard the shots, they didn’t realize what it was. They thought it was fireworks. There were precious seconds when people were frozen targets while they tried to wrap their brains around what was actually happening. During an event like this, a pause of a few seconds could mean the difference between life and death. The faster you take action the more likely you are to survive.

Always have a plan.

We can’t foresee all eventualities, like this one, for example, but it helps to always have a survival mindset. It has long been a game with my kids (yeah, we’re a strange family) to identify exits and potential weapons if we sit down to eat at a restaurant or go to the movies. Knowing where to go without having to look for it in the heat of the moment will save time that could be spent acting.  After this incident, I’m adding to that the search for places we could take cover in an emergency.

Understand the difference between cover vs. concealment.

Every NRA course I’ve ever taken discusses the difference between cover and concealment, because in many cases when you are forced to use your own firearm, there’s another person who is ready and willing to shoot back. Concealment is enough to hide you but not enough to protect you from bullets. Cover is something sturdy enough to stop a bullet – a concrete structure like a road divider, the engine block of a car, a refrigerator, a steel door, a brick wall.

When watching the video playback of the Las Vegas shooting, many people were seeking concealment behind flimsy barriers, and that is not enough to protect yourself in a situation with a high-powered gun and a shooter spraying an area.

Separate from the crowd.

In a situation like this one, the shooter was trying to take down as many people as possible, so it was most likely he was aiming at the crowd instead of picking off people who moved away from the bulk of the group. One possible strategy would be, then, to get away from the crowd. You and the person/people you are with would be less alluring than a group of a hundred panicked people all huddled together where maximum harm could be achieved.

Don’t get down or play dead.

Lots of people crouched down and got as low as they could. In many situations, this would be the best bet, but not this one. The person was shooting from up high, aiming downward. Being still and crouching down wouldn’t do much to protect you from a person firing from this angle, nor would playing dead. Action is nearly always a better choice than inaction. As well, getting down would make it more likely that you’d be trampled by a panicked crowd of people trying to get away. Clark County Fire Chief Greg Cassell said that some of a “wide range” of injuries included people who were trampled by the panicked crowds.

In a situation like this, there will be pauses in the shooting when the person stops to either reload or change firearms. That is your opportunity to make a dash for the exits. Don’t wait too long to make your move, because it only takes an experienced gunman a few seconds to reload a familiar gun and then your chance is gone.

Do you have other suggestions?

I’m not an expert. I don’t have law enforcement experience or military experience. So, I spoke to someone far more experienced in this type of thing than I am. Scott Kelley is a former Counterintelligence Special Agent, US Army Chief Warrant Officer, and combat veteran, as well as the author of Graywolf Survival,  and was kind enough to answer all my questions while I was researching this article. I incorporated many of his suggestions, but any mistakes are purely my own.

What about you? Do you have experience to add that might help people survive a sniper attack? Please comment with your suggestions and if you don’t mind, let us know a little bit about yourself. 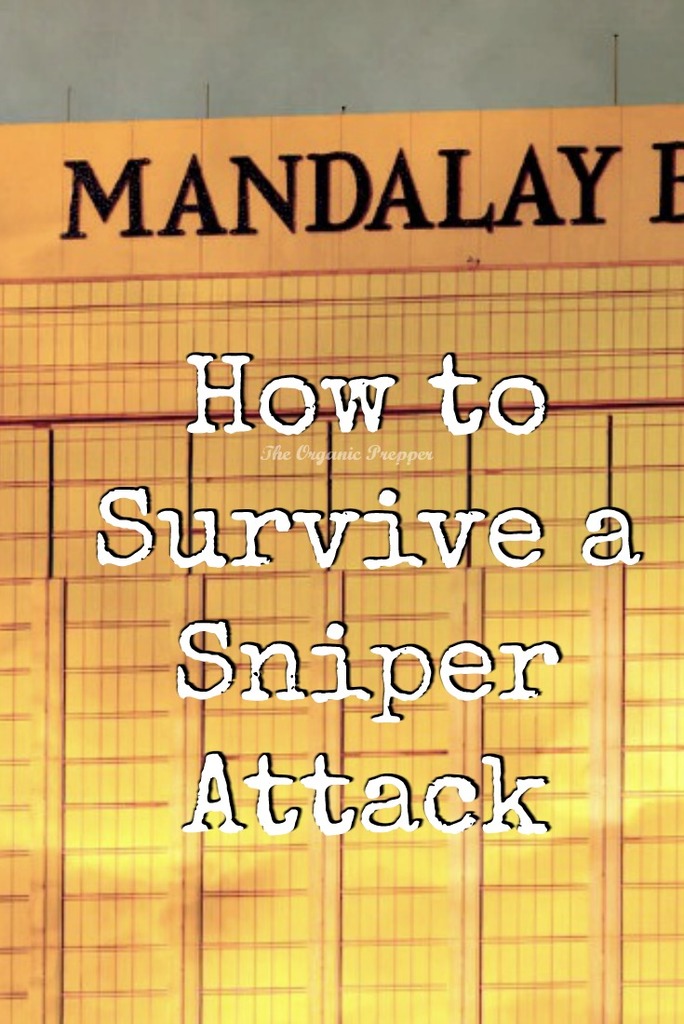 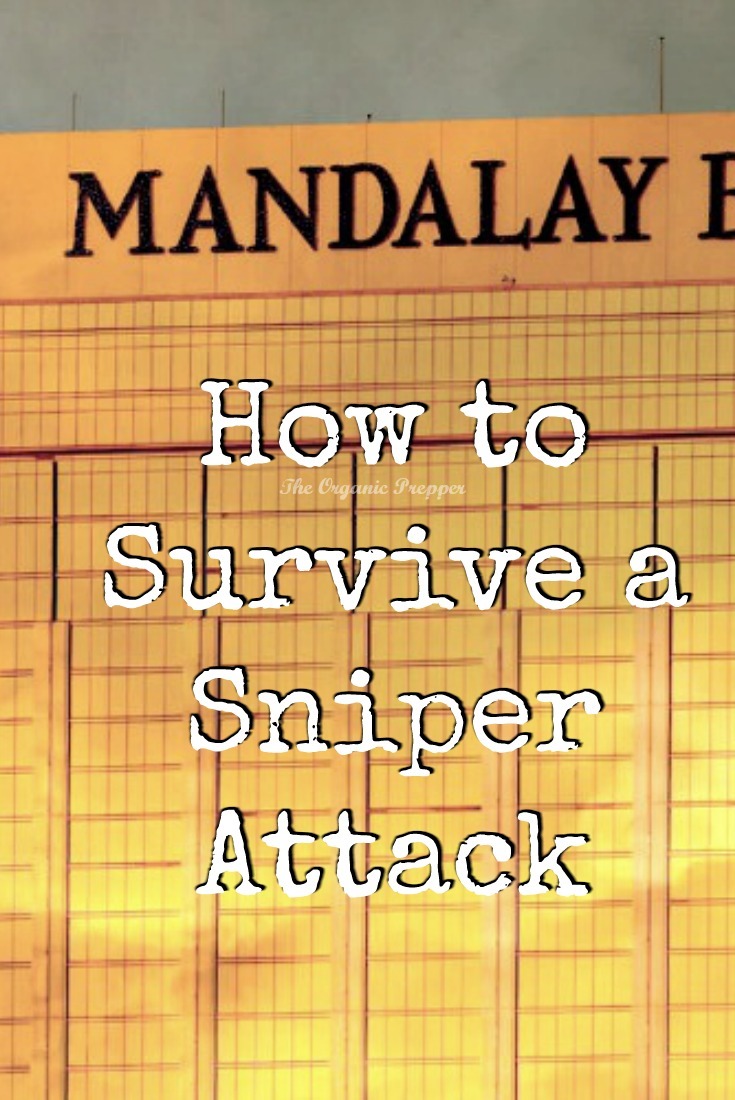