A Terrifying Eye-Witness Account of the Kenosha Riots: “Everyone in the city was getting ready for a war.” 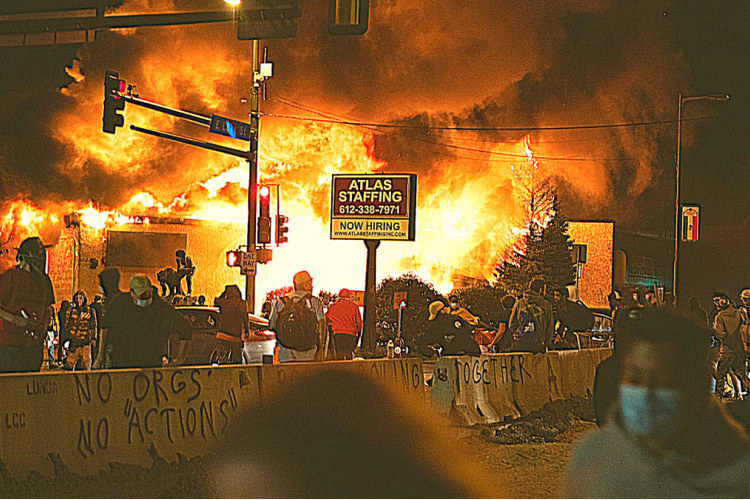 Much has been written about surviving riots and civil unrest. But there’s nothing like a firsthand account to bring it to life.

We shared an eye-witness story from a National Guard member who told us about the Seattle riots. Another writer shared her family’s experience during the Ferguson riots. We’ve seen brutal videos on YouTube and social media. The violence in our country is increasing dramatically.

Here’s a first-hand story of the Kenosha riots.

And now, a woman has shared on Facebook what her family recently experienced in the Kenosha, Wisconsin riots. In her post, the thing that stands out in my mind the most is that help was not on the way. The residents of Kenosha who stood their ground were completely on their own against the mobs rampaging through their neighborhoods. I’ve redacted some identifying information from her post – otherwise, the public post is exactly as she shared it on the social media outlet. All emphasis is mine.

The day of the worst destruction, fires, looting, assaults… all of us in Kenosha were able to watch live -via independent media. The entire start to finish. The worst of it happened on 22nd & 60th, and I live on [redacted], so to tell you I was terrified is an understatement. The majority of Kenosha was watching our two [redacted] live footage well until 3am… police scanners on… bracing for the worst. It was apparent from the beginning there was no help. No police, no fire trucks no ambulances. None. Structures burned to the ground, people hurt and attacked were loaded into cars and raced to any hospital they could get to, rioters just broke into businesses and took what they wanted.

And we all watched it happen. There was nothing we could do.

A sleepless night, we faced the next day with more fear. A massive clean up effort, we helped as many homes and buisnesses as we could, brace for the night, we started to get inundated with messages from individuals and groups … targeting violence to specific neighborhoods, schools, libraries.. with fires and destruction… lots of messages. Most specifically targeting LOCAL NEIGHBORHOODS… families!!!

Cars and buses were coming in to the city with no plates… caravans of groups. Again, no extra police or national guard.

But the rioters came to Kenosha that night again.

Our PD and any help it had was standing ground at the PD building and courthouse… and many rioters did not know… our PD was trying to keep them from burning these down, not only because it was our infrastructure but because right between those buildings were A LOT of local inmates that were currently there due to Covid closing our jail (HUBER).

Again live, we watched hundreds of rioters throwing Molotov cocktail s at these buildings and burning our city garbage trucks and dump trucks to the ground that we were using to protect these buildings.

I was afraid for the small line of policemen there that night.

Everyone was urging me and Jim to take all of my animals and to leave the city… and let my house burn. To run far away from Kenosha. I love my home. Those who know me, know the pride we have taken in buying an (as-is) house and turning it into a home. And my business! Could I let it be destroyed?? Absolutely NOT!

We have dear friends with a popular business just 4 houses away… we spend at least once a week there… they packed up boarded up and closed.. terrified … it’s on the main road.

All of us were now under now a state of emergency curfew. Get home and off the streets! gas stations ordered to close and turn OFF all gas pumps..
the sirens and alerts on all of our phones coming in non- stop.

So we pulled out every firearm we owned. Loaded them up. And started to get ready… We were not leaving… Jim’s job told him to stay home and protect his family and home.  Everyone in the city was getting ready for a war.

Are you starting to feel anxiety reading this?

Getting a grasp of how desperate we all were?

Knowing no law enforcement was helping? And I’m telling you… NO ONE was there.

I have a dear friend who lives in Gurnee. Has a home and a buisness there, and if she called me and Jim and told me her city was under attack, she was afraid for her LIFE and her store … I would help her. We would go to Gurnee and help her. Armed.

And that’s simply what happened. The residents started to realize this was on us. And we organized. Groups and individuals-On rooftop businesses -in the neighborhoods. I felt a little safer that night knowing we had some help.

So we watched again that night …live. Beginning to end.

At the lakefront… there was a small police presence again, where our courthouse and Pd is…. but the PD was nowhere else in the city. It was just us left to fend for ourselves, watching live feed again, Listening to the scanners … lights off, house alarm armed. Curtains drawn – guns ready as we listened to where the rioters were, which way they were headed. Despite the state of emergency curfew the city was flooded with cars driving around with no plates on, groups of people destroying our city. Not enough police to arrest or stop not ONE SINGLE PERSON.

Until the guard came to help… the entire city was left to its own defenses.

Hell… we ran out of plywood to board up!!!

I had the crates ready to throw the animals in and run… guns at every window and door. Constantly texting neighbors and friends around the city for updates.

When we say, if you don’t live here, you could not possibly know what was going on.. do you now understand? How afraid the whole city was?

The national guard FINALLY was called out – and did not mess around. The people who terrorized and destroyed Kenosha were not from Kenosha. Of all the arrests… most were from 44 other city’s. After our IDIOT governor finally asked, we got the help we should have had from DAY ONE. We had FBI and all the surrounding PD’s come to our aid.

If…you don’t live here… you could not possibly understand what we went thru. People should wait before they jump to conclusions. I just am disgusted beyond words at the judgement that’s happening. DISGUSTED

For those of you with children to protect, a business you put your heart and soul in… a home you struggled to own and pay for.. you have got to understand what we all went thru. The fear and the instinct to protect what you love, and what you worked so hard for is strong. I hope no one ever has to go thru anything like this. (source)

The damage in Kenosha is astounding.

Kenosha isn’t a huge city. It has a population of about 100,000 people. Until these riots, it was not considered a dangerous city. But things changed fast.

Here are some photos of the aftermath of the riots. Minus the damage from shells and sniper rifles, looks like a warzone to rival things I saw in Bosnia when I met with Selco and took one of his survival courses. 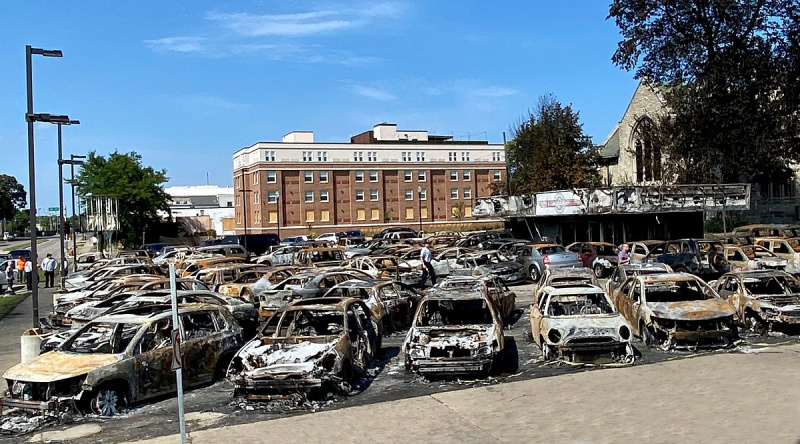 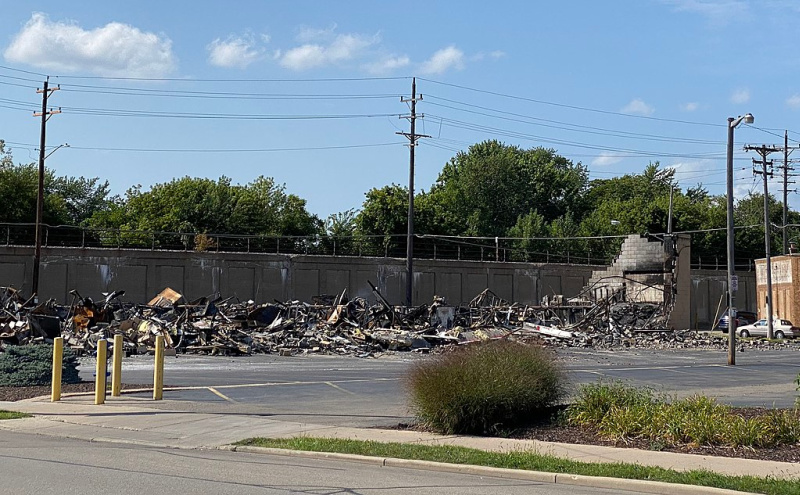 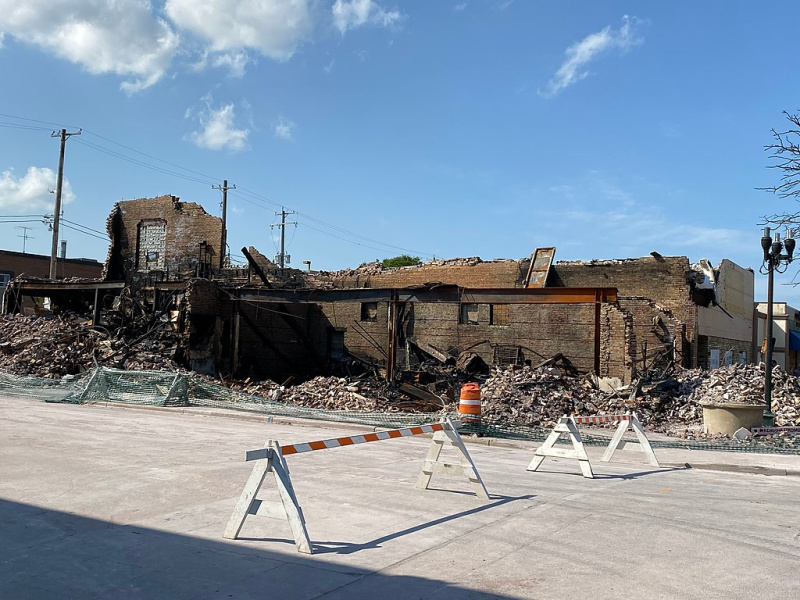 Is this the new America? If it’s this bad now, what’s going to happen after the election, particularly if the results are contested?

This is spreading across the country.

So many people are convinced this can never happen where they live. I see the denial all the time in the comments on my articles about this subject. And while it’s true that some parts of the country are more resistant to the riots and arson than others, it needs to be clearly understood that these are not locals perpetrating the damage. These are people being bussed in from other places. Time and time again, we see articles with local authorities claiming most of the arrests made were people from out of town.

This isn’t something you see coming a week ahead, like a hurricane on the horizon. One injustice, perceived or real, is all it takes to throw gasoline on a fire that is blazing across the country. It CAN happen to you, too.

A number of people in Minneapolis armed themselves to protect their families, businesses, and properties because they knew they were on their own. The story above only underlines that point. Literal battle zones are erupting across the nation. Armed conflict is already occurring and the writing is on the wall.

Be prepared for civil unrest and riots because you won’t have much warning should violence mobs deploy near you. Have a plan to leave if possible. And if that’s not possible, it cannot be more clear that you must be personally prepared to defend your home, your family, and your business because the police won’t be able to do it for you.