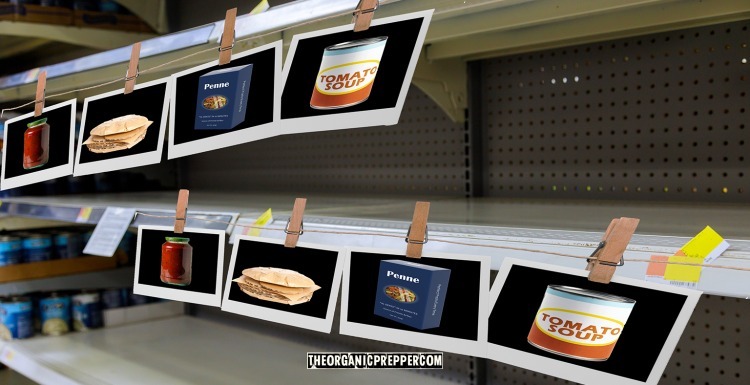 It’s only hypercritical people like me who think that the Biden administration is doing an utterly terrible job. The reality is, everything is just fine except for a few pesky hoarders who are causing problems.

The mainstream media, POTUS’s Chief of Staff, and White House spokeswoman Jen Psaki said so, and we all know they’re both utterly reliable sources.

In reality, grocery store shelves are full. They’re full because they took a page from the script of The Interview, in which two goofy journalists go to North Korea to interview/kill Kim Jong Un. At first, they fall for the propaganda, but then one of the journalists enters the shop that looks to be loaded with abundance only to find out that the food is fake.

After #EmptyShelvesJoe trended on Twitter last week, Zero Hedge reports that retailers got serious about covering the gaps. They pointed out that all over the nation, stores are filling shelves with a single line of the few things they have to make it appear the inventory is full and things are thriving, sharing the following tweets.

Our Safeway appears to be trying to hide the supply shortage by using single lines of products to fill shelves. Leading to this: pic.twitter.com/CDXR67FYRu

And it’s not just in the United States, incidentally. In London, a Twitter user claimed that Tesco had gone one step further and actually put out fake asparagus.

Tesco have the fake asparagus out this morning pic.twitter.com/QokEJGs81W

The comments on the Tweet (which is a reply to the asparagus Tweet) suggest that this photo is from Kroger somewhere in the United States. 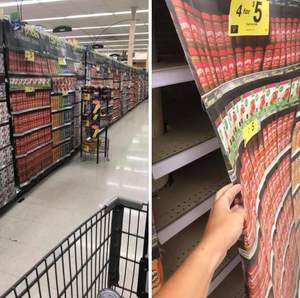 We’re sure that this is isolated and not a harbinger of things to come. Right? RIGHT?

Jen Psaki says this is actually a good sign.

And hey, you should rest easy because White House Spokesperson Jen Psaki wants you to know that these empty shelves are actually just a sign the economy is perking up.

Psaki took to CNN to try and defend Klain’s retweet, and even CNN called her out. Zero Hedge reports:

Psaki responded by saying: “The fact is that the unemployment rate is half of what it was about a year ago.”

“More people have jobs, more people are buying goods, that’s increasing demand. That’s a good thing. At the same time, we know supply is low because we’re coming out of the pandemic,” Psaki answers.

“What people should know is inflation is going to come down next year, economists have said that, they’re all projecting that,” she continued. (source)

I particularly love how Psaki boasts that the unemployment rate is better than when Fauci forced businesses to shut down, like this is some kind of accomplishment. Anyway, you all should stop complaining about your high-class problems, pay extra for your paper asparagus, and shut up.

It’s obvious that nobody in the White House actually cares about these problems because they’re not directly affected by them. They exist in a protected bubble where there’s plenty of food and plenty of money.

And of course, there are the “hoarders” to blame again.

Last year when the first lockdown occurred and the shelves were wiped bare in a matter of a day, the mainstream media blamed selfish preppers and hoarders. First of all, I’d like to point out that we preppers already had our stuff. Secondly, it isn’t hoarding to supply food for your family when you see things going downhill fast.

But “hoarders” are a handy scapegoat and a great way to turn people against those who are prepared.

“People are hoarding,” said CEO and founder Adnan Durrani. “What I think you’ll see over the next six months, all prices will go higher.” (source)

The USDA says there is NO shortage.

Anyway, keep your britches on. The USDA themselves assure us that there aren’t shortages in America.

There are currently no nationwide shortages of food, although in some cases the inventory of certain foods at your grocery store might be temporarily low before stores can restock. Food production and manufacturing are widely dispersed throughout the U.S. and there are currently no wide-spread disruptions reported in the supply chain.

USDA and the Food and Drug Administration are closely monitoring the food supply chain for any shortages in collaboration with industry and our federal and state partners. We are in regular contact with food manufacturers and grocery stores. (source)

Does any of this seem familiar?

I covered the fall of Venezuela in great detail before Jose came on board to share on the ground reports. Back in  2013, “hoarders” were threatened with detainment. Venezuelans were also told there was plenty of food.

Luisa Ortega Díaz, the Attorney General of Venezuela, issued a press release at the time.

The attorney general called on people to remain calm, not to fall for provocations, and not to be afraid of the “alleged” food shortage…

…According to a press release, the Attorney General Office has designated an ad hoc group of prosecutors to work nationwide with other authorities and cope with the threats against food security and, consequently, against the State. (source)

The government there took over the farms and production plants in 2015, but by 2016 had to admit that people were on their own, and there was no food.

If you are as concerned about supply chain issues as I am, you’ll be doing your level best to get prepped while some supplies are still available. Here’s some advice on prepping and creating your own supply chain.

What do you think about the shell game being played by the government and the media? Do you believe there are food shortages? Have you seen any of the “prop” food in your area? Are we being lied to yet again?