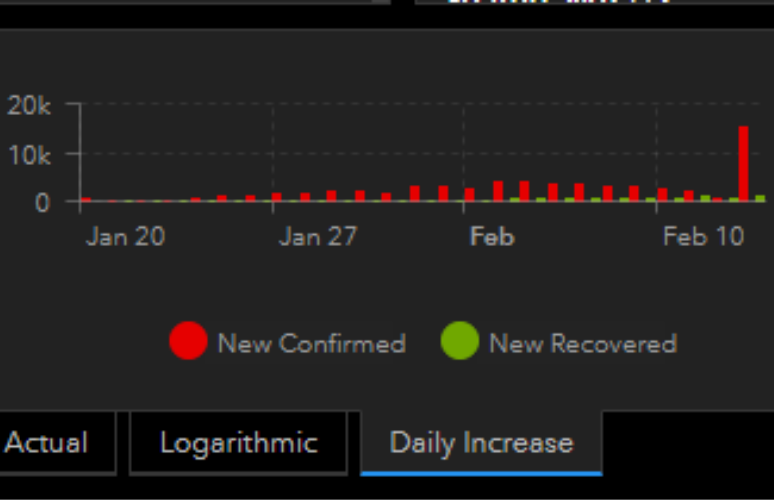 Yesterday, a shocking spike in the increase of novel coronavirus cases was reported. Before that, previous days’ numbers had made it seem as though the cases were beginning to level off, which would have meant the infection was being contained. Unfortunately, that part wasn’t accurate.

Then came yesterday, with approximately fifteen thousand new cases diagnosed. Before this number had regularly been about 2000 new cases per day.

It turns out that this is a bad news/good news situation.

It’s certainly awful to know that there were that many people diagnosed with a potentially deadly illness in one day. That’s the bad part.

But the good news is that the diagnostic criteria has changed, making it easier, faster, and less expensive for cases to be confirmed. And this gives us a much better look at what the world is actually dealing with in regard to the virus, newly named Covid-19.

Why the sudden increase?

For those of us who have been saying from the very beginning that the numbers from China didn’t add up, our fears have been confirmed. The sharp uptick strongly suggests many people who were ill were never confirmed as having Covid-19. Obviously, this lack of diagnoses would also mean that the death tolls we were given were way too low. Zero Hedge also noted that the Chinese government has been far less than forthcoming up to this point, still not allowing the CDC on the ground to aid in containment efforts.

Previously, the only way to get a confirmed diagnosis was to be administered a nucleic acid test. The tests took several days to return results, and they weren’t always accurate. Several people who died of the virus had four or five negative tests preceding their eventual diagnoses, including Dr. Li, the whistleblower who brought this to the world’s attention before succumbing to the virus himself. The nucleic acid test only returns positive results in the later stages of the illness.

The new diagnostic criteria is quick: all it takes is a CT scan of the patient’s lungs looking for certain visible symptoms.

…officials in Hubei now seem to be including infections diagnosed by using lung scans of symptomatic patients. This shortcut will help get more patients into needed care, provincial officials said. Adding them to the count could make it easier for the authorities to decide how to allocate resources and assess treatment options. (source)

While this increase is a horrifying number to see, it’s actually a good thing that we’re going to have a clearer picture of things like the R-naught and the spread of the illness.  Many health experts have praised this diagnostic change.

First of all, it will allow patients to be diagnosed more quickly. Then they can be isolated and treated with less risk of infecting more people.

Secondly, this confirms the suspicions of everyone from the alternative media to epidemiologists who believe that the true numbers have been inaccurate from the start. Since most of the bodies of those who recently died in China have been quickly cremated, that data is gone forever.

But hopefully, this broader diagnostic criteria will allow the real picture to emerge. Regardless of how ugly that picture is, knowing the truth is the only way to battle what could potentially be a global pandemic of proportions that have not been seen in our lifetime. (At least for those of us younger than 102.)

This thread on Twitter is written by a reporter for the NY Times who is based in China and has some very thorough information on the new diagnostic and treatment methods. Click on the Tweet to see her entire thread – it’s very informative.

1. There's a lot of buzz on the astronomical jump in cases from Hubei on Wednesday — 14,840 new confirmed cases, almost 10 x compared to a day earlier. New deaths rose to 242, more than double fr day b4. The govt has changed the diagnostic criteria used to confirm cases. More ..

Not all experts agree that this information is helpful. Dr. Peter Rabinowitz, co-director of the University of Washington MetaCenter for Pandemic Preparedness and Global Health Security, says the new method of diagnosis makes the whole thing more difficult to track. “It makes it really confusing right now if they’re changing the whole way they screen and detect,” he said. Now estimating the scale of the epidemic “is a moving target.”

We still don’t know exactly how it spreads

Although we may be seeing a rapid uptick in the numbers on this chart (click “Daily Increase” in the lower right-hand corner), we still don’t know enough about how the virus is spreading. The New York Times reports:

A single infected “super-spreader” can infect dozens of others. Outbreaks can seem to recede, only to rebound in short order, as the weather or conditions change.

Recent clusters of coronavirus cases suggest the new coronavirus not only spreads quickly, but also in ways that are not entirely understood.

In Hong Kong, people living 10 floors apart were infected, and an unsealed pipe was blamed. A British citizen apparently infected 10 people, including some at a ski chalet, before he even knew he was sick.

In Tianjin, China, at least 33 of 102 confirmed patients had a connection of some sort with a large department store.

“This outbreak could still go in any direction,” Dr. Tedros Adhanom Ghebreyesus, director general of the World Health Organization, said on Wednesday. (source)

It certainly does seem to confirm all the numbers we started with were wholly inaccurate. It also explains the rapid and expensive lockdown of millions of Chinese people that seemed like an overreaction with the previous, far-lower numbers.

As bad as it is, I’d rather have accurate information.

I can only believe that having accurate numbers will benefit those researching this virus and the spread of it. While it’s truly awful that so many human beings are becoming ill and dying, the only way to fight this is with knowledge and preparation.

And that knowledge can only come from accurate information.