20 Million People QUARANTINED in China for Wuhan Coronavirus: What to Do RIGHT NOW 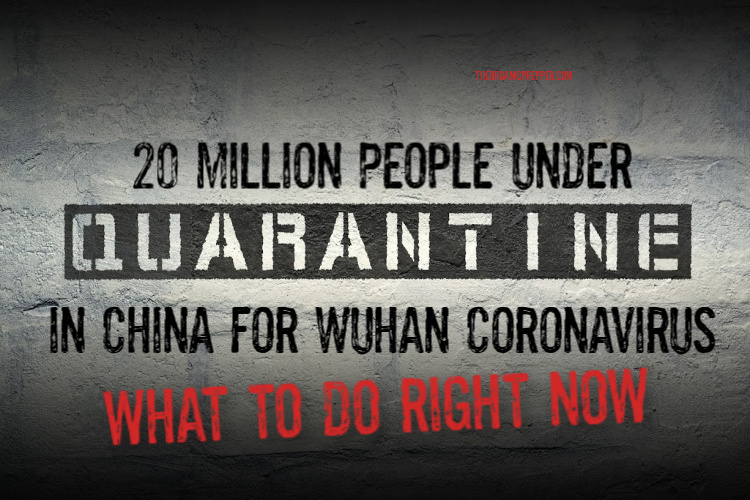 Yesterday we reported on everything we knew about the Wuhan Coronavirus, an outbreak in China that has reached Saudi Arabia, Singapore, Vietnam, the US, South Korea, Taiwan, Japan, and Thailand with confirmed cases.

This morning, we woke up to the news that China has quarantined three major cities with a combined population of more than 20 million people. That seems rather excessive (not to mention expensive and panic-inducing) for a virus with a proclaimed 2% death rate. The Guardian reports:

Authorities banned transport links from Wuhan, the capital of Hubei province, on Thursday, as well as the nearby central Chinese cities of Huanggang and Ezhou, suspending buses, subways, ferries and shutting the airport and train stations to outgoing passengers.

Chinese authorities still report only 633 cases, 95 patients in critical condition, and 17 deaths from the virus.

The move to quarantine Wuhan, Huanggang, and Ezhou has caused panic as residents of the cities rush to purchase food and other goods before supplies run out.

In Wuhan, supermarket shelves were empty and local markets sold out of produce as residents hoarded supplies and isolated themselves at home. Petrol stations were overwhelmed as drivers stocked up on fuel, exacerbated by rumours that reserves had run out. Local residents said pharmacies had sold out of face masks.

“When I saw the news when I woke up, I felt like I was going to go crazy. This is a little too late now. The government’s measures are not enough,” said Xiao, 26, a primary schoolteacher in Wuhan, who asked not to give her full name.

Few pedestrians were out and families cancelled plans to get together for the new year holiday. Special police forces were seen patrolling railway stations. Residents and all government workers are now required to wear face masks while in public spaces. Most outbound flights from the city’s Tianhe airport were cancelled. (source)

Due to the nobody-in-nobody-out nature of the quarantine, it is unknown whether supplies will be replenished.

This certainly shows how quickly things can change. Within a span of 24 hours, the people in these regions went from a warning about a virus to a near-SHTF scenario. Those who weren’t already prepped have little chance of getting well-stocked now.

People fled to try and escape the quarantine.

The Washington Post reports that censorship of information has been evident.

In a post that was online for less than an hour, the Wuhan Health Commission admitted Thursday that it was struggling under the strain of the outbreak.

“At present, there is an obvious increase in the number of patients with fever in the city, and it is true that there are long queues and a shortage of beds in fever clinics,” the commission said.

A post from Wuhan Railway saying that 300,000 people traveled by train out of Wuhan on Wednesday, headed to every corner of the country, was also quickly deleted. (source)

According to the same report, the quarantine may not have been instituted quickly enough to stop the spread of the virus. Many people fled the cities, while others remain trapped and angry.

The central Chinese city of Wuhan pulsated with fear and anger Thursday, as 11 million people awoke to news that they were being confined to a metropolis-sized quarantine zone designed to contain a widening coronavirus outbreak.

Many people flocked to the roads to try to avoid getting caught in the quarantine. Television footage showed health workers in hazmat suits taking motorists’ temperatures as they waited at toll booths.

Others did not make it out. Hubei’s highway management authority closed multiple expressways in and around Wuhan, and Wuhan traffic police confirmed that while vehicles were allowed to come into the city, they were prohibited from going out except in special cases.

Neighboring Huanggang said it would join Wuhan’s quarantine from midnight on Thursday, shutting down transport networks and telling people they should not leave the city without special reason. Nearby Ezhou announced it would close its railway stations “to efficiently cut off channels for spreading the virus.”
…In Wuhan, a city with about 3 million more people than New York, many residents were incensed at the sudden announcement of the travel restrictions on Thursday.

“I didn’t even receive a notice,” said one woman who found herself stranded at Hankou Station. She had been on her way from Henan province southwest to Sichuan and was changing trains in Wuhan when she got caught up in the suspension.

She said indignantly that she would go back to Henan. But when a reporter asked how, she conceded that she did not know.

Others interpreted the fact that the health authorities announced the travel ban at 2:30 a.m. as a sign that the outbreak was more serious than they were letting on.

“The notice shouldn’t come out so late, when everyone’s asleep,” said Jeffrey Yang, a 27-year-old Wuhan local working in the financial industry. “It makes people panic and feel like they’ve missed the opportunity to change their fate.”

…Some people resorted to extreme measures to escape the travel ban. One man who could not get a taxi to the station to catch an earlier train persuaded a food delivery driver to give him a lift on his scooter. The desperate traveler paid $72 to have the delivery man, who would usually make less than half that in a day, drop him at the station. “We were flying,” he said. (source)

Imagine being a traveler and suddenly being stranded in a city that is quarantined due to a mysterious virus.

Precautions in the US

Those who wish to be prepared should note the speed at which quarantines were put in place in China. Don’t delay placing orders for supplies, fueling up your vehicle, and adding last-minute preps to your stockpile. You may already have many of the supplies you need, so be sure to do an inventory before panic-buying.

However, if you discover you do need supplies, get them now. If you wait until a quarantine is announced, you’ve waited too long and you’ll be out there fighting for resources with everyone else in your area.

Whatever your plan is, don’t delay taking action. Otherwise, you might find yourself in the same situation as 20 million Chinese people who were suddenly quarantined.