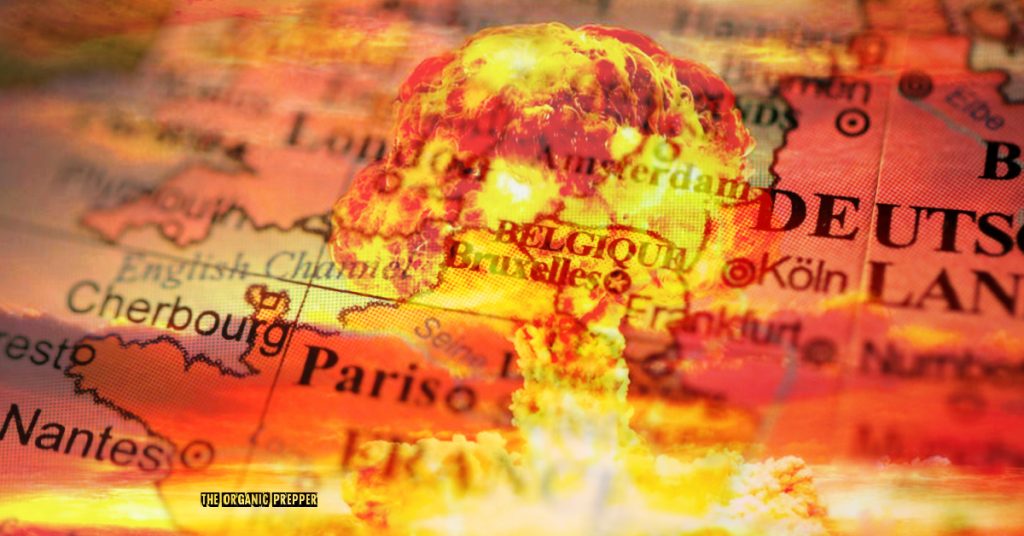 Russia is now openly discussing nuclear war in Europe. Yes, you read that right. If you’ll remember, it was only a week and a half ago that The Organic Prepper covered the work of Olga Skabeyeva, one of the chief faces in Russian media and host of the popular show news talk show Russia 1.

It was then that Russia 1 TV was saying that World War 3 has begun and that it is a fight between Russia and NATO/America.

Russia 1 is now openly discussing the possibility of nuclear war. You can see the video at this link HERE.

The translation of the interview is below.

Alexei Zhuravlev – “One Sarmat (missile) and that’s it – the British Isles are no more.”

Olga Skabeyeva – “But we are serious people.”

Zhuravlev – “And I am saying that seriously. They’re accusing us of state terrorism.”

Yevgeny Popov – “The UK also has nuclear weapons. No one will survive in this war. When you propose the strike with a Sarmat, do you understand that no one will survive? No one on the planet.”

Zhuravlev – “Since we’re talking about these weapons, the question is can they shoot it down? This missile can’t be intercepted. Their abilities are limited. They say they can shoot it down – we’ll see about that.”

Zhuravlev – “They need to be shown this picture. [Image is shown of timeline for a Sarmat missile to strike each of the European cities mentioned.] Guys, look at this picture. Count the seconds. Can you make it? [Mimics frantic movement.] Hello, it’s already here. That’s the way. Let them think about it. Get a stopwatch. Count 200 seconds. That’s how you talk to them. They don’t understand anything else.

What is a Sarmat missile?

Russia’s newest ICBM is an updated version of the Satan missile. While officially designated the RS-28, the Sarmat is commonly referred to as the Satan II. This silo-based ICBM was successfully tested by Russia just this past week, and 50 of these are allegedly under construction so far.

They have the capability to strike anywhere on the planet from their launching point and can use a number of different trajectories to do so. This is currently the heaviest ICBM in the world, having the capacity to carry up to 10 MIRVs (Multiple Independently Targetable Reentry Vehicles) – essentially “miniature” nukes that launch out of the ICBM proper.

Each of these MIRVs can be loaded with a 750-kiloton nuclear warhead, and the Satan II carries a number of countermeasures that enable it to evade/destroy enemy air defenses. According to the Russian Ministry of Defense, it is possible for a Satan II “to reliably breach any existing and future anti-ballistic missile defenses.”

In contrast, Satan II launching sites are equipped with Mozyr protection systems – a missile defense system/glorified shotgun that fires groupings of metal balls up to 3.7 miles into the sky to destroy incoming threats. All Satan II silos are capable of surviving a nuclear strike perchance the Mozyr system fails.

(Check out our free QUICKSTART Guide to better grasp the various levels of survival you need to know about.)

This news comes days after the Russian version of FEMA “accidentally” sent out a mass alert throughout Russia warning Russians to prepare for “a retaliatory nuclear strike from NATO countries.”

A retaliatory nuclear strike. You can read between the lines here, right?

According to Russia, this alert wasn’t  government-sanctioned but instead was the work of hackers who gained access to the Russian FEMA’s operating system. For the record, Russia also stated that the Moskva sunk due to a fire and that they weren’t going to invade Ukraine. Believe the hacker story if you want.

Within the message, Russians were cautioned to “independently bring the basements of their houses, as well as nearby bomb shelters, into a habitable form.” The message also told Russians to store as much long-term food, fuel, and medicines as possible.

On the heels of this, Vladimir Putin has also recently warned that a “lightning-fast” response from Russia will be the end result if the United States or NATO gets involved further in the Ukrainian War. According to Putin, “We won’t boast about it. We’ll use them [hypersonic missiles/nukes] if needed.”

(In response?) DC is now talking about sending $33 billion in aid to Ukrainian soldiers.

You need to have a game plan.

This is not fearmongering. You are sitting on the brink of war, and these things are openly being discussed. What are you doing to prepare?