Reason Is the Greatest Weapon in the Fight Against Tyranny 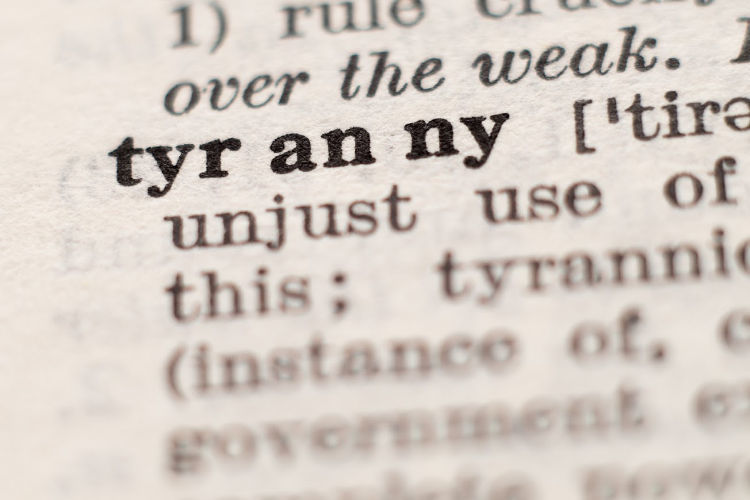 The importance of logic and accurate information in stressful times cannot be overstated.

With the gun control mess occurring in Virginia right now, there have been a lot of rumors, a lot of interpretations, and a lot of allegations from anonymous sources.

I haven’t written this to call anyone out. I’m certain that the people covering this story have honorable intentions. I’ve written this because I want to remind everyone that reason is our greatest weapon in the battle against tyranny.

What we know vs. what some guy said

I cannot confirm whether any of these current rumors circulating right now are true or not. Neither can I predict if they’ll come to pass. I try to provide balanced information based on provable sources.

Sometimes readers get angry about this and accuse me of passing on “misinformation.” It’s unfortunate they feel that it is misinformation, but I only publish what I have a source to corroborate. I might speculate but then I make sure that I’ve pointed out my thoughts are mere speculation and that there’s no evidence of this.

This doesn’t mean to completely rule out the rumors. It’s not beyond the realm of possibility that communications could be taken down in a “rebel” area. It’s important to plan for all the possibilities. But I don’t think me running a story full of suppositions and anonymous sources is actually helpful at all. I don’t want to fan the flames of an already volatile situation with things that I cannot prove.

It’s irresponsible. I won’t do it.

My goal is to help you get prepared for the things which are most likely. To do that, I have to focus on what we know.

Logic, not hysteria, will win the day.

Cooler heads are needed in situations such as these. Practical information and advice are necessary.

If you get hysterical and get all worked up about the boundless possibilities of a tyrannical state, you’re not thinking logically and that will get you nowhere good. Humans can only function at a high level of adrenaline for a certain amount of time. You’re going to crash if you keep yourself completely worked up all the time.

I’m not suggesting you underestimate the possibilities. Let me be perfectly clear when I tell you that I would not rule anything out. This is a move that has been strategically planned, as I wrote before. We must be strategic in our responses. Get organized with your family, friends, and neighbors and make sure that lacking another, yours is the voice of reason.

Work with what you know, first.

Work with the things you know, first. Then move on to other scenarios.

I urge you to sit down and make reasonable plans. Obviously you want to cover possibilities like loss of comms or loss of power, but you don’t need to go out and spend thousands of dollars on generators for this.

If you’re buying anything, focus on alternative communications that cannot be taken down as easily as cellphone towers and phone lines. Alternate communications devices much better options than going out and blowing the bank account on a generator that would only be valuable for a week or two, depending on how much fuel you can store. We bloggers all need to make a living and cover our costs, of course, and there’s nothing wrong with an affiliate link here and there. But be wary of any breathless story that urges you to spend thousands of dollars based on hearsay.

Think about the things that are most likely, and plan for those first. If you’ve been prepping for a while you’ll probably find you are ready for a lot of it but that you may need to fill some holes.

If you lost power, isn’t this one of the major reasons you prep? Sure, it would be inconvenient and even unpleasant, but ask anyone from California if it’s absolutely the end of the world. Check your preps and make sure you have what you need on hand. (If you feel unprepared for a lengthy power outage, this PDF guide can help and I marked it down to $5.)

Communication is likely to be one of those holes. Satellite phones are painfully expensive, but CB radios, ham radio, and even walkie talkies for nearby neighbors are all affordable investments that could be used in a variety of circumstances, not just this one.

Remember, we are resilient enough that a few days of inconveniences will not take us down.

You have the power here.

Should a worst-case-scenario occur, it’s only as powerful as you allow it to be.

Let’s imagine, for example, the rumor about the Governor wiping out power and comms is true. If you move flawlessly over to your backup plan, the state government has made themselves seem like tyrants in front of the country and the world and you are minimally affected.

Regardless of the situation, reacting calmly and methodically is always going to be better than losing your ever-lovin’ mind and rushing around in a panic. Panic kills, whether the situation is slow-moving like this one or fast-moving, like an immediate life-and-death scenario.

This is a prime example of prepping versus survival. You have time – this law will not go through (if it does pass) until January. Meanwhile, don’t spend the next month in a blind frenzy based on what you see on websites or forums. Take it all into consideration but for cryin’ out loud, keep your s**t together.

Did you ever think these scare tactics might be leaked deliberately?

Has it crossed your mind that rooting these seeds of fear might be deliberate? Of course, an enemy would want to see you discombobulated – this is classic Art of War stuff. If you feel under attack already, you’re going to have worn yourself out by the time things have actually come to fruition.

By no means am I suggesting that you do not take the treasonous threats against the Second Amendment seriously. I’m not suggesting you overlook the potential ramifications of the anti-paramilitary bill and its vague wording. It would be bad for militias but in its current incarnation, I don’t think it’s as far-reaching as banning instruction on the use of guns or self-defense. This isn’t to say that it couldn’t be one day used for that, but at this point, I think the purpose of that bill is to strike down opposition to the gun bill.

Think about it: If you were in a position of power and you wanted to have your “enemy” scrambling, wouldn’t a deliberate “leak” of an extreme scenario be a good tool for this purpose?

Again, this isn’t to say it couldn’t happen or won’t happen. I’m saying, think it through entirely. What is practical and likely? What is so extreme it would cause censure from the rest of the nation?

The government absolutely did a lot of bad stuff in Waco and Ruby Ridge, but that was small-scale, comparatively. We’re talking about nearly an entire state here. That would be an encroachment on such a massive scale that there’d be an outcry. The President could – and probably would – take over the National Guard in a situation like this.

I don’t know if you’ve ever dealt with a narcissist, but they glory in getting a response from people. They feed off it. If they aren’t getting the response they need, they will strive to unsettle and scare their victims until they do.

Don’t let people get in your head. Reason is the enemy of tyranny. A panicking person cannot strategize effectively. The decision-making part of your brain literally shuts down when you panic.

Be calm and methodical.

This stuff is huge and it could be the start of a dark era for our country. This has the potential to change everything our Republic has stood for since it existed.

But fear and hysteria have no place in your preparations. Please consider your sources and don’t base your actions on “maybes” and “this guy said” scenarios. Preparing for the possibilities in a calm and methodical way will help you through whatever may come far more than preparing in a state of panic.