A No-Fly Zone Over Ukraine WILL Lead to WW3 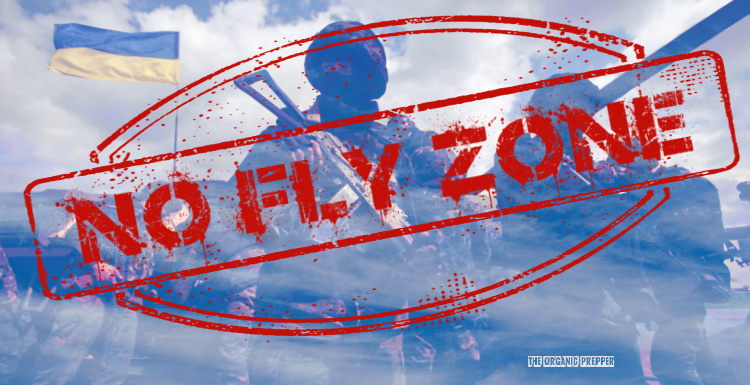 If there’s one thing we know, it’s that the mainstream media can tell you one thing one day and immediately flip their position a day later. I find it concerning that we see articles trickle in advocating for a no-fly zone over Ukraine.

If you’ll remember, over the course of recent history, there have been plenty of times where the small fringe voices within the mainstream media initially touted ideas that everybody thought was ridiculous, and then these ideas gained momentum and steam over time with more and more people adopting what was once considered idiotic.

You could very well see the same thing take place with this talk of the institution of a no-fly zone.

To start it off, Ukraine’s Zelensky has repeatedly called for foreign countries to send their men, munitions, and fighter jets to the region to create a no-fly zone over his country.

The Washington Post recently posted an opinion piece titled “Want to help Ukraine? Close the sky.” Within the piece, it’s argued that toddlers and babies will not receive the food, blankets, and medical supplies they need to stay alive and that children will suffer psychological trauma unless America incorporates a no-fly zone over Ukraine.

Just the other day, we had 27 foreign policy “experts” send a letter to DC lobbying for a no-fly zone over Ukraine. Within their letter, they stated, “NATO leaders should convey to Russian officials that they do not seek direct confrontation with Russia forces, but they must also make clear that they will not countenance Russian attacks on civilian areas.”

The point is, there are a growing number of people out there who are advocating for America to get involved in this.

Sean Hannity wants us to bomb Russian convoys, Facebook now permits talking about committing acts of violence against Russians, and others are pushing similar policies.

A no-fly zone means that NATO wouldn’t let any Russian planes fly over Ukraine. How is this enforced? With jets, missiles, and anti-aircraft guns. This means that if a Russian jet were to fly over Ukrainian soil, NATO (aka The United States) would shoot that jet down.

What is Russia’s stance on a no-fly zone?

As you can probably imagine, if you threaten another country, they’re not going to be very happy about it. What are Russia’s stated responses to threats of a no-fly zone being placed over Ukraine?

For starters, Russian Defense Ministry Spokesman Igor Knoashenkov has said that anybody who offers their airfields to assist Ukraine to carry out attacks will have been considered as having joined the war. So, if NATO (aka, American) jets launch out of Poland to shoot Russian jets out of the sky over Ukraine, Poland will be viewed as fair game by Russia.

This is how war spreads.

In addition to this, Putin stated on February 24 that “Whoever tries to hinder us, or threaten our country or our people, should know that Russia’s response will be immediate and will lead you to consequences that you have never faced in your history.”

So, not only would Poland be fair game if this were to take place, but the United States would as well.

What are the consequences of a no-fly zone?

It’s comforting to know that we have people that are willing to support actions that will lead to open conventional warfare with a nuclear power.

As you have probably already deduced by now, the consequences of a no-fly zone are nothing short of world war. A no-fly zone is nothing other than a euphemism for “conventional war.” Do you know what that white crap is on top of chicken crap? More chicken crap. It doesn’t matter how you wrap it and what color bow you put on it; to incorporate a no-fly zone is to declare war with Russia and to start conventional warfare between two world superpowers.

If this were to take place, keep in mind that A) war often spreads, and B) war escalates. There are a lot of nations out there who hate America and would view this as the perfect justification to push through a lot of violence against you and your family. Russia has friends that would happily join its side to fight against us. War often spreads.

People are always looking for an edge over their enemy, and this is how new weaponry is created and used.

Am I anti-war or anti-weapons? Not even close. There’s a time for war. But if you’re arguing that this is what we need to do, you’re talking about dragging my family into World War 3 with a nuclear-capable nation that has nuclear-capable bombers stationed in Venezuela.

If you want to play stupid games and win stupid prizes, do so on your own time and at your own risk. Don’t put my family at risk as well. Because if you’re arguing for a no-fly zone over Ukraine, that’s exactly what you’re doing.

Do you think a no-fly zone would set off World War 3? Do you think it would go unanswered? Do you think the United States should step in? Share your thoughts in the comments.