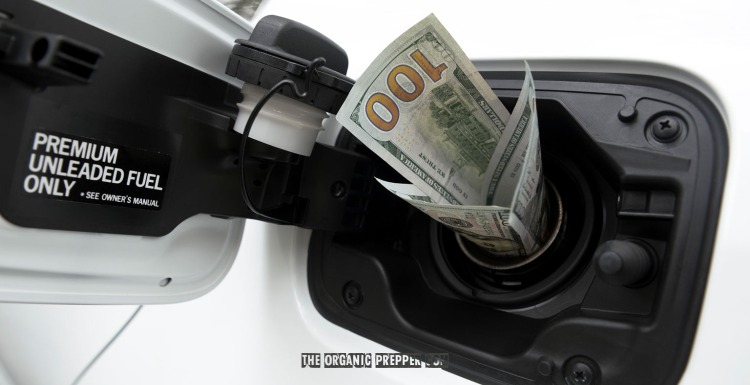 by the author of The Faithful Prepper and Zombie Choices.

Last week my neighbor cautioned me that I needed to fill up with gas that night. “I’m friends with the owner of the gas station. He’s bumping up prices 30 cents per gallon tonight,” my neighbor told me. I filled up and woke the next morning to find that gas was $2.90/gallon. He was right. Gas was $2.60 the day prior. Rising gas prices were escalating.

As of yesterday, gas was selling for $4.30/gallon in my area. It had jumped well over a dollar per gallon in less than seven days. And it is only going to continue to go higher.

Though Russian oil only accounted for 10% of all the oil that Americans utilize, we are now officially no longer importing Russian oil. Instead, we’re looking at getting our gas from Iran and Venezuela.

Yes, you read that right. Iran and Venezuela.

Iran, the same nation where generals say, “Death to America,” and burn the flag in Parliament.

Venezuela, the same land that brought in nuclear-capable bombers from Russia a few years ago, that received shipments of Russian military equipment, and that moved troops to the Colombian border in 2022 with Russian assistance.

It bugs me that this kind of stuff doesn’t surprise me anymore. No matter that the United States could literally drill all the oil that we would ever need. We’re being told we have to do deals with our enemies now instead.

If we avoid looking at the questions of national security this poses, what can we see about how this is going to impact your prices at the local grocery store?

Let’s start with looking at how rising gas prices hurts the farmer.

On average, a tractor runs somewhere around 13-17mpg. All the tractors I’ve ever seen run off of diesel. As of this writing, diesel is running right around $4.85 on average throughout the country. Personally, I’m seeing it at well over $5.00/gallon in my area, but we’ll stick to the national average for the sake of “fairness.”

Let’s say I’m a cattle rancher growing my own hay.

I have a couple of acres of it. I grow and bale myself to feed my cows throughout the winter, and I have to sit on that tractor for 20 hours to get all of my hay cut, raked, baled, and hauled out of those fields. Let’s say my tractor burns through 13.6 gallons/hour.

By the time I get all that hay in my barns, I’ll have used 272 gallons of diesel. If diesel costs me $4.85 on average, that means I just paid $1319.20 on my diesel to get my hay in the barn. That’s not counting the cost of my time, the wear and tear on my tractor, my baling twine, or the guys I had to pay to help me get everything taken care of before the rain. Last year it cost me half that to get my hay put away.

(It’s a good time to read our free QUICKSTART Guide on how to build your 3-layer food storage plan. I’d suggest reading our nuclear war survival anthology as well.)

Is the farmer going to simply absorb that cost, or is he going to pass that cost on to the consumer? As Adam Smith has pointed out, the way this works is that the cost gets passed on down the chain until it reaches the customer.

But it’s not just the cost of running a tractor in a field that’s gotten more expensive. It’s every other aspect of the food supply chain. Those groceries that were delivered to your local grocery store? They were delivered via semi-trucks that also run off diesel. Therefore, if it now costs the trucker an additional $1000 to deliver a load full of product, the rates he’s going to charge are going to go up.

If he’s running a refrigerated truck and it costs the freon man more money to deliver freon, the price to keep the truck refrigerated is going to go up. So, if the food has to be stored at a countywide distribution center before it eventually makes its way to the grocery stores of the region, there’s going to be an increase in price to keep the food refrigerated and then trucked out once more till it reaches the end destination.

These price increases get passed on to you.

And finally, when the food reaches the grocery store, the grocer is going to have to bump his prices up to atone for all of the added costs it now takes for him to get food onto his shelves.

The bottom line is that the ever-increasing price of gasoline, the continued refusal to drill our own oil, and the continued oil embargos we keep creating are only going to cost you, the American, more and more to keep your own family fed.

Do what you can now to mitigate the effects of rising gas prices on your family.

If you don’t already have a fully stocked larder in place, now is the time to start working on it. Figure out ways to stay entertained at home that doesn’t require your driving about town. Call, send emails, and write letters to your legislators telling them the reasons all of this is idiotic. Go to your town meetings and speak. Top off your vehicle regularly (nightly?) to avoid paying more for gas tomorrow. Look at keeping gasoline in 5-gallon cans in your shed/barn with Sta-bil (a wonderful chemical I learned about from reading James Wesley Rawles) added to keep it functional longer.

Rising gas prices are only going to get worse. Prices across the board are going to go up. Do what you can now to prevent the impacts of this on your family.

How much is gas in your area?

How much are you paying right now? Let us know in the comments, along with the state. How much does it cost to fill your tank right now? Are you doing anything differently to conserve or prepare? Let’s discuss it.