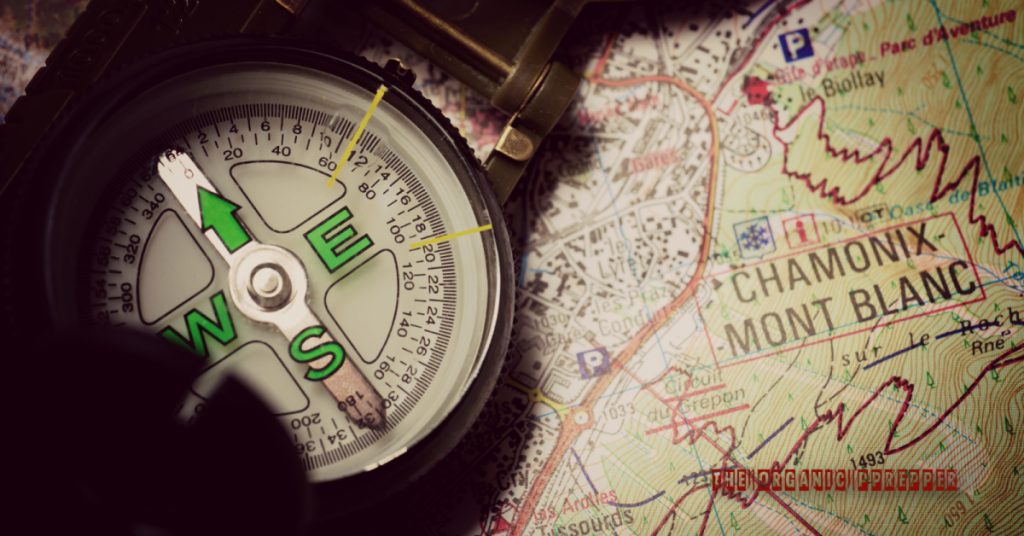 There are many ways to navigate, but for survival and true self-reliance, an excellent skill to have is the knowledge of how to shoot an azimuth using a compass and a map. First, for those who may not know that term, using a compass in the navigation process is known as shooting an azimuth. The term ‘azimuth’ is nothing more than a fancy way of saying, “This is the way I need to go.”

And, who doesn’t love maps? For many, maps symbolize adventure, and the planning process grasps people’s interest the world over. Within a disaster situation, maps become extremely valuable. Maps can help tell you where you are, where you need to go, and how to get there.

So, how do you utilize a compass and a map to determine the way from Point A to Point B?

Let’s take a closer look how to shoot an azimuth below.

The supplies you will need

You need five pieces of gear to shoot an azimuth using the method I’m going to show you:

Now, let’s go on an adventure

You’re a brave knight residing at your survival fortress. Your fair maiden has gone off on a shopping trip across the mountains to look for a pair of shoes to match her new crown. While she’s away from you, the SHTF. Thankfully, a friendly fairy swings by to inform you of a tragic wolf attack at the shopping center, and your maiden needs rescuing. You grab your gear and break out your trusty map. Steeps mountains are no hindrance to you and your magical running shoes.

First: plot a line from Point A (your position) to Point B (Thy Fair Maiden). Use your straight edge and your pencil to do this on your map. It’s best to draw the line past both points to make it easier to determine the degree of your azimuth.

Next: get out the military protractor. 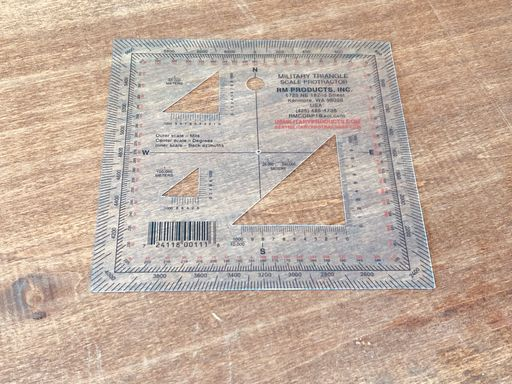 There are several different protractors available, but the ones I like to use look like the one above. When you place it on a map, it becomes much easier to read the markings. Just make sure you have it flipped the correct way! 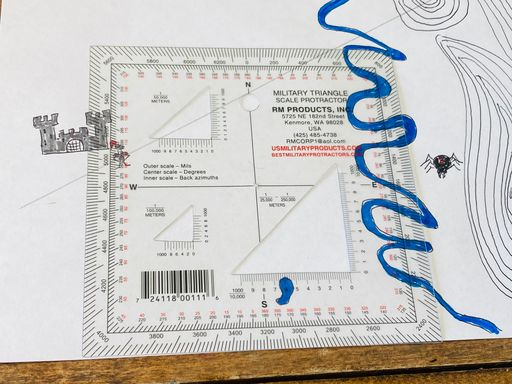 Note: On your topographic map, you’ll notice a grid pattern overlaid over the entire map. The grid pattern is present so you can determine the GPS coordinates of any location on the map. We’re more concerned right now with how to plot an azimuth, so we know which is the correct way to travel.

**Let’s pretend the corners of my paper map here are part of the map grid that you have on your topo map in front of you.

Lay your military protractor along these grid lines, ensuring you don’t have it cockeyed at some strange angle. The protractor must perfectly align with the map. Notice on my map, the center of the crosshairs line up with the plotline that I drew. That’s is precisely what you want. Do you see how the line extends past the edge of the protractor? One of those sets of numbers along the edge will tell me the compass degree I need for my azimuth.

What trips a lot of people up here is that there are two sets of numbers. If you were in the military calling in an artillery strike, you would be using the outermost set of numbers, where the 1000 and 1200 markings are. The angle there is measured in ‘mils.’ We’re not concerned with mils. Ignore the outermost markings. (Some people cut off the outer markings to eliminate any potential confusion.)

What we want are degrees. To measure, you want the inner markings. You can see in the image above the angle of travel is right in between 60 and 61 degrees. For training purposes here, we’ll assume that this is 60 degrees.

You want to remember that number.

Now, it’s time to use the compass 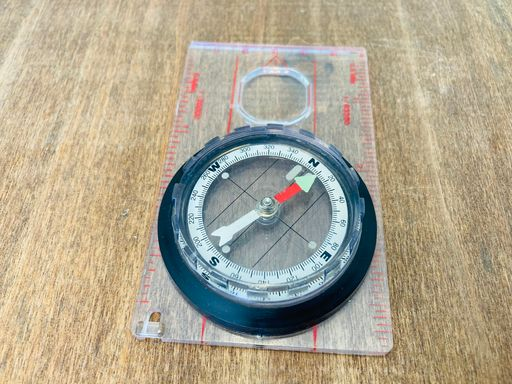 Place the compass on your map. I have my compass oriented along the grid north of the map, which means the top edge of the map and the compass placement all point the same way.

The process will involve a lot more markings, but the image above gives you the general idea. The outer circle with the star tells you the direction of true north on your map. The inner circle (that’s likely canted) tells you the direction towards magnetic north. In our case here, you can see that the magnetic north is 10 degrees to the right of true north.

You will need that information to plot a better azimuth.

Time to make accommodations when plotting

According to the protractor, we need to plot a point of 60 degrees from true north to get to the Fair Maiden. However, the compass doesn’t point to true north. It points to magnetic north. If we follow a 60-degree azimuth from magnetic north, we will end up far off to the right of where the Fair Maiden is. Therefore, we must accommodate for this when plotting the azimuth.

To do this, take the protractor reading (60 degrees) and subtract the 10 degrees that magnetic north requires. The result is 50 degrees.

That’s the bearing to follow to get straight to the Fair Maiden.

Tip: Here is an easy way to remember this I learned from NC Scout at American Partisan. Anytime you’re going from General (grid north) to Major (magnetic north), you get a demotion (meaning you subtract). If you’re going from Major (magnetic north) to General (grid north), you get a promotion (meaning you add).

In this example, you see the knight is traveling right over a mountain range.

In real life, that would be brutal. Imagine hiking straight up the sides of two different mountains. In many cases, it may be downright impossible (cliffs and such). A more realistic pathway for our knight would be to go through the valleys to the south of the first mountain to get to the Fair Maiden.

Doing so would require additional map plotting and azimuth shooting. Even though this requires a further distance traveled on the map, it actually equals a more accessible and safer pathway to the end goal. Chances are you would have to do the same thing when shooting an azimuth in the woods.

Ready to shoot an azimuth for your own adventure?

I highly recommend picking up a copy of the Army’s field manual on the subject, FM 3-25.26. Also known as Map Reading and Land Navigation. This book goes into greater detail on how to use a compass, maps, and military protractor.

And that’s how you plot an azimuth to follow with your map, protractor, and compass! What are your thoughts on the subject? Are there other tips and tricks you think others should know? Let us know in the comments below! 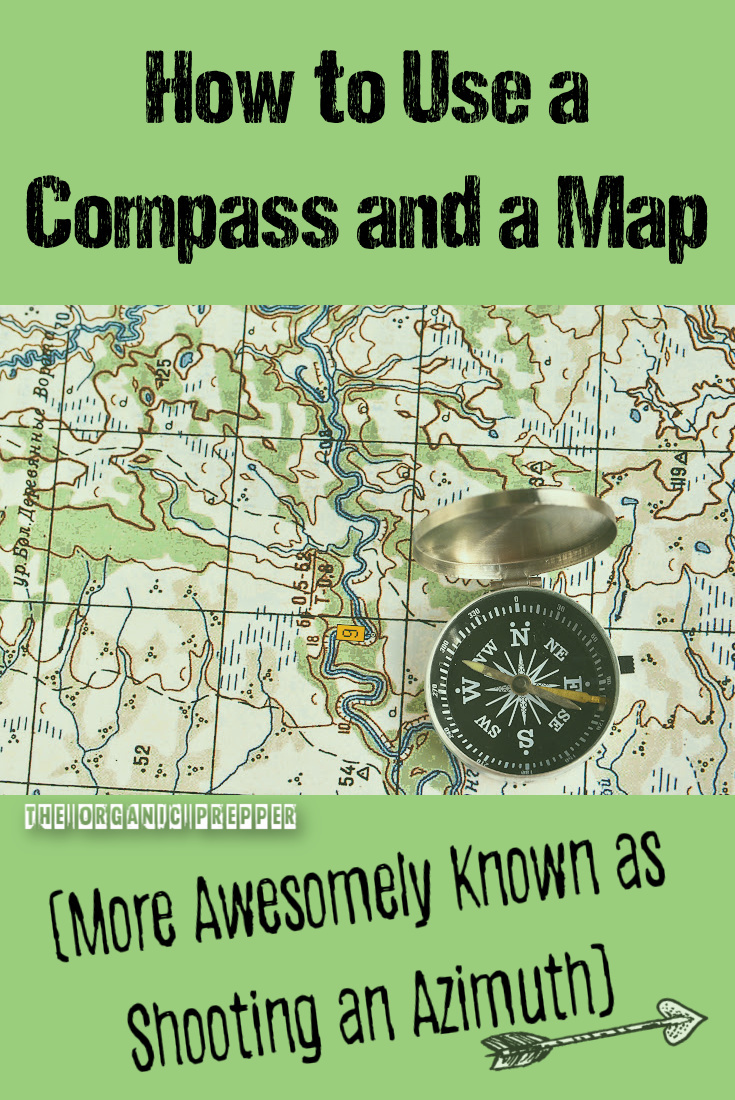