Ebola Goes Urban: WHO Warns of “Potential for EXPLOSIVE INCREASE” 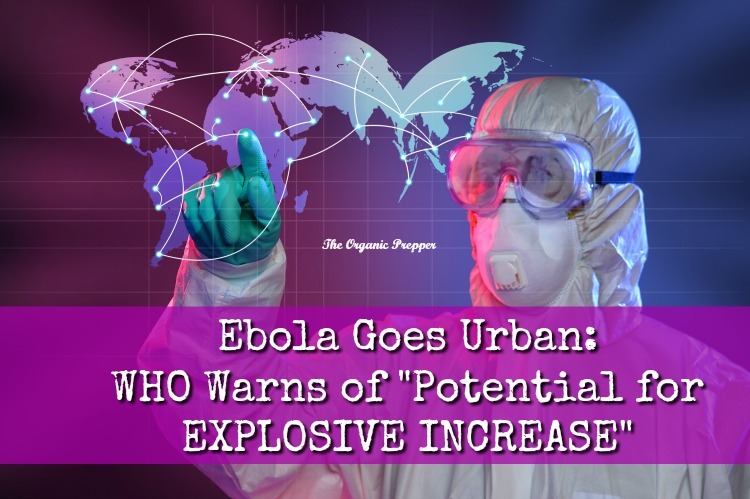 Ebola is back, and in a “new phase.” The deadly hemorrhagic fever is no longer confined to the remote regions of the Congo. On Wednesday, a man was diagnosed in Mbandaka, a city with a population of nearly 1.2 million people in Equateur Province, which is in the northwestern part of the Democratic Republic of Congo.

And that means the real crisis is just beginning.

The World Health Organization is worried.

Now Ebola is back in the Congo, and this new outbreak has the World Health Organization very concerned. Initially, the outbreak was in a remote area and the health officials were attempting to “ring-fence” with vaccinations. But now that it has reached the populous Mbandaka, that plan is no longer viable. The other issue is that Mbandaka is a major transportation hub, with routes to the capital city of Kinshasa.

The health ministry reports that  44 cases of Ebola have now been reported, from which 23 people have died. But this case that has been diagnosed in an urban area could change everything.

“The arrival of Ebola in an urban area is very concerning and WHO and partners are working together to rapidly scale up the search for all contacts of the confirmed case in the Mbandaka area,” said Dr. Matshidiso Moeti, WHO Regional Director for Africa. (source)

Peter Salama of the World Health Organization is more candid.

“This is a major development in the outbreak,” he told the BBC. “We have urban Ebola, which is a very different animal from rural Ebola. The potential for an explosive increase in cases is now there.”

Mr Salama, the WHO’s Deputy Director-General of Emergency Preparedness and Response, said Mbandaka’s location on the Congo river, widely used for transportation, raised the prospect of Ebola spreading to surrounding countries such as Congo-Brazzaville and the Central African Republic as well as downstream to Kinshasa, a city of 10 million people.

“This puts a whole different lens on this outbreak and gives us increased urgency to move very quickly into Mbandaka to stop this new first sign of transmission,” he said. (source)

The virus may have gotten to the city when people who had gone to the funeral of an Ebola victim nearby traveled to Mbandaka before realizing one of them was infected.

A quick recap of the outbreak of 2014

Everyone remembers the Ebola outbreak of 2014. It ripped through West Africa for two years, killing over 11,000 people and sickening nearly 30,000. But the reason WE remember it in the United States is that it crept into our country. Shortly after the CDC warned us to prepare for a potential Ebola pandemic, the first case was diagnosed in Dallas, Texas, when a man from West Africa visited the hospital on two occasions, having been turned away the first time as just having “the flu.” The original patient died, and two nurses caring for him caught the potentially deadly virus.

It is honestly shocking that more people didn’t become ill, as one nurse traveled on a plane while sick, and in another incident, a doctor in New York City who had volunteered in Guinea was also diagnosed. All in all, eleven people in the United States were treated for Ebola (that we know of, anyway) and it certainly wasn’t because of the expert handling of the near-crisis. It was pure luck.

There were all sorts of mismanagement. Everything from not requiring a quarantine of travelers returning from the affected area to housing 11 potential cases in a hotel to a ship from Liberia with sick passengers being allowed to dock in New Orleans to the near-disastrous handling of contaminated samples in Dallas, it is an absolute miracle that there was no major outbreak in the US. Will we get this lucky twice?

Should we be worried now?

At this point, we have no reason to be overly concerned if we are not in the DRC, however, it pays to be watchful and prepared. The last time around, it made it to the United States and it was nearly impossible to get supplies by the time it was diagnosed here.

From a preparedness point of view, if an outbreak occurs, social isolation is the number one way to prevent becoming ill. The death rate for someone who contracts Ebola is 50%. Ebola is the potential pandemic that really keeps me up at night. It’s scary stuff. This article explains how a localized outbreak can turn into a pandemic.

Smart people will check their supplies to be certain they’re prepared for the possibility of hunkering down for a couple of months or more, that they have personal protective equipment on hand. To learn more about preparing for a pandemic, read this article and get this book. Remember that when the official government warning goes out, it’s going to be too late to acquire the things you need.