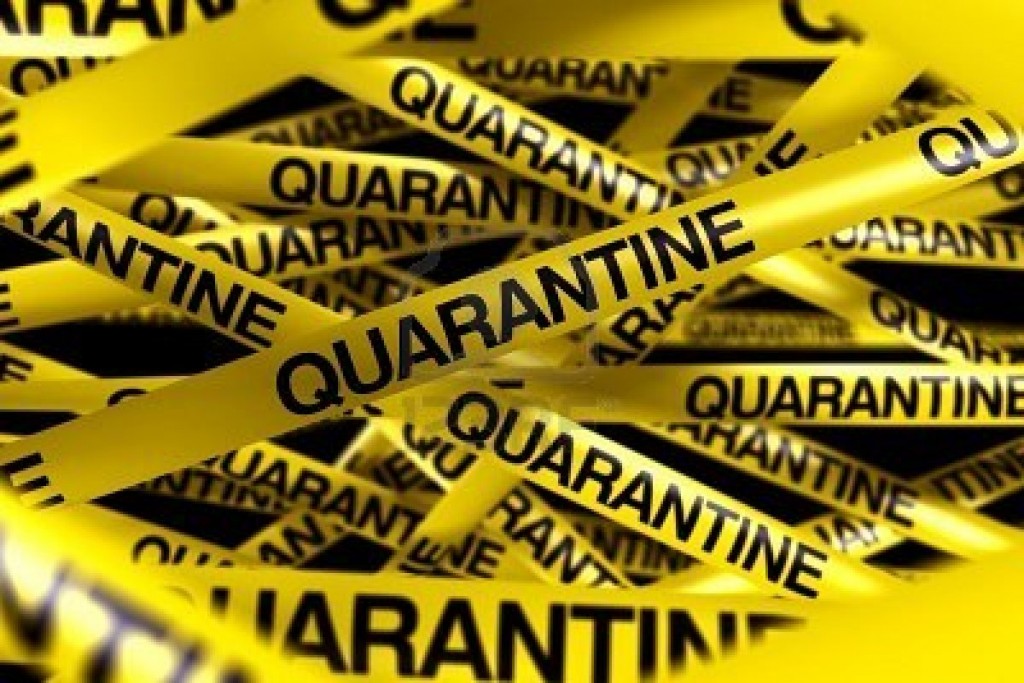 A man in Texas who is thought to be infected with Ebola may be taken into custody against his will.  Is this the beginning of medical martial law, or is this a common sense practice to prevent the spread of a deadly disease?

Thus far, due to medical privacy laws, the man is unnamed.

Texas wants a second patient “reasonably suspected of being infected” with Ebola put into protective custody in Dallas.

Dr. David L. Lakey, commissioner of the Texas Department of State Health Services, filed a motion for a temporary order of protective custody Monday in Dallas County Court.  The unidentified patient, sued as “M.W.L.,” is “reasonably suspected of being infected with a communicable disease (Ebola) that presents an immediate threat to public health,” the 4-page motion states.

“Further, movant has determined that proposed patient is a threat to himself or others if not immediately restrained. Further, sources charged with monitoring the proposed patient M.W.L. have observed the proposed patient failing or refusing to follow the written order of the Texas Department of State Health Services by leaving the premises of a medical facility contrary to medical directives, without permission and surreptitiously.”

Lakey claims that the proposed patient “meets the criteria authorized by the court” to issue such an order. “The sworn representations of the applicant, who is a credible person, state that the proposed patient is reasonably suspected of being infected with the communicable disease, Ebola, that presents a threat to public health; has failed or refused to follow the written or verbal orders of the Commissioner; and presents a substantial risk of harm to himself or others if no immediately restrained,” according to the motion, filed Monday at 2 p.m.

So here’s the conundrum.

I’m all about liberty. I’m a hardcore libertarian who believes that the state should not have authority over my day-to-day activities.

Do we really want people with a gruesome, deadly, infectious disease running around willy-nilly; touching things; potentially vomiting, coughing, sneezing, and bleeding out of assorted orifices; and contaminating sundry doorknobs, public transit, and gathering places? I’m not saying that this M.W.L. fellow has any intention of deliberately making people sick, but still. Is this actually a horrible thing?

I know the headlines are going to be all over the place, calling this “medical martial law”. It’s inevitable, because we are all very protective our our personal liberties.

But…how is it that some of the people who are the most up in arms about illegal immigrants being potential sources of disease, and about US Customs’ complete disregard of health protocols at international airports are the same people who are screaming about this being unacceptable?

You can’t have it both ways.

The Ebola situation in the US has been handled HORRIBLY thus far. As my friends at Truthstream Media said, it’s like a badly written horror film.  You just want to grab those in charge and shake some sense into them. “No!  Don’t go into that dark forest to investigate the noise. RUN!!!!”

Is it really unreasonable to insist that those exposed to Ebola remain at home? Personally, I can’t understand why someone who might be ill with Ebola would want to risk contributing to the start of a horrible pandemic, but for those who don’t take personal responsibility for that sort of thing, is it really a bad thing for them to chill out at home until they’re clear?

Here’s where the slippery slope part comes in.

But I also would not leave my house if I was ill with what “might” be Ebola. I would take the responsibility of isolating myself so that I didn’t make others sick. Or alternatively, I’d cover up and go to the hospital in order to be isolated.  Heck, if I even think it’s in my city, I’ll lock down preventatively.

This may make me none-too-popular, but I just can’t think it’s okay for those who are showing symptoms of Ebola to be allowed to wander around the city. We expect officials to perform medical checks and quarantine people at the border.  We expect hospitals to immediately admit people who could be ill and we chastise them for doing stupid stuff …you know, like sending away Thomas Duncan.  Keeping people who are potentially ill and contagious isolated IS NOT a bad thing. Forcing them to undergo medical treatment or exposing them to other sick people IS a bad thing.

Melissa Melton of the Daily Sheeple agrees that preventative actions should be taken to contain a potential pandemic outbreak:

How about this? How about if someone has even been in those countries, they have to wait 21 days before coming here in a preventative quarantine? I’m certainly not for martial law or taking away anyone’s rights, but at this point if they show up here with Ebola, the CDC will quarantine them and take away their rights anyway, as we are now seeing with Duncan’s family members in Dallas who are on a 21-day control order that forces them to stay inside and make themselves available for any and all medical tests public health officials deem necessary on demand, or they will face criminal charges.So, either way, rights are not being upheld. Might as well not put a bunch of other people in mortal danger while we are already on the slip ‘n slide straight to global pandemic land.

So how can we also criticize them for isolating someone who might potentially spread the disease to thousands? I’m not advocating forcible medical treatment, but I don’t think it’s wrong to quarantine a person showing all of the signs of a deadly illness. This is not “medical martial law”. It’s common sense.  Who can honestly say it’s okay for people to go around spreading a horrific bloody plague? When people refuse to act like responsible human beings and put others in harm’s way, it ceases to become an issue of personal liberty and turns into an issue of potential criminal negligence.

I know opinions will vary greatly on this. So…weigh in.  Should a person showing the signs of Ebola be allowed to go on their merry way, potentially infecting others? Should they be required to stay home under mandatory quarantine? Where do we draw the line?

Updated: Prepping for an Ebola Lockdown

Sealing Yourself In: Prepping for Bioterrorism, Chemical Disasters, and Pandemics (The NEW Survival Prepper Guides Book 3)