11 People with “Potential Exposure” to Ebola Being Brought to American…ummm…Hotels??? 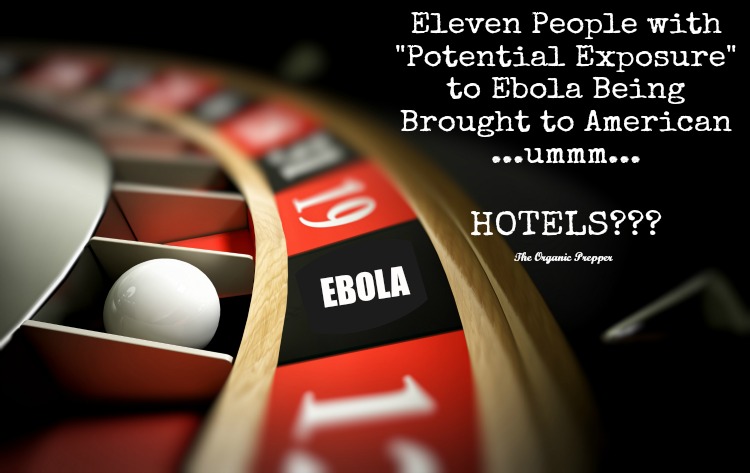 It looks like we’re gearing up for Round 2 of Ebola Roulette.

They aren’t being hospitalized. Oh no.  They are being brought back to stay at hotels “near” three different hospitals in different regions of the country. I couldn’t make this up if I tried. Read this excerpt from a report by CNN and weep.

[content_container max_width=’500′ align=’center’]”(The) CDC and the State Department are facilitating the return of additional American citizens who had potential exposure to the index patient or exposures similar to those that resulted in the infection of the index patient,” the CDC said in a written statement.

The CDC said none of these individuals returning from Africa has been diagnosed as having Ebola, including one who had “potential exposure to the individual being treated at NIH” and was “transported via charter to the Atlanta area to be close to Emory University Hospital” on Friday. That person is voluntarily self-isolating and will be monitored over the 21-day incubation period, the CDC said.

Four people who had “more exposure than the others” to the patient with Ebola will isolate themselves in housing on the campus of the University of Nebraska Medical Center, said Nebraska Medicine spokesman Taylor Wilson. They arrived on the medical campus Saturday evening, Wilson said.

The other six are scheduled to fly into Washington on Sunday to go to the NIH, and into Atlanta on Monday to go to Emory, Skinner said.

Skinner said the Americans coming home will stay at hotels and other housing near the University of Nebraska Medical Center in Omaha, the National Institutes of Health in Maryland or Emory University Hospital in Atlanta.[/content_container]

Let me repeat that one very important sentence:

[content_container max_width=’500′ align=’center’]…the Americans coming home will stay at hotels and other housing near the University of Nebraska Medical Center in Omaha, the National Institutes of Health in Maryland or Emory University Hospital in Atlanta.[/content_container]

I realize the points above sound facetious, but why in the name of all things cute and fluffy aren’t these people being isolated in a health care facility? ELEVEN people in THREE different parts of the country. It’s like those in charge are trying to give the disease the best possible chance to spread across the country.

I should have taken a screen shot of the article on CNN, because they’ve changed it to remove the part about the victims staying in hotels and switched the word to housing. However, I found mention of the hotel stays on two other outlets and DID take screenshots of this.  Click to enlarge them.

This one is reposted from CNN on Channel 13 news in Iowa.

Who can forget the events of last October and November, when only dumb luck kept the hemorrhagic illness from being unleashed on our country?

Last fall, experts from the CDC (Center for Disease Control) and the WHO (World Health Organization) received a great deal of criticism for how they handled the potential Ebola crisis. First, a man visited a Texas hospital twice before being admitted with the disease. Then protocols (actually, what protocols? read this horrifying timeline!) were questioned after two of the nurses caring for the man before he died also contracted Ebola. The hospital was so overwhelmed that one case of Ebola shut down an entire emergency room. One of the nurses flew across the country twice before she became ill, expanding potential exposure exponentially. Hundreds of people showed up to hospitals convinced they had the disease after the government deliberately brought health-care professionals who had contracted the illness in disease-stricken Sierra Leone back to the US for treatment. Yet another health care professional wandered around New York City, taking public transit and going bowling the day before he was admitted to the hospital and diagnosed with Ebola. Several stories about Ebola were literally scrubbed from the internet as officials tried to cover up their mishandling of the situation.

Let’s hope that medical personnel are better trained this time around, and that the proper protective equipment is available to caregivers.

How to prep if you’re concerned…

When it looked like the disease was going to be unleashed on our country last time around, I wrote up some lists to help folks get prepared for the possibility of a pandemic.

You should calmly and rationally take some steps to be prepared in the event that an outbreak begins here in the United States. I wrote about this in great detail last year and you can find that information right here, in an article called “Prepping for an Ebola Lockdown.”  Last time around, supplies went quickly, so it’s better to get ahead of the curve.  Check your supplies against this list, and order the things you need now. If these other people are diagnosed after spending time in public places, ordering supplies then will be much like running to the grocery store right before a storm hits. Everyone else will have the same idea and the shelves will be emptied in a panic.

Here’s a quick checklist along with some links to resources.  Base amounts on the number of family members you’ll be sheltering.

Note – we do not commonly use anti-bacterial products but in a situation like this, it’s important to have this type of thing on hand, particularly in the event that there are issues with sanitation

Here are some useful links if you are new to prepping:

Again, please don’t read this and panic. At this point, there is NO pandemic in the US.  It seems that some careless actions are taking place and that preparation well before the storm, is, as always, the best course of action for a wise prepper.