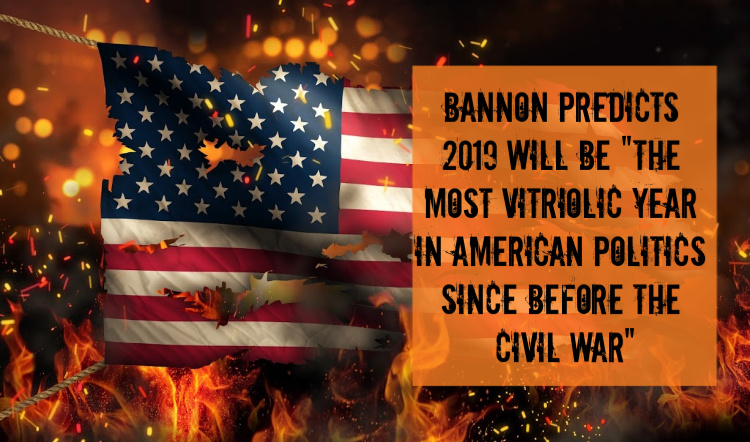 Who can forget the hostility during the 2016 election? The battle between Hillary Clinton and Donald Trump caused the ends of friendships, strained family relationships, and set the tone for an angry new “normal” in the United States. And Steve Bannon, who was in the thick of the fray, predicts that this next election will be even worse … and that the problems will start this year, in 2019.

If you’re not familiar with Bannon, he was formerly the executive chairman of Breitbart News, a conservative news website (and many say it’s not just conservative, but alt-right.) During the last election, Bannon left Breitbart to take on the role of chief executive of the Trump campaign. That role evolved into the position of chief strategist and senior counselor of the newly elected president.

Before we get any deeper into the article, let me preface it with the fact that I’m neither a Republican nor a Democrat. I was not satisfied with any of the candidates put forth during the previous election.  However, when Trump won, I vowed to cover all news about him fairly.

This article isn’t really about politics, though. It’s about people.

The previous election saw Democrats and Republicans turn up the heat to an extent not seen in recent history. And the advent of social media made it so that you couldn’t get away from the opinions of your friends, family members, and coworkers.

People passionately defended their chosen candidate and just as passionately bashed the opponent of their candidate. The 2016 election saw the releases of private emails from the Clinton campaign by Wikileaks, which were voraciously read by Clinton opponents and dismissed altogether by her supporters.  Scandal after scandal was released about both candidates and the term “fake news” was coined.

The election itself was a complete shock to many, myself included. I had fully expected to see Hillary Clinton win. The results had many calling for the end of the electoral college.

The heat didn’t die down after Trump was elected. The days following the election were filled with riots, shock, and even schools canceling classes.

The United States has been harshly split down party lines ever since.

Steve Bannon says the next election will be even worse.

As bad as the previous election was for the morale of our country, Steve Bannon believes that the 2020 election will be even worse. He voiced his thoughts during an interview with CBS.

“I think that 2019 is going to be the most vitriolic year in American politics since before the Civil War,” Bannon said in an interview with CBS News correspondent Seth Doane on Saturday. “And I include Vietnam in that. I think we’re in, I think we’re in for a very nasty 2019…

…I think the next 90 days to four months is going to be a real meat grinder … I mean, the pressure on the president is coming from many different angles,” he said, adding later, “I think you’ve already seen it from what the Democrats, some of these reports they’ve been dropping here without telling anybody. I think that now they control the House they can weaponize this, they could weaponize the Mueller report.” (source)

And he doesn’t expect the challenges to only come from the Democrats, either.

In the interview, Bannon also predicted that Trump will not only run again but will win by an even bigger margin than he did in the last election. You can read more from the interview here.

The last election changed everything.

Whether you love Bannon, hate Bannon, or really don’t give two hoots about Bannon, his prediction is pretty alarming. And it rings true.

In my entire life, I do not recall seeing political hostility at the level of the last election. Sure, a lot of conservatives were very unhappy when President Obama was elected. Of course, a lot of liberals were unhappy with President Bush 1 and 2. It goes without saying that everyone wants their “side” to win. There is passionate outrage when limits are put on gun ownership or abortion.

But the 2016 election took things to an entirely different level.  The hatred, the vitriol, and as I mentioned before, the loss of friendships.

It seems that we’re no longer allowed in this country to peacefully disagree about politics. We can’t have an interesting debate and then grab a beer with our co-debater.

The level of anger in America has escalated dramatically.

I wrote several times during the last election that I felt like we were headed for civil war. (In this article, 20 readers speculated what they thought a second Civil War might look like.)

In the years since Trump took office, uncivil behavior was no longer condemned, it was praised. From stealing MAGA hats to mocking liberals, people took sides and took them firmly. And it’s still going on – just a couple of months back, a well-behaved boy was demonized by the media simply because he wore a Trump hat.

The media makes is worse, too, and it almost seems like they’re deliberately stoking the flames of division.

Everyone is talking about a looming civil war on American soil, but they’re all blaming the “other” side. The media is deliberately trying to stir things up with breathless headlines about how awful the “other” side is. And it’s working so well it could lead us right to Civil War 2.0. (Here’s what you need to know to be prepared for widespread civil unrest.)

The fact is, both the Left and the Right are to blame, threatening those who don’t have the same worldview. What it’s essential for us to keep in mind is that these are the opinions of the extremes of both sides. We in America have had conservative and liberal points of view along with everything in between for decades without the constant, looming threat of violence…

…It’s essential to note that the threats and anger have been going on for quite some time now. But it seems like there is a whole lot more of it because it’s the topic du jour in the mainstream of late. Just like Selco warned us in his recent article, the media has an agenda and they are playing us like a violin. If there is a Civil War, you can be sure that those in the MSM are every bit as responsible for stirring up the hatred and division as the people who hacked Herd’s website and the dude who wrote the essay I cited.

In no way am I saying that anyone should target members of the media, as happened today in Annapolis, Maryland. Violence only begets more violence. What I’m saying is that you need to be aware of what is happening.

Look how neatly they are making us hate and fear one another. (source)

And watch as this happens all over again…but bigger.

Will the next election be even more brutal?

It’s hard to imagine that the coming election will somehow be peaceful.

Instead, it seems more likely that the simmering anger in this country will boil over. It seems like the division between the Left and the Right will be greater. It seems as though the Trump supporters will be even more demonized than they were the first time around and that whoever ends up as the candidate for the left will rabid supporters from those who hated Trump during his first campaign.

Most of the time, when your candidate loses the election, things settle down. You may not like the new President, but you don’t actively disrespect him at every possible opportunity. You accept the outcome of the election for the next 4 years and then hope that the following election will go your way.

Not so with President Trump. I have never seen more hatred toward a President published on every mainstream outlet. I wasn’t fond of either candidate, to be clear, but I have never seen the media cover a political figure with this level of unfairness and bias.

So yes, I personally believe that the next election will be far more brutal. I believe that getting prepared for the potential of civil unrest is more important than ever.

We certainly can’t expect fair coverage from the mainstream media, which is the only media many Americans are exposed to. Whoever runs against Trump will be portrayed as an angel, no matter how dirty his or her wings are.

My only hope is that people don’t play into it like they did the last time around.

But I’m not holding my breath expecting to see a civil 2020 election. Clear heads will probably not prevail. The hate will be the worst we’ve ever seen and will likely make the last election pale in comparison.

And I think Bannon is right. The chaos is going to start this year, in 2019.

What do you expect?

Do you think that Steve Bannon is right and that the trouble will start this year? Do you think this election will be even worse than the last one with regard to divisiveness? Share your thoughts in the comments section below.