How Did We End Up Having a Baby Formula Shortage? 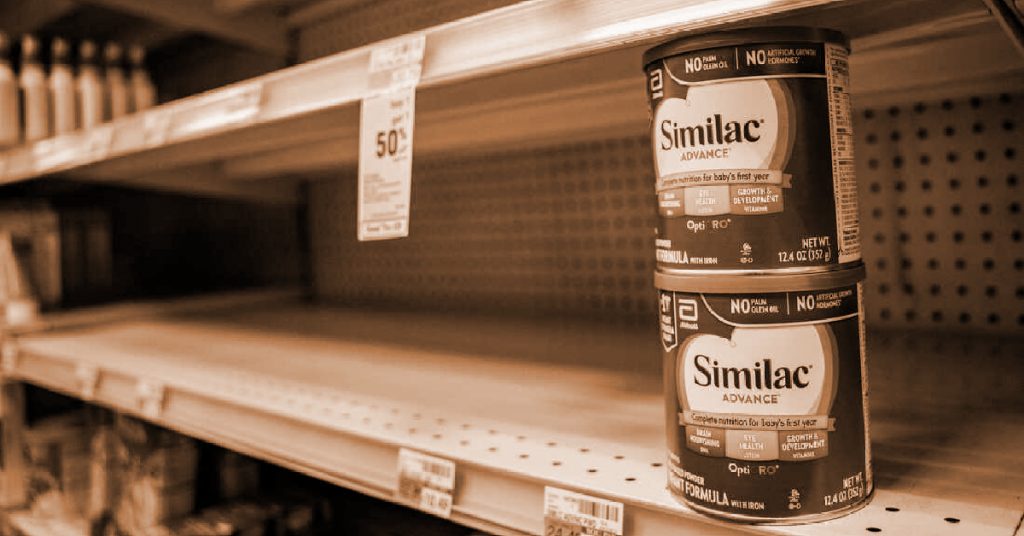 The United States is now facing a severe baby formula shortage and all the data only points to things getting worse. As of early April, approximately 30% of popular infant formula was out of stock at stores across the nation. CVS, Target, and Walgreens were some of the more noteworthy stores that began to ration baby food out at that time. This comes at a time shortly after Georgia has declared a state of emergency due to lack of supplies and Washington DC has began to advocate for the rationing of food.

Now? Now, the data indicates that 40% of popular infant formula brands are out of stock throughout America. What will that percentage be next month?

Much of this has been caused by the recall at Abbott.

Abbott is the largest supplier of infant formula in America. Approximately three months ago, four infants became ill, two of which, sadly, passed away. The FDA and the CDC stepped in, claiming that Abbott’s Michigan facility needed to shut down. Initially, the FDA said that they found unsanitary facility practices at the Abbott facility. Anybody who has ever talked with anyone who has tried to produce and process their own livestock for sale understands how asinine FDA rulings of “unsanitary” can be.

Last month, the FDA and CDC stated that the bacterial strain that made the four babies sick didn’t match the strain of bacteria that was found at the Abbott facility. Despite this, the plant remained closed. There is currently no explanation as to how the contamination occurred.

Now, because of the shortage, the FDA is saying that the Michigan Abbott facility can reopen. According to the company, it will take them approximately 10 weeks before formula once more begins to show up on store shelves across America.

Headlines about the shortage are popping up in media across the nation.

The Guardian recently published a piece titled, ‘It’s a nightmare’: baby formula shortage leaves US parents desperate. Other media outlets have began to publish articles along the lines of ‘How to Feed Your Baby When There’s No Infant Formula.’

As of April, Texas, North Dakota, South Dakota, Tennessee, Iowa, and Missouri were hit the hardest by the shortage of infant formula, experiencing a 50% reduction in infant formula.

(You need to get your food storage in order NOW. Check out our free QUICKSTART Guide on building a three-layer food storage plan.)

A new formula alternative should be available on the market within the next 3-5 years, though – Biomilq – the world’s first lab-grown breast milk.

But why did a “climate change” organization invest money in a lab-grown breast milk company?

According to CEO Michelle Eggers, at the moment, approximately 10% of the world’s milk supply is used to produce milk for infant formula. This is apparently bad for the planet. Eggers and Strickland tout Biomilq as an environmentally-friendly means of feeding babies. Their hope is Biomilq will reduce the carbon footprint of the infant formula industry.

At the moment, we have mysterious fires that are devastating the American food supply. For 3 months, the FDA shut down one of the facilities that America’s largest infant formula manufacturer uses. Despite no link between the bacteria that made the babies sick and the bacteria found in the factory. Furthermore, the FDA discovered no explanation for the infections, but kept the facility shut down another month.

Bill Gates is funding a lab-grown milk factory. (By the way, to create the milk, donors gave breast and milk cells to the company in exchange for a Target gift card. These cells, placed in a bioreactor, replicate the environment found inside of a breast, and produces milk as a end result.)

We have been warning about an American famine for quite some time.

You are about to experience it at a level that you never thought possible. When did you last hear of American babies dying from starvation? Why are you suddenly hearing about it now?

What are your thoughts on all this? Do you have more to add to the conversation? Let us know what you’re thinking in the comments below.