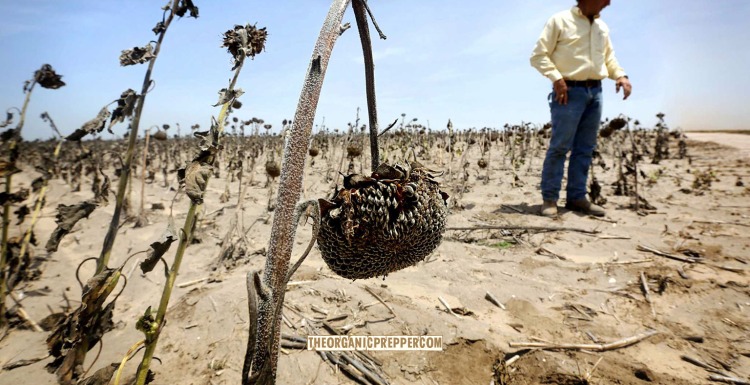 In addition to civil unrest and rising crime, we’re now facing threats to our food supply in the form of drought, fire, and foreign ownership of our farmlands and food processing facilities. Whether it’s meat or vegetables, potatoes or pasta, food is a huge issue. Food tensions have been the cause of many wars throughout history.

The U.S. is losing farms by the thousands yearly

Drought affects our ability to water our crops, whether in the garden or the farm field.

“If there is no water, there is no work. And for us farm workers, how are we going to support the family?” said 57-year-old Pablo Barrera, who was planting watermelons for Del Bosque. [source]

According to Farm Progress, the U.S. lost 4,400 farms in 2020 alone. Average family farm size has remained more or less stable, while Big Agriculture farms, such as CAFOs, have grown noticeably. BigAg tends to be hard on both animals and the environment. However, the U.S. has lost dairy farms at a shocking rate.

US Drought Meter (USDM), a weekly map shows both the geographic areas affected and drought intensity. As of July 27, the data shows nearly 1/3 of the United States is in the Extreme and Exceptional Drought categories, including all West Coast farm countries.

Drought is causing some farmers to walk away

“There is no universally accepted quantitative definition of drought. Droughts are instead usually described qualitatively as a deficit of water relative to normal conditions as referenced by water supply-demand and management.” [source]

California, a state deep in extreme drought conditions, is the largest dairy-producing state in the Union. California is also the nation’s top producer of vegetables, berries, and nuts. According to a piece published by Reuters, in anticipation of even further lack of water, farmers all across the state have left their fields unplanted. Others chose to plant drought-tolerant crops or turn to other forms of income.

Livestock is greatly affected by drought as well

Farmers in Utah are currently dealing with 75% less water than they had last year. Many Utah farmers were forced to plant fewer crops including hay, a staple in livestock feeding. Many farmers will have to sell or slaughter their livestock because they can’t feed or water them. Which dramatically affects future meat prices.

In North Dakota, many pastures are empty as drought left ranchers with no other choice than to sell their herds off to be slaughtered. Cliff Mattson sold more cows in 2 weeks than he had in 6 years. When asked about the other ranchers in the area, Mattson had this to say:

“There have been 300-400 head outfits that have completely sold out. That’s all they did all their lives. It was so disheartening, they didn’t even come to the sale.

“It wasn’t just one time, they started with their older cows, then went to their replacement heifers, then went to middle aged cows, and then last week, we saw young cows come to town. It was so hard to talk to them. There is nothing that will make it any better. I don’t know what they are going to do.”

Foreign ownership of farmland is a substantial cause of economic concerns

Another issue relates to foreign ownership: several of our largest food processing plants, such as Smithfield and JBS, are Chinese-owned. This 2019 article, courtesy of NPR, gives some good statistics on just how much of our farmland is in foreign hands.

Nationwide, the numbers hint at growing global interest in U.S. farmland as an investment opportunity. By the end of 2019, foreign entities held an interest in nearly 35.2 million acres of U.S. agricultural land, representing 2.7 percent of all privately held farmland, according to USDA. That’s about a 60 percent increase from 2009 when foreign entities held an interest in only 22.2 million acres or 1.7 percent of privately held farmland. [source]

Foreign entities are not the only ones buying up U.S. farmland. Non-farmer domestic entrepreneurs and investors also want a piece of the agricultural pie, which will also drive up the cost of agricultural production.

The damaging effects of wildfires are far-reaching

In addition to the evident problem of the burning down of both fields and structures, fires also affect bee populations. Wisconsin has an air quality advisory in place as of this writing due to Canadian wildfires. The air in my garden was thick as I worked, and I saw a few pollinators but not nearly as many as usual. Fire can not only burn the hive. It interferes with the polarized light most pollinators use to navigate. In the short term, fire is a problem for pollinators, along with everyone else.

According to Oregon State Extension, fire is the biggest issue for commercial apiaries. These apiaries typically house honey bees and ground-nesting species such as Mason bees, carpenter bees, and leaf cutters, an estimated 30% of species. Here in Wisconsin, bumblebees also nest in the ground.

Bee populations typically recover in the years following a significant fire since the first plants in the natural succession are shrubs, forbs, and other flowering species. Also, bees aren’t the only pollinators. Butterflies, moths, birds, and even wasps pollinate plants. Commercial agriculture often uses honey bees, but they’re far from the lone worker in the garden and field. This article from the Wiley archive also concludes that overall, the effect of fire on pollinator populations is positive.

Here’s a 2016 article from the British Ecological Society’s Journal of Applied Ecology for the true science geeks among us. It discusses fire ecology as it relates to pollinator populations via a conceptual model.

It might be a wise idea for each of us the do what we can to secure our food supply. By becoming a nation of self-reliant producers, as we once were, we might create a brighter future for ourselves and our children. Becoming a producer is easier than you might think. You don’t have to suddenly grow all your own vegetables and raise meat chickens on the patio of your townhouse to do it. However, growing some of your own food is and learning to build a better pantry are a good start.

Here are a few gardening resources to help you no matter where you live:

Are you concerned that we could be heading into a famine? How are you preparing? Share your thoughts in the comments.