10 Kinds of Americans Who Are RUINING Our Country (Yes. We Know You’re Offended) 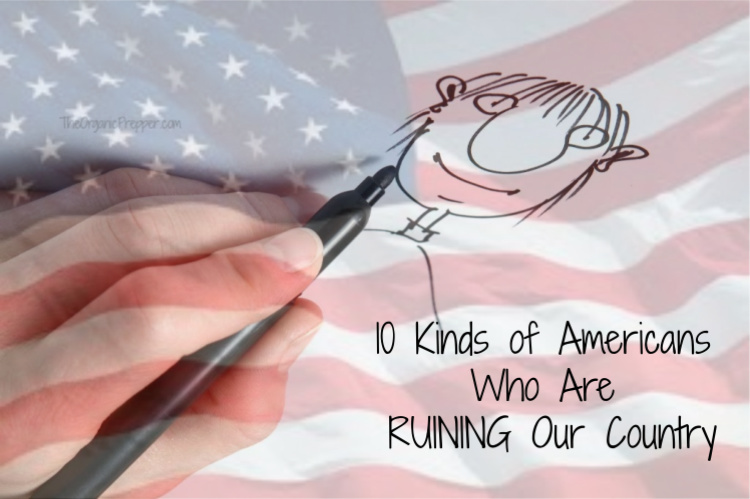 Have you noticed the instant judgment world we’re living in? Are you perhaps a part of it? We are a nation of caricatures, where one opinion leads others to see an exaggerated personality, the qualities of which are desirable or deplorable. (Keep your MAGA hat on – not in that Hillary Clinton way – in the Merriam Webster deserving of strong condemnation way.)

We’ve become so staunchly fixed in our opinions that there’s simply no room for those who have other opinions. We instantly decide based on one snippet of an opinion that a person is “good” or “bad.”  America is incredibly polarized on such a wide variety of topics and people respond in extremes. And you better hope you have a good guardian angel if someone takes a video of you at an angle that tells something other than the real story – you’ll face the wrath of the entire internet all at once.

There are all sorts of people weakening America, but no one can agree on the worst culprits.  And that in itself is a problem – there’s a total lack of acceptance for the opinions and beliefs of others. Somehow, this country that used to value rugged individualism has turned into something entirely different. Everyone is seen as a caricature as opposed to an actual person with a variety of diverse opinions.

Here are 10 examples of the people who get blamed for everything that is wrong with America.

(And yes. I know you’re offended.)

Are you a Christian? You know the right way to live. You know that you have to work to eat. You know where you’re going after this life is done.  But according to some, you’re too Christian and you’re pushing your religion on them. Your beliefs are offensive to many people and the fact that you teach your children your religion is practically criminal. In a country born on the freedom of religion, your belief system now marks you as backward, uncaring, and downright ignorant of science.

Are you not a Christian?  You think those churchy people are silly with varying degrees of scorn. You know that science is the answer and that facts are all that matters. You know where you’re going after this life too. You told your kids to bury your remains and plant a tree on them so you can at least be of some use as a rotting corpse. Well, this non-Christianity means that you are, on principle, a bad person even if you haven’t done anything wrong. If heaven forbid, you are an atheist or an agnostic person, then you are just waiting for the opportunity to rape and murder because you don’t have Jesus in your life. How can you even know right from wrong if you never go to church?

Disclaimer: Please note that certain alternative religious beliefs are somewhat acceptable, while some religious beliefs paint the faithful as either terrorists or exotic, downtrodden people in need of the condescending support of those who picture themselves as apostles of equality. And some of the less well-known beliefs? Well, they worship the devil, plain and simple. You’ll know them when you see them.

Are you a Republican? You’re too conservative, you hate poor people, and you want to control women’s bodies. You really hate people of color, particularly those who are poor or getting an abortion. You think the lack of religion (your religion) is the problem with this country and you want to go back to old school values and make sure no one ever gets welfare. All those babies you insist should be born are just going to need to get jobs. Your favorite things are wars on foreign soil, vehicles that are adamantly environmentally unfriendly, and the 4th of July.

Are you a Democrat? You are too liberal, you’re part of the lunatic fringe, and you are killing America. You are probably a blue-haired lesbian or an effeminate, albeit beautifully dressed, gay man, you want to invite criminals into our country and give them the right to vote, and you have been a part of numerous abortions. You believe rich white men are the problem with this country and you wish bad things on anyone who disagrees. You enjoy protests, poetry readings, and taking away guns from law-abiding citizens.

Are you politically neither a Republican or Democrat? Making your own decisions that don’t go down a party line is confusing. What kind of heathen thinks drugs should be legalized and the government needs to stay out of people’s bedrooms while at the same time fully supporting the right to bear arms? Don’t these people understand that taxation is the price we pay for a civilized society and ROADS, for the love of gravy? You just can’t make up your mind and the fact that you opt out of political stuff means you hate America. You love gay weddings, gun shows, and long walks in Somalia.

Are you just quietly minding your own business? What the heck is wrong with you? Don’t you care that there are babies being aborted, women being forced to bear unwanted children conceived of rape or incest, bakers are refusing to/being forced to make gay wedding cakes, school shooters are everywhere because we haven’t melted down all the guns in America, teachers don’t carry guns, some city ripped out a person’s front yard vegetable garden, Kroger got rid of their organic food aisle because they want to poison us all with glyphosate and it’s part of the eugenics scheme, and American Idol was canceled because everyone can’t get a trophy? Your peaceful hobbies can wait. Knock it off with the Tai Chi and go raise Cain about something. Show us you care.

Do you only eat healthy food? Perhaps you look down on people who are overweight and simultaneously blame the entire obesity epidemic on Monsanto and the USDA food pyramid, which you feel should be inverted. Going out for a celebratory dinner is a nightmare for you as you pick at your plate with a lightly filtered sneer on your face while all the stupid people you’re with just dive right in. You scorn people who eat processed food and you believe those chronically ill people wouldn’t be so sick if they’d just eat clean, get off their scooters, and go for a walk, for crying out loud.

Are you vegan/paleo/keto? You are a thousand times healthier than all those stupid omnivores. Your WOE (way of eating) is everyone else’s woe (great sorrow or distress.) You are better and healthier than you’ve ever been before in your entire life, you have the key to health and longevity, and you make sure everyone knows it. Daily and at full volume. Heaven help us if you also do cross-fit.

Do you relish the Standard American Diet and processed food? Your pantry is full of Pop-Tarts, Doritos, and ramen noodles. You love nothing better than a belly-busting meal at Golden Corral where you can get 8 kinds of meat, “salads” swimming in mayonnaise, and some fried veggies on the side (dipped in ranch, duh.) You’ve eaten this way your whole life and so did your family and they all lived to be 90. When it’s your time, it’s your time, and you’ll go down with a plate of bacon, buttered toast, and a glass of whiskey in front of you. You were a quarterback in high school and although you’ve never run anywhere since then, you’re certain you could go full Rambo in a split second if the North Koreans started parachuting from the sky ala Red Dawn.

How did we become a nation of caricatures?

I bet everyone reading this saw people they knew in the descriptions above. Heck, you might have even seen yourself. But you also knew there was more to you than that judgmental little paragraph of description.

So maybe there’s more to those other people, too, huh?

Moderation is a lost art for many. We’ve become so wrapped up in these generalized identities that a lot of folks don’t have one of their own. People have become caricatures, with exaggerated qualities and staunch platforms of belief. At least that’s how we’re seen. But aren’t we more than that?

Maybe we could even take a step back, stop categorizing people, and look for some common ground.