Americans Don’t Trust the Govt, the Media, or Each Other: Fading Trust is “Sign of Cultural Sickness and National Decline” 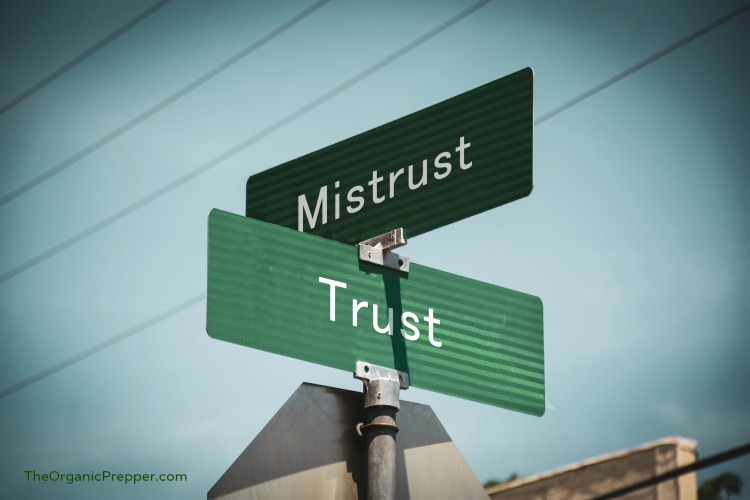 Americans are losing trust in each other, in the government, and in the media, according to a concerning new survey.

Pew Research Center is a nonpartisan fact tank that conducts public opinion polls and social science research and informs the public about issues, attitudes, and trends shaping the world. The organization recently published a new report called Trust and Distrust in America, which reveals that Americans think declining trust in the government and in each other is making it harder to solve important problems.

Confidence in the government and in each other is shrinking.

Many Americans think it is necessary to clean up the “trust environment”: 68% say it is very important to repair the public’s level of confidence in the federal government, and 58% say the same about improving confidence in fellow Americans. 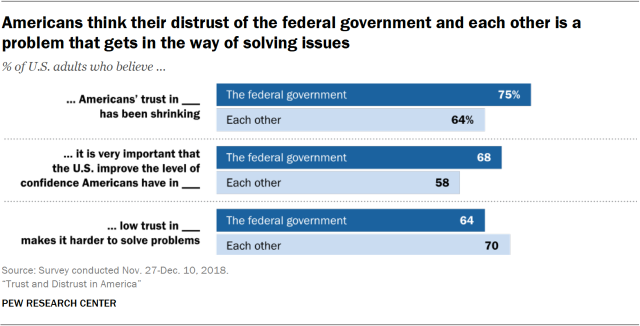 There are several reasons for the decline in trust.

Diminishing trust is viewed by some as a sign of cultural sickness and national decline. Others believe it is linked to what they perceive to be increased loneliness and excessive individualism.

Those who think interpersonal trust has declined in the past generation offer a laundry list of societal and political problems, including a sense that Americans on the whole have become more lazy, greedy and dishonest. Some respondents make a connection between what they think is poor government performance – especially gridlock in Washington – and the toll it has taken on their fellow citizens’ hearts. (source)

Overall, 49% of adults think interpersonal trust has been tailing off because people are less reliable than they used to be.

In a comment typical of the views expressed by many people of different political leanings, ages, and educational backgrounds, one participant in a new Pew Research Center survey said: “Many people no longer think the federal government can actually be a force for good or change in their lives. This kind of apathy and disengagement will lead to an even worse and less representative government.” Another addressed the issue of fading interpersonal trust: “As a democracy founded on the principle of E Pluribus Unum, the fact that we are divided and can’t trust sound facts means we have lost our confidence in each other.” (source)

For instance, high trusters often have significantly more positive views about their fellow Americans’ civic and political behaviors than do medium or low trusters. The gaps are particularly striking when it comes to how much confidence high trusters and low trusters express in Americans’ willingness to treat others with respect (54 percentage point gap between the high and low trust groups), respect the rights of people who are not like them (48 points), do what they can to help others in need and obey federal and state laws (both have 45-point gaps), accept election results regardless of who wins (43 points) and honestly report their full income when paying taxes (38 points). (source)

Public confidence in the government is at historic lows.

Trust in government has been declining for decades, and for good reasons, according to the report:

Long-running surveys show that public confidence in the government fell precipitously in the 1960s and ’70s, recovered somewhat in the ’80s and early 2000s, and is near historic lows today.

The rise of independent news sources like Wikileaks that are not afraid to dump truth out there for all to see – exposing widespread government corruption in the process – has no doubt led to the diminishing trust in government.

The majority believes that officials and the media withhold information.

About two-thirds (69%) of Americans say the federal government intentionally withholds important information from the public that it could safely release, and 61% say the news media intentionally ignores stories that are important to the public.

In addition, many say it is becoming more difficult to tell fact from fiction:

In this era of rampant mainstream media “fake news” and the government’s long history of orchestrating false flags, it is no surprise many Americans do not trust either institution. Attempts to censor alternative media outlets are not exactly helping to build trust, either. Mainstream news outlets are often quick to report on events, often sensationalizing them, facts be damned. Remember when the MSM twisted the Covington Catholic story, essentially putting a target on the back of a teenaged boy? The MSM also has a tendency to sugar-coat important events, including glossing over details surrounding extremist attacks. There are countless examples of the media’s manipulation of details in order to fit a certain narrative. Often, it seems that the media is deliberately trying to incite civil war (that would be great for their ratings, right?).

While some level of trust is important to society, it has downsides.

The report explains that while social trust “is seen as a virtue and a societal bonding agent, too much trust can be a serious liability. Indiscriminate trusters can be victimized in any number of ways, so wariness and doubt have their place in a well-functioning community.”

As preppers know, the risk of widespread civil unrest becoming reality in the near future is increasing. “Uncivil behavior isn’t just widely accepted – it’s praised and cheered on. Hatred of one another is becoming the norm and this is how civil wars begin,” Daisy Luther warned us last year.

While it is wise to be careful about who you allow in your circle, distrust can be taken to the extreme. Finding a small group of like-minded people to collaborate with isn’t a bad idea. But because it can be difficult to know whom you can really trust these days, becoming as self-reliant as possible is crucial.

People link declining trust with other major problems they see.

On a grand scale of national issues, trust-related issues are not near the top of the list of Americans’ concerns. However, people do link declining trust as a factor that impacts other issues they do consider important:

For example, in their open-ended written answers to questions, numbers of Americans say they think there are direct connections between rising distrust and other trends they perceived as major problems, such as partisan paralysis in government, the outsize influence of lobbyists and moneyed interests, confusion arising from made-up news and information, declining ethics in government, the intractability of immigration and climate debates, rising health care costs and a widening gap between the rich and the poor.

Many of the answers in the open-ended written responses reflect judgments similar to this one from a 38-year-old man: “Trust is the glue that binds humans together. Without it, we cooperate with one another less, and variables in our overall quality of life are affected (e.g., health and life satisfaction).” (source)

Most people believe it is possible to regain trust.

The majority of Americans think that trust can be restored and that it is possible to improve the level of confidence people have in the government and each other:

More than eight-in-ten Americans (84%) believe it is possible to improve the level of confidence people have in the government.

Their written responses about how to make headway on trust problems urge a variety of political reforms, starting with more disclosure of what the government is doing, as well as term limits and restrictions on the role of money in politics. Some 15% of those who answered this question point to a need for better political leadership, including greater honesty and cooperation among those in the political class.

Similarly, 86% believe it is possible to improve peoples’ confidence in each other. They say local communities can be laboratories for trust-building as a way to confront partisan tensions and overcome tribal divisions. Some also make the case that better leaders could inspire greater trust between individuals. Others suggest that a different approach to news reporting – one that emphasizes the ways people cooperate to solve problems – would have a tonic effect. (source)

Are you a trusting person? Which criteria do you use to determine if a person or institution is trustworthy? Do you think that the US government (or any government) is worthy of trust? Please share your thoughts in the comments.