Everything We Know About Assange, Wikileaks, and the Frantic Attempt to Shut Him Up 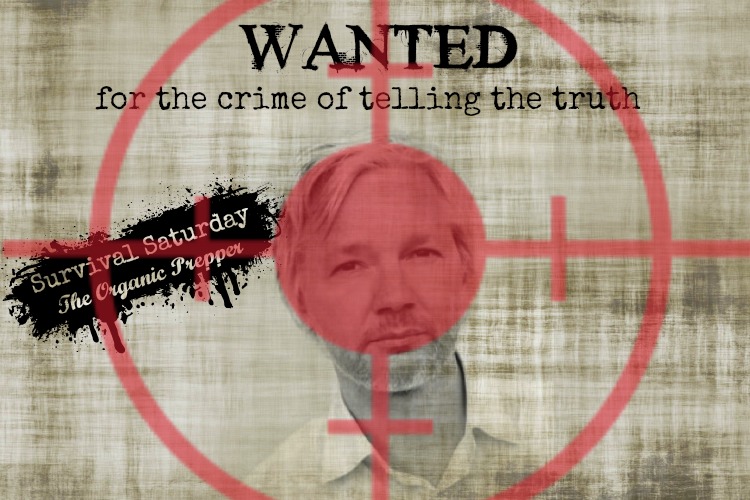 This week, Wikileaks Edition of Survival Saturday focuses on Julian Assange, his team, and the secrets that they are telling. Assange is in a fight for his life right now, and he’s still dropping truth bombs on a daily basis in an attempt to show Americans the political system as it really is.

We all need to think about preparing for an uncertain future. The world is in a state of upheaval and the headlines are positively frenetic. If you aren’t prepped, these resources can help you get ready quickly:

Who else wonders how Ecuador was persuaded to switch off Julian Assange’s internet?

Assange has been harbored inside the Ecuadoran Embassy since August of 2012, when they granted him asylum. Up until now, they have allowed him to do his thing, unfettered, until just last week. The very fact that the Embassy pointed out they did not bow to foreign government pressure probably means they did.

Although it has been denied, Wikileaks tweeted that John Kerry asked the Ecuador government to switch off the internet in order to prevent any more damning evidence of why Hillary Clinton should not become president. (Note that the Tweets in this post are screenshots instead of being embedded – after all that has gone on, I don’t really trust that their Tweets will always be available.) Obviously, this has been emphatically denied by both sides. 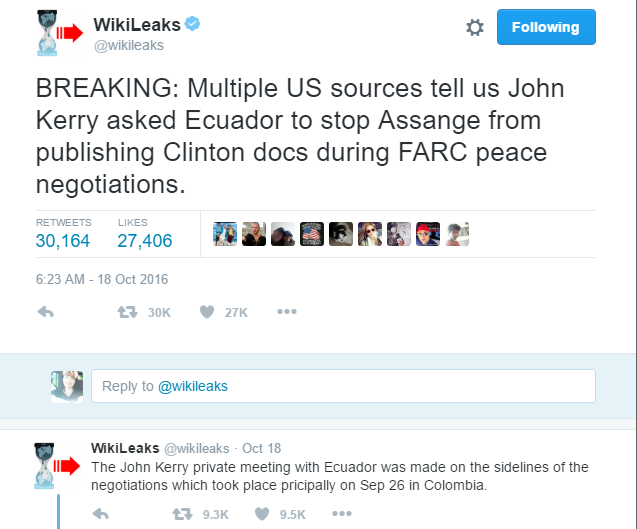 Ecuador said that the internet connection that Assange uses has been “temporarily disconnected” because the Wikileaks dumps were having a major effect on the upcoming presidential election. (source)

Which was kind of the point.

I guess it’s only okay to influence the election if your last name rhymes with Muckerburg or if you are a member of the mainstream media.

Then there’s the fact that Ecuador is known for political corruption, how very ironic they should state they can’t condone any actions that can affect the presidential election.

Ecuador has laws and regulations to combat official corruption, but they appear to be inadequately enforced. Illicit payments for official favors and theft of public funds take place frequently. Dispute settlement procedures are complicated by the lack of transparency and inefficiency in the judicial system. In addition, there are frequent allegations by the private sector that local authorities may demand “gratuities” to issue necessary permits.(source)

Makes taking their reasoning for the cut-off a bit suspect don’t you think? Yeah, me too.

Clinton’s own outlet, CNN  (Clinton News Network) provided us all with a public service announcement this week, dispensing the legal advice that you’d better not be reading Wikileaks unless you’re a member of the media.

“Also interesting is, remember, it’s illegal to possess these stolen documents. It’s different for the media. So everything you learn about this, you’re learning from us.”

Don’t take it from me. Take it from legal wizard extraordinaire Chris Cuomo.

The lowlights thus far from the 25,000 Podesta emails.

The 14th Wikileaks Podesta data dump brings the total number of emails released so far up to 25,000, leaving us to wonder, did that Podesta guy have time to actually do anything else? He was certainly a prolific emailer. RT has the highlights of the latest leak.

For a refresher on each of the previous batches of emails the Russian government news agency Sputnik has the rundown here.

Here are some of the most important things that have emerged (the links are clickable for more information on each):

Here’s a great video by my friends from Truthstream Media with even more revelations.

Wikileaks says they have 50,000 of Podesta’s private emails.If they keep releasing them in batches, there’s a distinct possibility that we will get some on election day itself.

I wonder if Wikileaks is keeping the best for last?

The efforts to shut up Assange have led all sorts of ugly places. If you can’t drone him (like Hillary Clinton suggested), then frame him and accuse him of pedophilia. Wikileaks has provided a timeline and supporting links for the sustained efforts to discredit Assange.

Now, I’m no stranger to the tinfoil, but this seems to me the most blatant attempt to discredit someone that I’ve ever seen. The timing is quite the coincidence, don’t you think? For more Assange, here are some of the conspiracy theories that have been going ’round the internet lately.

Assange has made some incredibly powerful enemies. His longevity is far from certain.

And then there was that day that the US internet got hacked. 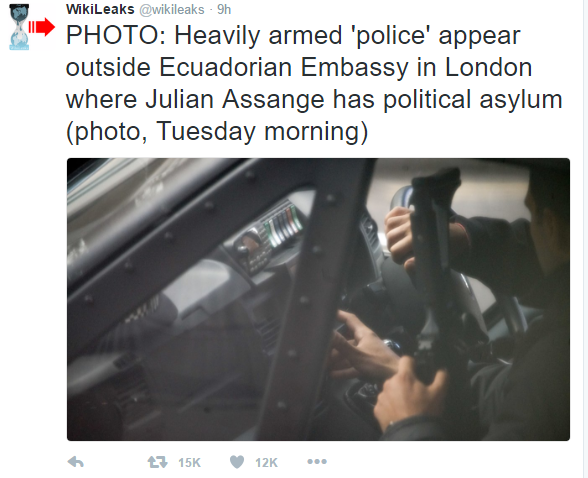 The “police” presence apparently began to amass earlier this week just as Wikileaks confirmed that the Ecuadorian had agreed to cut Julian Assange’s internet access after a little political pressure from John Kerry…and as an allegedly bogus plot, with links to the Clinton campaign, was revealed that attempted to link Julian Assange to a pedophilia ring.

Shortly after the Tweet appeared, the internet went down over much of the United States. Dozens of websites such as Twitter, Reddit, Amazon, Netflix, the New York Times and Spotify, as well as general internet service in certain areas of the country, were all down for part of the day (the entire list is at this link). A DDoS (Distributed Denial of Service) attack was blamed for the outage.

Ironically, NorseCorp, the company that has the real-time cyber attack map, was also down for most of the day.

This happened not once, but twice. The FBI and the DHS are investigating the cyber attack so I’m sure we’ll get the *truth* soon. Rumors abound, including blaming Russia (of course, and after VP Biden’s idiotic threat to cyber attack them, could you really blame them?), that it was our own government hoping to cover up some even they’d like to distract us from, or, interestingly, that it was a hacker group who did this in defense of Julian Assange. (Wikileaks seems to think that too – see the screenshot below of their Tweet.) 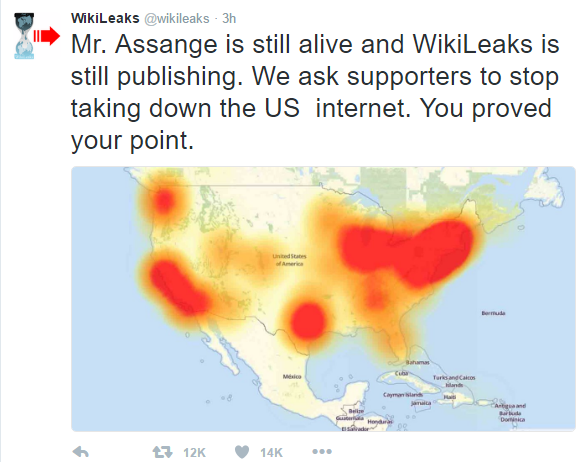 But…another group altogether has taken credit for the massive hack. SHTFplan reports that this is the beginning of WW3 – which could be fought online:

A hacking collective calling itself “New World Hackers” are taking credit – and they are based out of Russia and China, so there is little doubt that it will fuel the narrative for more war, tighter security and an age of online instability as the new world (where the dollar is no longer king) is sorted out.

New World Hackers responded to a request for an interview with Anon Intel Group. Their message to the world? “Stay educated.”

This Week on The Organic Prepper…

What do you think of Assange and Wikileaks? Love him or hate him? Why?  Share your opinion and any supporting links in the comments below! Please join the discussion!