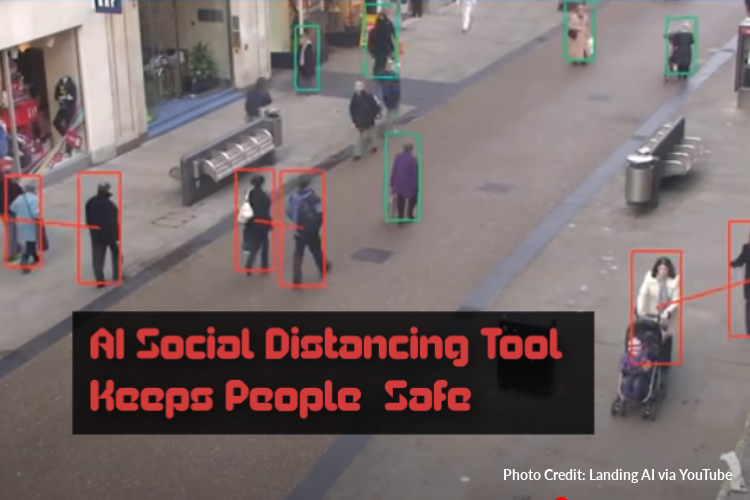 Landing AI has created a new tool to help keep people “safe” by spying on them with a camera that measures whether or not they’re properly participating in social distancing. Because who needs privacy when there’s a deadly virus around, right?

To complement our customers’ efforts and to help ensure social distancing protocol in their workplace, Landing AI has developed an AI-enabled social distancing detection tool that can detect if people are keeping a safe distance from each other by analyzing real time video streams from the camera.

For example, at a factory that produces protective equipment, technicians could integrate this software into their security camera systems to monitor the working environment with easy calibration steps. As the demo shows below, the detector could highlight people whose distance is below the minimum acceptable distance in red, and draw a line between to emphasize this. The system will also be able to issue an alert to remind people to keep a safe distance if the protocol is violated.

As part of an ongoing effort to keep our customers and others safe, and understanding that the only way through this is with global collaboration, we wanted to share the technical methodology we used to develop this software. (source)

Watch the quick video below.

Watching life go on through the eyes of an artificial intelligence device has a certain sense of dystopia. The technology highlights “people whose distance is below the minimum acceptable distance in red, and draw a line between to emphasize this.”

What will they do to enforce it? Make people wear shock collars that will give them a little zap when they get to close to a fellow human being? Deploy a drone to give them a verbal warning? Dispatch a human being to get within six feet and threaten them with arrest, resulting in even more contact?

Landing AI doesn’t mention that. Instead, they conclude cheerfully:

As medical experts point out, until a vaccine becomes available, social distancing is our best tool to help mitigate the coronavirus pandemic and as we open up the economy. Our goal with creating this tool and sharing it at such an early stage, is to help our customers and to encourage others to explore new ideas to keep us safe. (source)

AI in the workplace

Landing AI is a company out of California that will work “closely with you to empower your company to become an AI-driven organization” and they hope to “influence the emerging AI generation.”

Some workplaces may be launching AI technology in the age of social distancing.

One potential use touted for the technology is that it would enable workplaces to monitor their employees to make sure they are operating within the advised distance of each other. It’s even able to issue alerts to remind them to re-establish that distance if they break the rules.

The system works by using an artificial ‘neural network’ that detects individuals and draws a box around them. If two boxes come too close to each other, they are highlighted in red.

Perhaps unsurprisingly, Amazon has already introduced similar technology in its warehouses, and has warned workers they could be fired if they violate social distancing guidelines. (source)

So, just in case your workplace isn’t already looking over your shoulder to a sufficient degree, your every move could soon be digitally downloaded.

Oh, and there’s no need for privacy concerns. Landing IA says that those deploying their system should only use it on people who have given their “informed consent.”

The rise of computer vision has opened up important questions about privacy and individual rights; our current system does not recognize individuals, and we urge anyone using such a system to do so with transparency and only with informed consent. (source)

Because we know that’ll happen when they pop this bad boy into the already-existing surveillance cameras in cities across America. They’ll be sure to let us know they’re now also measuring how close e get to our fellow humans too and of course they’d never use other tech to identify “offenders.”

At this point, the word “safe” should now be looked upon with suspicion any time it’s used in a sentence uttered by the government or anyone who contracts with the government. Just like the way people can be kept “safe” by not being allowed to purchase non-essentials (to be determined by the government) from open stores.  Or how Baltimore has deployed surveillance drones 24 hours a day to keep people “safe.”

We’ve now crossed the Rubicon between intelligent measures to reduce the spread of illness and authoritarian control. The protests are growing daily.

At some point in the not-so-distant future, people are going to completely rebel and we’ll all be dealing with the fallout. Or potentially worse, nobody will rebel and this will become our everyday lives. We’ll be so “safe” that we’ll never experience true freedom again.

Will the overreach be here to stay?

In the words of Rahm Emmanuel, former mayor of Chicago, President Obama’s Chief of Staff, and senior advisor to President Clinton, “You never want a serious crisis to go to waste. And what I mean by that is it’s an opportunity to do things that you think you could not before.”

Our government, along with governments around the world, are taking those words to heart. Please do not think that surveillance deployed now will just go away if or when the virus is eradicated. Don’t believe it for a minute when you are told the measures are only temporary.

All you have to do is remember the Patriot Act and take a look at your “travel papers” if you’ve got them, to realize the infringements on our freedom happening now are very likely here to stay with only some minor modifications to make us feel like we’re “free” again.

This is dividing our country.

All of this may sound like I support infected people being out there willy-nilly and mingling with everybody else. That’s not the case. You can be concerned about a deadly virus, the economy, and freedom all at the same time. These things are not mutually exclusive.

But we’re being made to feel that you have to choose only one thing to worry about and to hell with the rest. We’re being pitted against one another and that never ends well. And the longer the population is locked up and kept from making a living, the higher tensions are going to rise. Civil unrest is already happening and it’s inevitable that it will get worse.

What do you think of yet another surveillance device being used on us? Are you more concerned with the virus, the economy, or the attacks on personal liberty? Or are you concerned with all of the above? Share your thoughts in the comments below.