This Weekend Is Y2K for GPS Systems: Experts Warn the Grid, Finance, & Transportation Are at Risk 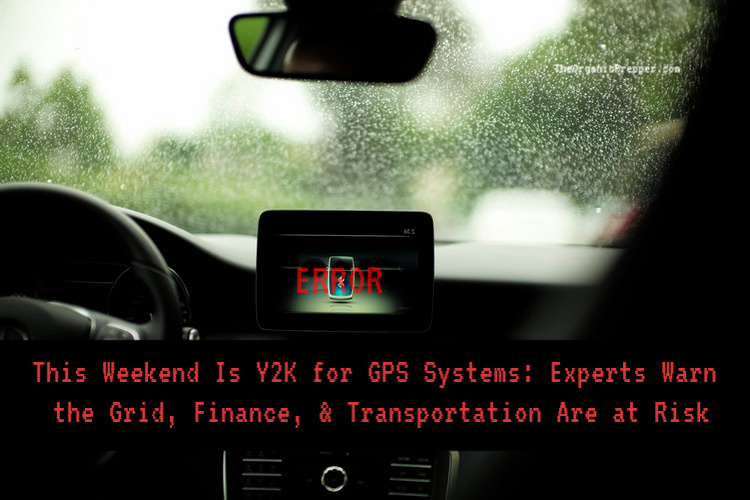 What’s this all about?

The rollover issue itself is caused by the fact that GPS systems count weeks using a ten-bit parameter. This means they start counting at week zero and reset when they hit week 1,024. The first count (or “GPS epoch”) started on January 6th, 1980, and the first reset took place on August 21st, 1999. That means the next one is due April 6th this year. (source)

The good news is, devices have successfully been through an epoch before. The bad news is, some devices could go haywire and we’re way more tied into the GPS grid than we were when it happened in ’99.

Relax. I don’t think planes will begin crashing into the ocean.

But, if you have an older device and you haven’t been updating it, there is the possibility that the epoch could cause big problems.

When the rollover happens older devices may reset their date, potentially corrupting navigation data and throwing off location estimates. GPS relies on precise timing data to operate, and each nanosecond the clock is out, translates into a foot of location error.

All this is why some have compared the issue to a sort of mini Millennium, or, Y2K Bug for GPS receivers that will come into affect from April 6th this year. Bug. That was also caused by a number rollover problem, as a lot of early software recorded the year using a two-digit code (“78” for “1978” and so on) that reset when clocks hit the year 2000. (source)

The most likely issue is that your car’s navigation system will be wonky, with inaccurate times of arrival, and incorrect times and dates.

But other problems could happen, too.

Financial companies who use GPS to record trades could have issues when the times, dates, or locations are off. As well, ports that use GPS location to report the loading of ships could have inaccurate information. Remember when there was that cyberattack and all the ships had no idea where to go?

…because GPS satellites are also crucial to digital timekeeping used by websites, electrical grids, financial markets, data centers and computer networks, the effect of April 6 may be even more wide-ranging.

“I’m not going to be flying on April 6,” said one information-security expert during a presentation at the RSA 2019 security conference in San Francisco this week…

…”The effects would be more widespread [today] because so many more systems have integrated GPS into their operations,” said Bill Malik, a Trend Micro vice president who said he wouldn’t fly April 6, in a private conversation with Tom’s Guide.

“Ports load and unload containers automatically, using GPS to guide the cranes,” Malik said. “Public-safety systems incorporate GPS systems, as do traffic-monitoring systems for bridges. Twenty years ago these links were primitive. Now they are embedded. So any impact now will be substantially greater.”…

…FalTech GPS, a British company that makes GPS signal repeaters for indoor use, said in a blog post that “some GPS receivers, or other systems that utilize the date and time function, may not be able to cope.”

Experts seem to be at odds over the risk.

Some experts think that the risk is negligible, while others think this is something to which we should pay strict attention.

Carl “Bear” Bussjaeger, a New Hampshire-based science-fiction writer, Air Force veteran and former telecommunications network technician, reached out to us via Twitter to say that the link between GPS timing and telecom networks is not direct.

“Networks don’t time off GPS,” Bussjaeger said in a tweet. “They time off internal/master station clocks. Those clocks periodically synchronize off GPS.”

In a further conversation, Bussjaeger told us he had monitored the 1999 GPS epoch rollover as part of his telecoms job, and that there was “not so much as a bit error” on the network clocks.

“The clocks used in telecoms can free-run for days,” he said. “They’re very stable. GPS timing is really just a backup to the backup.”

During an epoch rollover, Bussjaeger said, “geolocation could glitch, but only momentarily, if at all. A GPS unit might have to reacquire the birds [satellites] to determine its location, but it’s no worse than turning on a unit and waiting for it to acquire [the satellite signal] in the first place.”

“Twenty years ago, we didn’t have a problem,” he added. “I rather expect that clocks are better, more stable now.” (source)

On the other hand, not everyone sees it as a non-event.

“I would say it’s legitimate to be concerned,” Brad Parkinson, the retired Air Force colonel and Stanford University professor who was the lead architect of GPS, told San Francisco’s KPIX-TVin an interview published April 2.

“GPS affects everything we do,” he said. “It affects timing, banking, cell towers, airplanes, ships, passengers in cars … everything that we can imagine.”

“If you’re driving your car and it were to suddenly say you’re in the middle of the Pacific Ocean, be very suspicious,” he told KPIX-TV. (source)

So, basically, the vibe I’m getting from this is that nobody really knows what will happen, or even if anything will happen. Either way, it’s good to be aware that there’s some potential for issues and be prepped for a possible power outage – I doubt it will be long-term,

Just because you don’t have problems on April 6th, it doesn’t mean you’re out of the woods.

…it’s worth noting that just because the next GPS week reset is scheduled for April 6th, actual errors might kick in later. As telecoms testing company Spirent noted in a blog post, some devices may have restarted their week count later — for example, when the manufacturer compiled their firmware. As Spirent’s Guy Buesnel writes, that means “the impact won’t necessarily be felt on rollover day itself. In fact, it’s much more likely that an affected receiver won’t start outputting erroneous data until long after the 6 April 2019.” (source)

There’s really no way then, to know if your GPS will one day steer you horribly wrong.

The good news is, you can avoid all these problems with a simple update. The Department of Homeland Security released a white paper with these recommendations:

Critical Infrastructure and other owners and operators are strongly encouraged:

1. to investigate and understand their possible dependencies on GPS for obtaining UTC,

2. to contact the GPS manufacturers of devices they use to obtain UTC

a. to understand the manufacturers’ preparedness for the April 6, 2019 WN rollover,

b. to understand actions required by CI and other owners and operators to ensure proper operation through the April 6, 2019 WN rollover, and

3. to ensure that the firmware of such devices is up-to-date (source)

Garmin says it’s no big deal, but you can also go here to learn how to update your device.

TomTom, on the other hand, warns that you really need to update your device and explains how.

What do you think will happen?

Do you think this will be a non-event like actual Y2K? Or do you foresee serious problems? If you use any kind of navigation equipment, have you updated it? Share your thoughts in the comments below.