The Petya Ransomware Cyberattack: “THERE IS NO KILL SWITCH.” 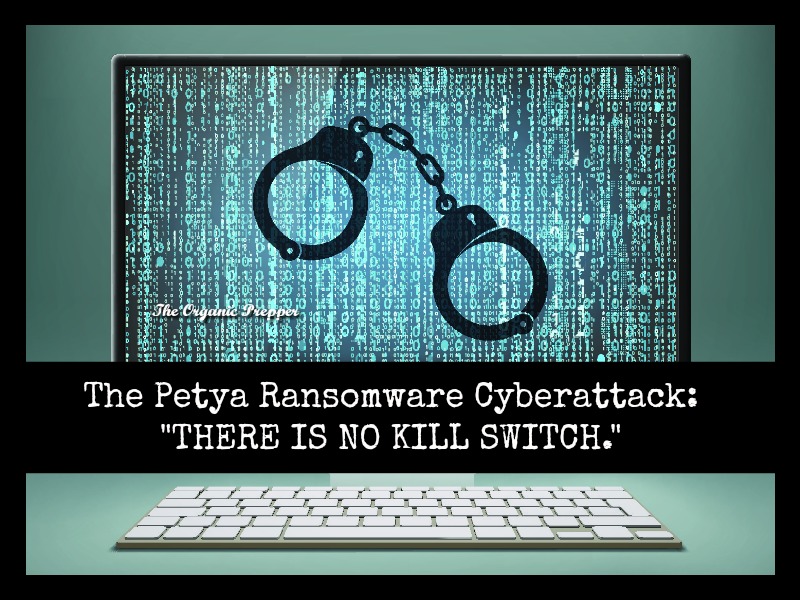 Remember that Eternal Blue loophole created by the NSA? Well, it has been exploited again in the launch of the Petya Ransomware Cyberattack. Thanks, NSA.

The attack began earlier today and has crippled some major companies across the globe. No one has taken responsibility for the virus, and according to Matthieu Suiche, the security researcher who helped fight the WannaCry attack earlier this summer, “There is no kill switch.”

Suiche said that today’s attack is “an improved and more lethal version of WannaCry.” (source)

The security researcher who helped fight the WannaCry attack says of #Petya 'There is no kill switch.'Click To Tweet

Victims of the attack report:

Photographs and videos of computers affected by the attack show a message of red text over a black screen. The message read: “Oops, your important files have been encrypted. If you see this text then your files are no longer accessible because they have been encrypted. Perhaps you are busy looking to recover your files but don’t waste your time.” (source)

Word to the wise: take special care not to click on ANY attachments in your email unless you are certain of the sender.

The cyber attack originated in Ukraine, where it affected 12,500 computers. It spread quickly to 64 countries. (source)

It seems to be centered mostly in Europe:

Ukraine bore the brunt with more than 60 percent of the attacks, followed by Russia with more than 30 percent, according to initial findings by researchers at the cybersecurity firm Kaspersky Lab. It listed Poland, Italy and Germany, in that order, as the next-worst affected. (source)

How will this attack affect ordinary folks like you and me?

As the attack ripples across the globe, we have to wonder how this will affect us individually. While the main targets appear to be large corporations, there could easily be a trickle down effect.

For example, one company hit hard by the attack is the largest shipping container company in the world, AP Moller-Maersk. The company has said that every branch of its operation has been affected. Should the company not be able to recover quickly, the supplies that are already in the water will still be headed our way, but we could face a long delay for other supplies.

Chillingly, Chernobyl Nuclear Plant has lost computerized monitoring of radiation and has had to switch to manual controls. I think we all know what could go awry there.

Ukraine has been hit particularly hard – the country’s banks, the capital’s airport, and power grid have all been attacked. As well, the offices of top government officials have been shut down, as have Ukrainian Railways and the communications company Ukrtelecom. Also stunned by the cyberblow are supermarkets, gas stations, energy companies, and ATMs.

Other victims of the hack:

As more information comes in, I’ll update this list.

Keep a close watch on this one. If it spreads, other businesses could be affected.

The ones I’m the most concerned about are the shipping companies. If America’s “just-in-time” system of supplies is disrupted, we could begin to see shortages fairly quickly. This could happen within a month, since there are cargo ships apparently 17 days from port right now. After those land, who knows when more ships will be coming?

We have stopped being a nation of producers and have become a nation of consumers. We have become dependent on other countries for everything, people often forget that it can all disappear so quickly.

If you’re not well-stocked on food and basic supplies, you might want to get on that. You can purchase things locally or order them online from American companies to be assured your supplies reach you. Here are some lists of things you may want to have on hand:

Hopefully, this is an issue that will be resolved fairly quickly and there will be no need for concern.

But if it gets worse…

You might want to have some stuff on hand if you don’t already.