Have a Good Weekend? Atlanta Didn’t. 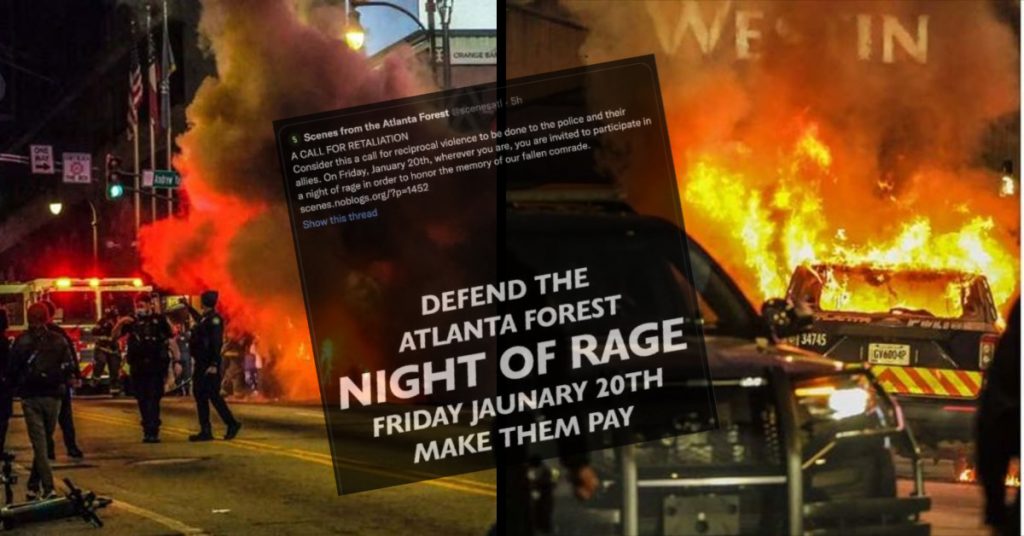 Apparently, there’s been another Antifa autonomous zone set up in the United States, and it’s been allowed to exist for months. In the woods near Atlanta, Antifa members have set up something of an enclave in the woods (it looks like an overturned pickup truck with a banner over it) and are using it to stage what they call a protest of the building of a new police training center in the area.

Reports have trickled in that these Antifa members are digging deep pits in the woods and then starting brush fires, with the hopes that firefighters who come to put out the fires will then fall into the pits and be injured. It is unclear if the pits were further booby-trapped and there don’t seem to be any reports of firefighters being injured.

Other reports have indicated that Antifa members are infiltrating the church services of construction workers and contractors who are involved in the building of the new police training center. I haven’t been able to find anything about whether these church infiltrations have led to any incidents or not. (If you know of them, please let us know in the comments section below.) Perhaps it goes without saying, Antifa members likely conducted surveillance on these churchgoers in order to determine where they attended and at what times.

In response to Teran’s death, Antifa throughout the US took to calling for a “Night of Rage” within Atlanta. Numerous online Antifa accounts openly advocated for acts of physical violence to “avenge” the “martyrdom” of Teran using Twitter and other venues. Twitter has since deleted many of these Antifa accounts.

On the “Night of Rage,” a large mass of Antifa members clad in all black marched down Peachtree Street (the media said they were “peacefully marching”) when they finally reached their intended target at Ellis Street and began breaking windows and attacking police cars. Windows were shattered, fireworks were launched at ground level, ATMs were destroyed, and police cars were lit on fire. Molotov cocktails were used extensively. There are currently no reports of fatalities from the event.

CNN’s guest suggests we shouldn’t use the word “violent” to describe the Antifa riots in Atlanta tonight.

Organizers “Stop Cop City” say that the destruction throughout Atlanta on the “Night of Rage” doesn’t count as violence because “destruction of material is fundamentally different from violence.”

Arrests began to be made and it was discovered that a great portion of these antifa members didn’t even live in Georgia, but instead had been trucked into the state for the “Night of Rage.” Some of them were found with explosives on their person.

🚨#BREAKING: Violent protests have been reported in Atlanta

Violent protests have erupted tonight in Atlanta after police killed a man on the 18th. There are reports of police cruisers on fire and rocks being thrown as activists call for a “Night of Rage”. pic.twitter.com/qKTc20g79n

Roughly this same time, there were speculations on social media that the lady who was spraying a fire extinguisher in the Atlanta airport was also a member of Antifa. However, currently, it does not appear that she is actually a member of Antifa, but instead is simply a dine-and-dasher who was upset that she was caught.

These people are incredibly well-organized, incredibly violent, and are conducting active reconnaissance against those they do not like. They are being shipped into areas where they can intimidate and cause damage to further political agendas. (Who do you suspect is doing the shipping?)

They do not have the same moral scruples that you or I possess. Within Marxism, the ends justify the means. They do not view destroying everything that you own as morally repugnant, giving public statements that say it’s only violence if a human being is involved. If they truly believed that were the case, why did they shoot at a cop? Why then did they have a problem with people cutting down trees to build the new training center? Trees aren’t human beings, so no violence could be perpetrated against them then, right? Why then were they occupying the woods in the first place? If murder is robbing a person of their future – their time here on earth – isn’t an act of violence against something they spent a great deal of time on building, such as their storefront also an act against their time? What makes one an act of violence and the other not?

If “destruction of material is fundamentally different than violence,” does that not then make theft legal? Doesn’t this mean all arsonists should ever be released from prison? They didn’t hurt people, just stuff, so that should be okay then, according to this logic.

This is what happens when your morals are built on sand.

Do you know anything else about the events in Atlanta? What is your opinion of these events? Tell us your thoughts on all this in the comment section.