Welcome to the Manipulated States of America 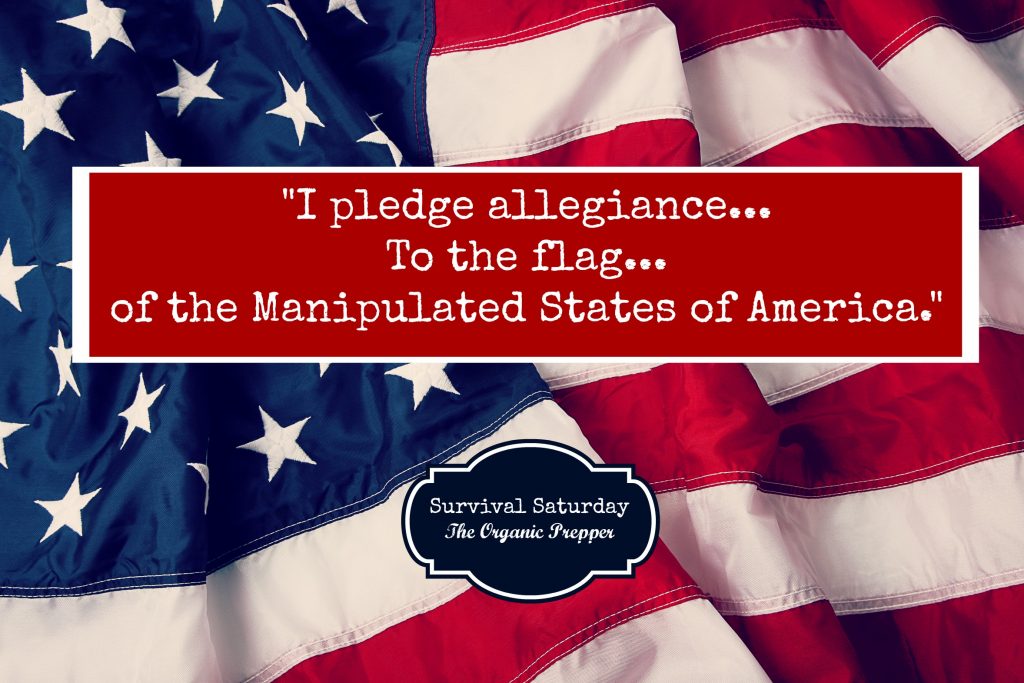 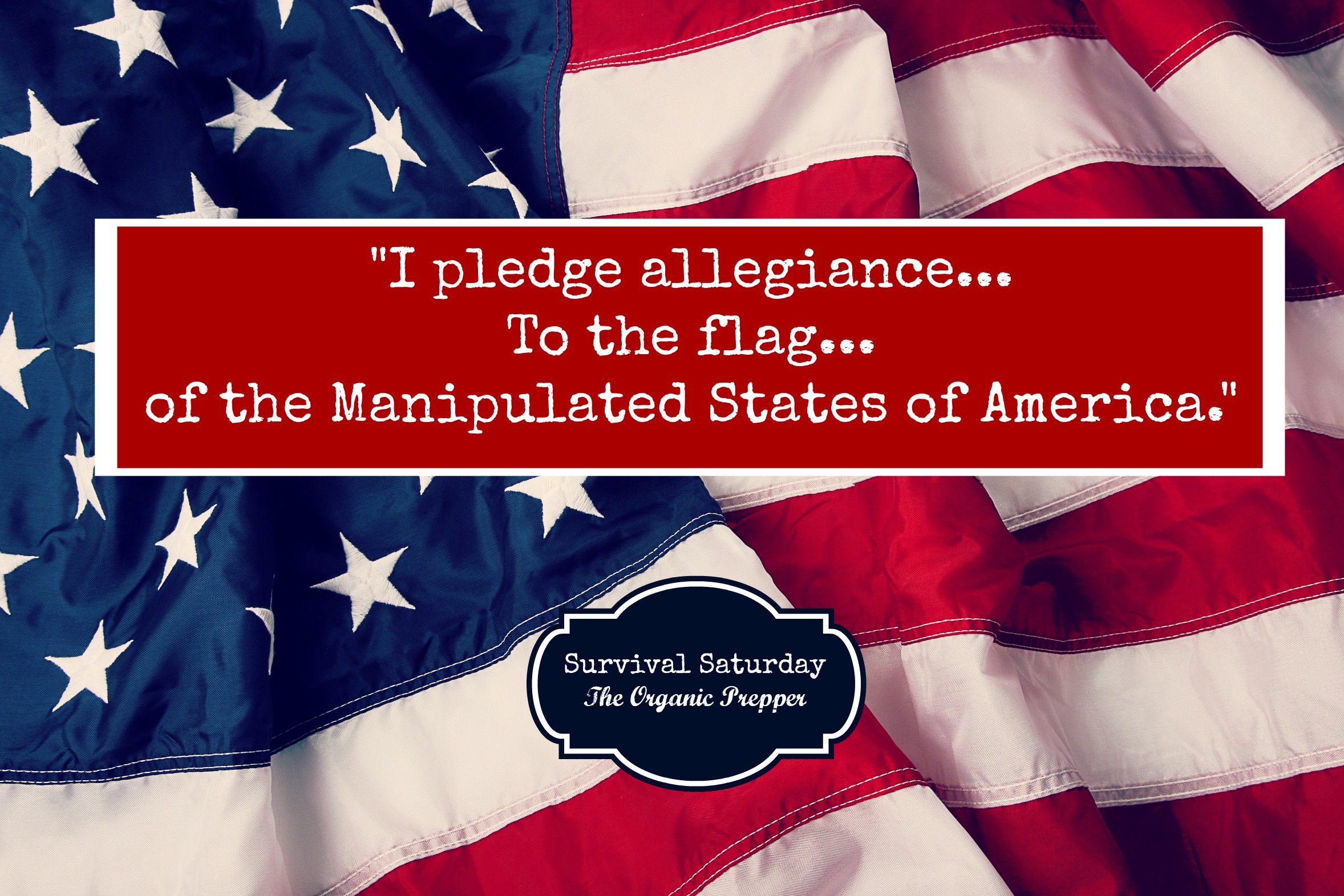 This week on Survival Saturday, we’ll discuss the attempt going on in America to turn our country into a place ruled by manipulation. It’s almost like they’re taking notes from North Korea. Do you really want to live in a place where you know that every public announcement is simply propaganda, designed to distract everyone from to what’s really going on?  Because the Manipulated States of America is fast approaching.

It’s the week before Christmas, and we all know that during the holidays, the sneakiest stuff happens in Washington DC while everyone is distracted. (Think NDAA, for one.) People ignore what’s going on because they’re busy celebrating and spending time with family. When they emerge from the cocoon, some of them realize they were duped, but most just carry on and continue Keeping Up with the Kardashians and believing anything that CNN tells them to believe.

If you haven’t signed up for my daily newsletter, you can do it here. You’ll get a simple tip to help you get more prepared or save more money every day, as well as a round-up of pertinent information, special offers, and breaking news alerts. All presented, of course, with a side order of snarky commentary.

The Leaks Came from Within the DNC, Not from the Russians

This whole last-ditch-effort-to-keep-Trump-out Russia plotline is baseless. The leaks published by Wikileaks came from “disgusted whistleblowers.” According to a report in The Daily Mail:

Craig Murray, former British ambassador to Uzbekistan and a close associate of Wikileaks founder Julian Assange, told Dailymail.com that he flew to Washington, D.C. for a clandestine hand-off with one of the email sources in September.

‘Neither of [the leaks] came from the Russians,’ said Murray in an interview with Dailymail.com on Tuesday. ‘The source had legal access to the information. The documents came from inside leaks, not hacks.’

Of course, the first person that comes to mind is Seth Rich, a young DNC staffer who was murdered in a Washington DC park by a “mugger” (who didn’t actually steal anything after killing Rich.)

We can all breathe a sigh of relief that someone will be making non-partisan decisions on what to censor on Facebook.

Non-partisan decisions funded by the likes of George Soros, Bill and Melinda Gates, and Pierre Omidyar.

What does this mean? Well, according to Zero Hedge:

Of course, that raises any number of questions including what will be deemed to be “fake news” (e.g. will dissenting opinions be deemed “fake”) and who exactly gets to oversee such a powerful position that basically has been given carte blanche to censor media outlets of their choosing?  Surely such an organization would have to be an extremely transparent, publicly funded, bi-partisan group, right?

Well, not so much apparently.  A quick review of Poynter’s website reveals that the organization is funded by the who’s who of leftist billionaires including George Soros’ Open Society Foundations, the Bill & Melinda Gates Foundation, Google, and Ebay founder Pierre Omidyar’s Omidyar Network…

But don’t worry, Poynter would like to assure you that they’re committed to “nonpartisan and transparent fact-checking.”…Of course, as Fox News pointed out back in 2011, it was Poynter that taught a “journalism” class that urged journalists to downplay the threat of terrorist organizations by comparing death tolls of terrorist attacks to those associated with malaria and HIV/AIDS.

Just as the unhappy Powers That Be are trying to overturn the election, they’re also trying to shut down all forms of dissenting opinion. The “fake news” baloney is just as much a false manipulation as the “Russian interference” baloney.  Watch this video to learn how independent media has become a target of the rich, liberal corporations that want to control the narrative.

Will the upcoming Electoral College vote be a coup d’etat?

With the ridiculous new propaganda plotline that the Russian hacked the election as ammunition, more efforts are being made to take the election back from Donald Trump. The Democrats have conveniently forgotten that Hillary Clinton cheated her way into the nomination in the first place, colluded with the media, and sold favors when she was Secretary of State. The media has forgotten that they tried to influence the election by bias, fake polls, and outright lies.

They’re going after an imaginary enemy, and now, members of the Electoral College are investigating the claims of the CIA before they cast their votes. If we have a room full of faithless electors, there’s no telling what might happen next.

This, my friends, is what a soft coup d’etat looks like. And most people won’t even realize what happened.

But if they do succeed in overthrowing Trump, I feel like the riots and angst that occurred after the election will seem mild. The outrage from middle America will be tangible, and it won’t be people taking to YouTube to cry in front of the camera. If you aren’t prepped, you’d really better get going on that. (I can help you!)

Our country is on the cusp of a turning point. The only question is, will we take back our own power and independence or will we give it all away to people who want to enrich themselves by controlling us?

This week underlined the importance of water preparedness for folks in Corpus Christi, Texas, where a chemical spill tainted the municipal supply for more than 300,000 people. (Click here to learn more…)

Other articles of interest this week:

Do you have any news links you want to share? What do you think will be the outcome of the Electoral College vote this week?  Post your links in the comments below. Please join the discussion!