SnugPak Jungle Bag: The Perfect Sleeping Bag for Your Summer Bug Out Bag 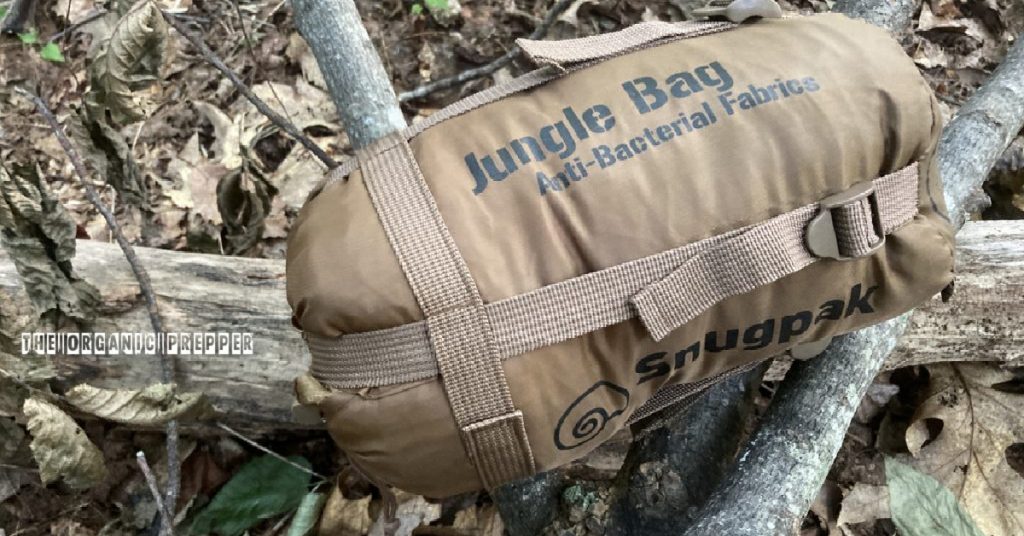 We’ve talked before a bit about emergency sleeping bags and some of my thoughts on those. They’re okay, and they get the job done more-or-less, but they are certainly no substitute for an actual sleeping bag. And let’s be clear, you do need a sleeping bag in your BOB. Even in summertime, the outdoors gets cold at night.

But here are the problems:

Sleeping bags are typically incredibly bulky. Unless you’re carrying a full-sized hiking backpack with you everywhere, you’re not going to be able to fit them.

There are more packable sleeping bags out there, but they’re incredibly expensive. Unless you feel like dropping $200-300, they’re going to be out of reach.

And that’s where we find ourselves in something of a dilemma. We do need a bag, but we need something that will pack down to a reasonable size, and that won’t break the bank in the process. I’ve spent a lot of nights out in the woods, and so far, I can say that I think one of your best options to fulfill these needs is the Snugpak Jungle Bag. 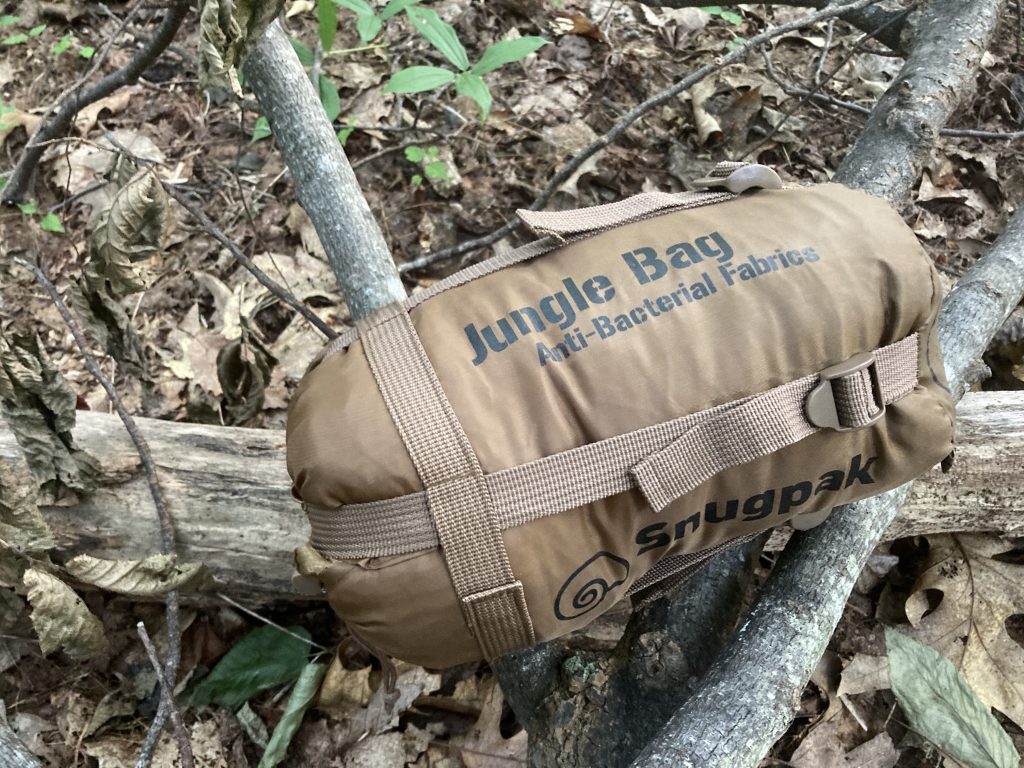 For starters, this pack easily packs down to smaller than a basketball.

That’s a game-changer in the world of sleeping bags. You can easily fit this bag into an assault bag without running out of space. That’s not even on the table with the sleeping bags you’re going to find at your local hiking store.

I packed this out for a night hammock camping deep in the mountains just the other day and was thoroughly impressed here. Typically, I’m the oddball that prefers an external frame hiking backpack. I always strap my sleeping bag into an external hammock/carriage that’s mounted onto the bottom of my pack, right at the top of the hip.

The Jungle Bag was actually too small to fit there. Even with the straps tightened down as far as they could go, the Jungle Bag would just slide right out. To me, one of the reasons I love external frames is that I don’t have to unpack everything to get to sleep at night. The sleeping bag is right there. I don’t like having to stuff in two basketballs’ worth of sleeping bag and try to find space for everything else as well.

If you’re the kind of person that does a lot of traveling and likes to keep a sleeping bag in your car just in case, this is an easy toss-it-in-the-trunk-and-forget-it type of bag that will help to keep you prepared without hogging up all your space as well.

Humidity was easily 80+% when I went out, and temperatures were easily 80+ degrees Fahrenheit as well. In other words, it was dang hot to be backpacking with a 30+ pound pack up a mountain.

It was so hot, in fact, that I found myself drenched in sweat just laying in my hammock on top of the sleeping bag. I think a large part of this was due to my tarp having a reflective surface on the backside of it and blocking any small amount of wind. This was easily the buggiest place I’ve ever camped in my entire life, though, so I wanted to keep the tarp present to help keep some of the gigantic flying things (I’m pretty sure they were new species.) off my face. One half-dollar-sized thing still found its way to my neck, but I kept the rest at bay.

(Talking about sleeping bags…check out our free QUICKSTART Guide to emergency evacuations.)

The cool thing about this was that I didn’t have a problem with the Jungle Bag sticking to my skin, despite being drenched in sweat.

If I had brought my “normal” sleeping bag with that heat, I would’ve been sleeping on fly paper.

Come midnight, the weather turned from smokin’ hot to absolutely frigid (my friend tells me that’s what dating a bipolar person is like), and I quickly woke to try to wedge my way into the Jungle Bag. To anybody who’s ever tried to get into a silky sleeping bag while laying in a silky hammock, you end up looking something like an inch worm on a treadmill. It’s pretty difficult.

The bag kept me nice and toasty, though, so I was happy.

My back got cold, but that was because I didn’t have an underquilt on my hammock (I took it off when I thought I was going to have a heat stroke at 9 PM.). Having your back get cold is an incredibly common hammock camper complaint known as Cold Butt Syndrome, so I don’t attribute that to being a negative towards the Jungle Bag, but instead, just part of hammock camping.

My friend, Yankee, was hammock camping with his Jungle Bag as well and mentioned even his back got cold. It’s just par for the course.

The bag is rated for a comfort level of 45 degrees Fahrenheit and will allegedly keep you alive down to 36 degrees. I wouldn’t pack this in your winter BOB, but in the warmer months, it will serve the job perfectly. It was slightly larger than the SOL Escape Bivvy that I’d previously tested, so I think it makes a no-brainer of a choice between the two: pick the Jungle Bag.

No bugs, no problems.

Mosquito netting is present around the face of the sleeping bag, so you can literally zip yourself completely up in the bag without having to worry about buggies eating you.

You are going to have to wear a billed hat, though, as you sleep to keep the netting off of your face. Otherwise, buggies will still be able to bite you through the mesh, and it’s not really that fun to wake with spiders the size of your palm walking on your nose, even if there is a layer of fabric between you and them. Wear a hat.

I always carry mosquito netting when I go hammock camping, to begin with, but the Jungle Bag already having it makes me wonder if I couldn’t get by leaving it at home. It would give me room for another two meals if I did so and becomes redundant if you’re carrying this sleeping bag.

We did notice that at the foot of the bag, the two zippers left just a tiny amount of space between them where something small could crawl in if it was lucky enough to find the hole. If you’re hammock camping, that really wouldn’t be anything to worry about.

Last time I slept semi-under the stars was in a 3-walled trail shelter. Mice kept running across me, a bat kept flying about two feet over my face, and it was generally unpleasant. If that’s how a trail shelter works, I have no interest in just sleeping on the ground in a field.

What was the final verdict?

I wholeheartedly think the Jungle Bag is a great deal. They run right around $70, pack down incredibly small, are lightweight, don’t stick to your skin if you’re drenched in sweat, are convenient to carry, will keep you warm, and come with their own mosquito netting.

There really isn’t any good reason I could find not to like the Jungle Bag. You can pack it into literally any bag that you carry on a daily basis, and it can easily assist your entry into the semi-mythological field of ultralight backpacking.

My thoughts? Check them out. We liked them, and you will too.

Have you tried this sleeping bag? Do you have another choice for summer sleeping bags? Let’s talk about it in the comments.